Taipei boasts the world’s tallest green building. Amsterdam has a first-of-its-kind 3D-printed Canal House. Singapore is on its way to becoming Asia’s first fully realized smart city. While you might expect to learn more about these breakthroughs in Wired or or Fast Company‘s Co.CREATE, this particular project on urban innovation actually comes from a new content studio, proving once and for all that B2B marketing has evolved way beyond white papers and slideshows.

The international stories are all part of “Future Cities,” a series that explores the future of urban mobility in five locations through videos and microsites. The project is the brainchild of MasterCard and Skift, a global travel news publisher and marketing platform. Launched in July, “Future Cities” also incorporates data from MasterCard’s 2015 Global Destination Cities Index to project models for cities that will exist in years to come. The resulting B2B content, which is both imaginative and razor-sharp, has led target users to spend upwards of five minutes engaging with MasterCard online.

“Future Cities” is the latest in a collection of noteworthy B2B marketing efforts that Skift has produced since launching its content studio, Skift X, last year. The shop has a project manager, developer, and designer on hand, and Skift’s senior editor works with a pool of freelance journalists to create its expert content.

“We set the bar high for ourselves so that global brands like MasterCard would start to tap into us to reach that global travel audience,” said Matt Heidkamp, branded content strategist at Skift.

Sponsored content is becoming a sizable part of the company’s revenue, which also includes trend report subscriptions and the Global Forum, a “creative business conference” for the travel industry that Skift launched last year.

In the case of “Future Cities,” the opportunity evolved from an existing relationship between Skift and MasterCard (the brand is a Global Forum sponsor). When the two began to discuss additional strategies for highlighting the Global Destination Cities Index, they hit on the idea of a video-rich microsite on the model city of the future.

“Over fifty percent of the world’s population now lives in cities, and by 2050, the United Nations expects that number to increase to sixty-six percent. There will be some big issues affecting travel,” Heidkamp said. “We figured this would be an interesting way to promote MasterCard’s insight and position it as a thought leader.”

While the campaign drove downloads for the report, MasterCard’s main goal was to connect with smart travel influencers, government agencies, and tech companies to boost awareness of the company’s involvement and advocacy role in the smart cities space.

“So far, we’re very happy with the quantity and quality of the engagement and the interest the stories have created in the travel and smart city community,” said Bernhard Mors, MasterCard’s vice president of corporate and digital communications. Mors also noted that Skift and MasterCard share a fascination with the intersection of travel and technology. This, along with the publication’s “fresh approach to storytelling,” are what prompted him to partner up with Skift.

The result is native content that goes far beyond the sponsored articles and trend reports normally associated with B2B marketing. At the same time, Heidkamp stressed that the stories adhere to journalism best practices and are clearly marked as sponsored content.

“We hold [the content] in very high regard, and our editorial team in high regard too,” he said. “We’re really trying to convey the message that B2B doesn’t have to be boring.” For Skift, “Future Cities” has proven to be a high-profile case study that shines a spotlight on the huge creative potential of B2B marketing content. Since going live, the microsites have each driven between 10,000 and 20,000 pageviews.

“We really want to get these B2B brands earned media—get them out of their shell and thinking in a big-picture way,” Heidkamp explained. “The more interesting, the more you get noticed by people, so you’re not necessarily pushing someone down the sales funnel but starting a conversation.”

Besides MasterCard, this strategy is also working for both Travel Channel and Amadeus, a travel company that provides search, booking, ticketing, and reservation technology.

For Travel Channel, Skift X created Moving Images, which explores “the new era of travel video.” Travel Channel is using the site to remind advertisers that it’s not only a TV network, but also a top content destination across platforms. The projects use drones to shoot video footage, provide useful information like proprietary traveler surveys, offer video marketing case studies on organizations like Travel Oregon, and more. 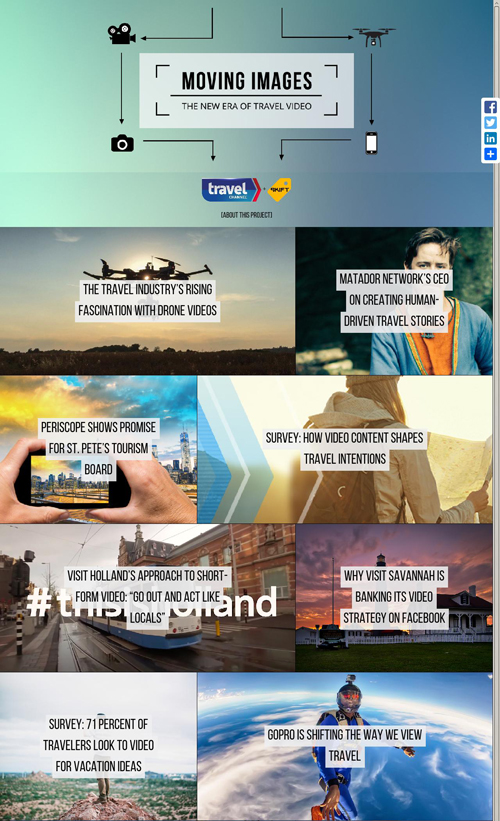 Skift’s gameplan for Amadeus was to develop a video series about the startup mentality and what it takes to become an innovator in the world of travel tech. The Takeoff, which launched in September, consists of three short videos and a collection of 40-second clips that address high-level topics like vision, adaptability, and connectivity through interviews with five startups. To boost the campaign, Skift also wrote a position paper called “Building the Future of Travel: 5 Takeaways for Startups.”

“This is a good case study of a B2B brand wanting to do something big picture but still having the need to produce leads through the report,” Heidkamp said.

The work coming out of Skift X tells of the current B2B marketing mindset: data-rich but dry webinars and slideshows are being supplemented with vibrant content that is just as entertaining as it is informative.

“We’re working as an extension of these brands’ marketing teams. We know what kind of content works for our audience,” Heidkamp said. “We have this motto that we build around trend lines, not headlines.”