These Absurd Ad Campaigns Will Actually Brighten Your Day

Ad campaigns aren’t all fun and games. But sometimes, they are just that.

These six campaigns won’t just make your day a little bit better. They’ll prove that sometimes being ridiculous is an intelligent brand strategy.

1. Poo-Pourri: “Imagine Where You Can GO”

How many air freshener ads just show someone spraying the product in the air and smelling it? Trick question. The answer is too many, and none of them are entertaining. Thankfully, Poo-Pourri realizes that at base level, nothing is funnier than, well, poo. Behold, the company’s latest masterpiece: a music video with better production values and more euphemisms than you ever thought possible. Keep an eye open for the Beyoncé impersonator, the dance number on top of a toilet, and the poop magician.

This video is true advertising genius. In its first day online, it already had more than 120,000 views and a mention on Adweek.

Points for: “Download a brown load” and “when nature booty calls my phone.”

Underwear companies have plenty of opportunities to be funny, but somehow they keep releasing the same “sexy person looking sexy in our sexy underwear” spots, in case you hadn’t already made the connection. Thankfully, Tommy John has stepped in to fill the metaphorical gap.

Tommy John’s most recent commercial, “Crotch Creep,” highlights how dangerous a pair of uncomfortable undergarments can be. To put it bluntly, you end up frightening anyone who sees you itch your crotch.

Check out the ad below and remember: No one wants to be a crotch creep.

Points for: the man who manages to do a full-on plié in a suit. That takes skills.

Cats make everything better, up to and including college lectures, and cat food brand Whiskas proves it in their adorable and mildly educational YouTube series “Kitten Kollege.” Naturally, the purpose of the kollege is to “raise today’s kittens to be tomorrow’s cats.”

The clips in the promotion cover a range of subjects, from “How to Choose the Right Kitten” to “Litter-Training Kitties,” but the best of the bunch is probably the introductory video:

And with that, you’ve fulfilled your recommended daily cuteness intake. You’re welcome.

Points for: the little textbook that says Katka. And the two drunk kittens making out.

Notice a theme here? When you’re going to look ridiculous no matter what, you may as well embrace it. What’s funnier than a story narrated by two testes? Probably nothing. Trust us, this ad is nuts (sorry, had to).

Whoever thought of representing the male anatomy with golden egg chairs is a beautiful genius.

Points for: two men, dressed as testicles, screaming for an extended period of time.

This commercial is exactly what would happen if the sexy Axe man lived in the middle ages—and appeared in an ad for a pooping stool. The script is absurdly hilarious and manages to pack in a surprising amount of information about bowel anatomy. Now you know that people were meant to go to the bathroom squatting, not sitting.

This commercial clearly made a mark—the video has over 5 million views. The lesson: Bathroom humor always wins.

Points for: the phrase “a smooth stream of fro-yo that glides like a virgin swan,” and also little kids eating unicorn poop.

When the mayor of Niagara Falls discovered that only 4 percent of his residents recycled, he decided that his town needed a new recycling program. Obviously, that program needed a mascot. A walking globe? Nope. An anthropomorphized recycling bin? Guess again. No, Niagara Fall’s mascot for recycling is… 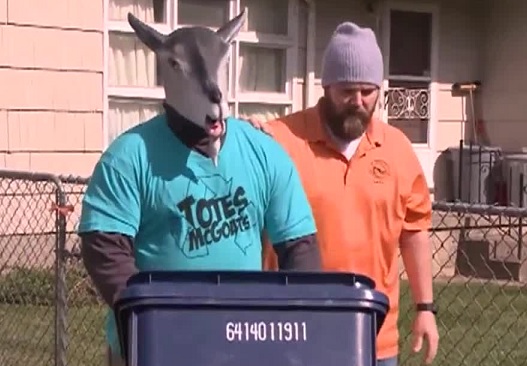 Yes, Totes McGoats is horrifying, but he’s also memorable. This planet-loving mountaineer made headlines in Cosmo, Mashable, and Time. Plus, he’s a huge hit on Twitter:

"Niagara Falls needs a mascot for recycling. Ideas?" "My kid has a spare goat mask from Amazon." "Meeting adjourned" pic.twitter.com/9RNLG4fYCW

Sure, everyone is calling him scary—but any publicity is good publicity, right? And in a crazy twist, Buffalo News revealed that Totes is a former heroin dealer who’s trying to clean up his name. Really.

What counts is results, though, and it turns out this masked man has been doing a great job. Since Totes McGoats arrived on the scene, recycling in Niagara Falls has gone up from 4 percent to 23 percent. Now that’s content ROI!

Next time you’re stuck and trying to find your way past a creative dead end, remember that people actually clicked on a video of two guys in nude bodysuits sitting in egg chairs. There are thousands of inappropriate euphemisms out there. It’s just a matter of finding the one the ones that audience everywhere will love.