“Dude, this app update description is freaking awesome” is not something I ever thought I’d say. But here we are.

Monday’s 4.3.1 update to Tumblr’s mobile app comes complete with a short story that mythologizes this otherwise routine update. It has everything: imagery of David Karp bursting out of his shirt like Fabio on a romance novel cover; every short story cliché imaginable; even a board room slow clap. It’s a weird piece of tongue-in-cheek humor and shows that Tumblr understands its quirky user base perfectly.

Personally, I hope this starts a trend, and during the next Facebook update, we’re treated to an tale of Mark Zuckerberg sprinting down the beach, the sun shimmering off his Instagram-filtered skin.

“4.3?” roared David Karp across the boardroom table. He spun on his heels, turning his back to the board. His shoulder muscles rippled through his gingham shirt.

“4.3? We can do better than that. We HAVE to do better than that.”
The boardroom broke into murmurs. They had done everything right with 4.3. The entire company, top to bottom, had signed off on it. The research was there. It was focus-grouped for 10 months straight. It was a sure-fire hit.

An executive VP piped up. “But, David, 4.3 is the msot market-tested product we’ve ever released! The approval numbers are off the charts!

David’s hand came smashing down on the luxurious mahogany slab. Glasses rattled. A ballpoint pen was sent flying. “I don’t give a darn about the numbers! What happened to doing something because you gave a flying flip about it? What happened to the passion? Numbers? The other guys can have numbers. We’ve got to have passion, or we’re not worth the CD-ROMs we’re printed on. Passion. That’s what it’s all about. That’s why we’re here.” David gestured behind him, toward the plate-glass window, the Manhattan skyline sparkling beyond. “We do it for them. For the common man. The common man needs Tumblr now more than ever.”

He spun again, now facing outward onto the city he loved. From every street rose a memory. Lexington Avenue, where he learned to ride a bike, and where he got his first broken arm (Maury, who owned the bagel store, came running out when it happened. Good old Maury). Bleecker Street, where he got his first kiss, and saw his first real rock’n’roll show. The Velvet Underground. A sound so raw and real it could only come out of NYC. Finally, he looked down directly on to the street below. The street on which he’d built his business … no, not his business – his dreams. Below was a street on which the creative passions of millions of users had stacked up into a 431-storey skyscraper that housed the collective energy of Tumblr.

David Karp pressed his nose against the glass and looked deep down into the canyon of 431st Street. Four-three-one. That’s when it hit him.

“Four-three-one. That’s it. Version 4.3.1 of the Tumblr app for iOS.” Silence fell over the board room. The air around the one-of-a-kind, designer table was think with uncertainty.

Then came the sound, ringing out like a shot. It was a handclap. The executive VP has risen to his feet. Another handclap erupted from his palms. His muscular, deliberate applause electrified the room.

The next thing David knew, the entire board was on its feet. Clapping, stomping, hollering. The sound was thunderous, deafening. This was it. This is why he had followed his dream in the first place. This…

Read the full text below. 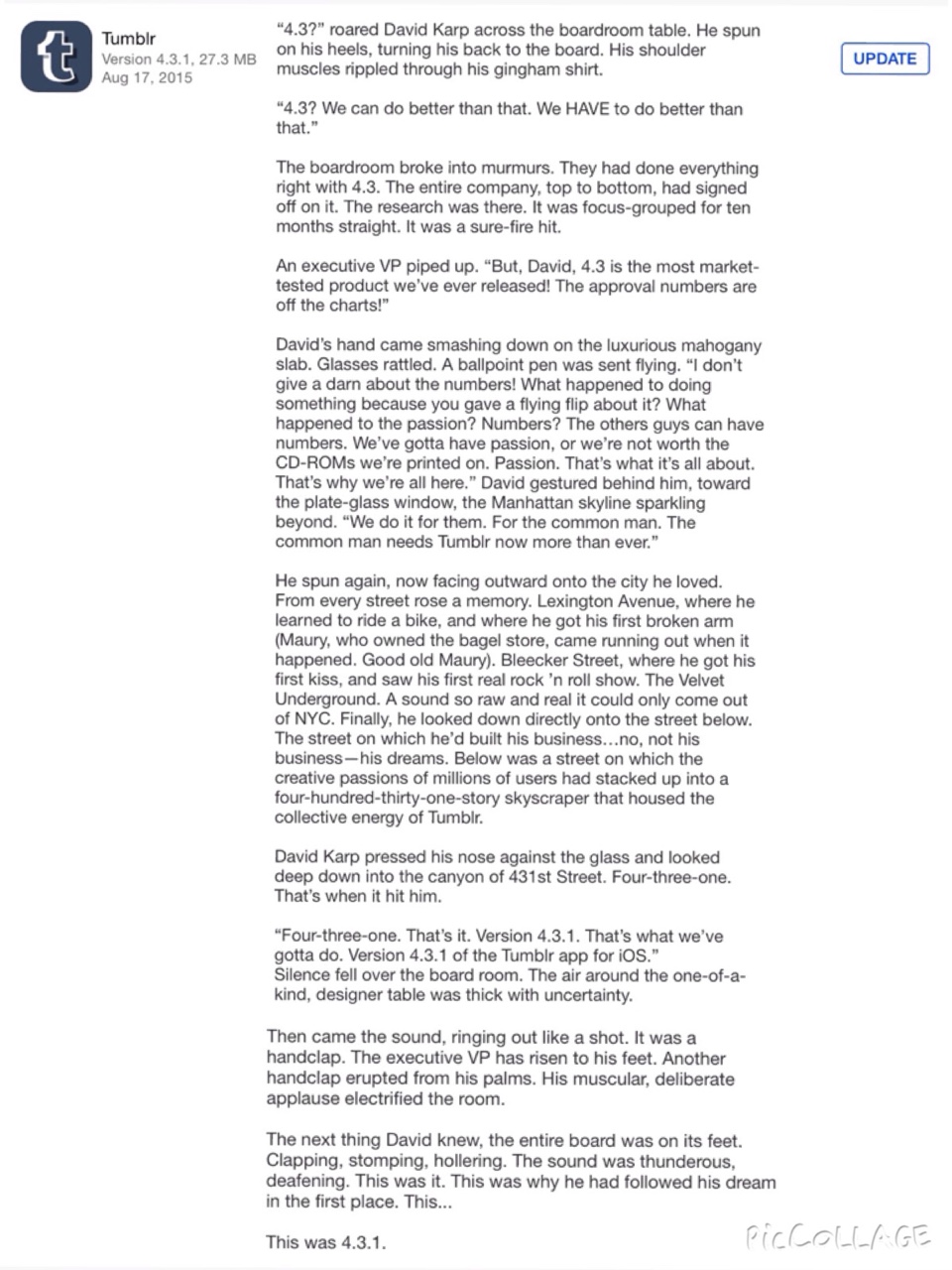