Periscope, the new live-streaming app acquired by Twitter, was only out in the world a few hours before it was put to the test. When a building exploded in the East Village yesterday, Twitter sales rep Tim Geisenheimer live-streamed the aftermath on the app, and one writer for The Verge found himself watching live Periscope video from the scene before news cameras even got there. One day earlier, these citizen journalists wouldn’t have had the tools to do live newscasting—unless, of course, they were using Meerkat.

Meerkat, the first mobile live-streaming app to really gain some popularity, launched in February and quickly attracted high-profile users like Jimmy Fallon, Julia Louis-Dreyfus, and Al Roker. The app also became the new darling of the tech community at this year’s SXSW, giving people the opportunity to live-stream panels, parties, and demos. But now that Periscope is on the scene—Twitter acquired it in January for $100 million—Meerkat may have some catching up to do.

There is one major distinction that gives Periscope the upper hand over Meerkat: on-demand video. Meerkat videos can only be watched while they are being recorded, while Periscope videos can be saved and played back by viewers. However, these replays are only accessible for 24 hours, like the content on Snapchat’s Discover platform. Periscope also lets creators privately broadcast to specific people and take their video down after the live-stream is over, if they choose. 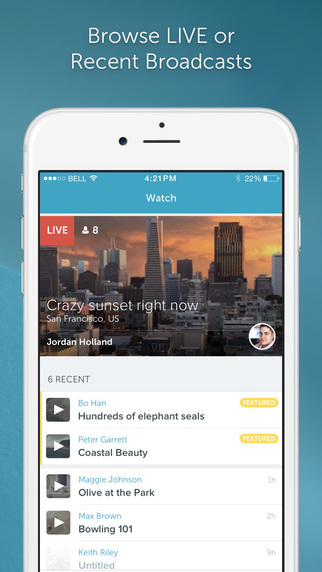 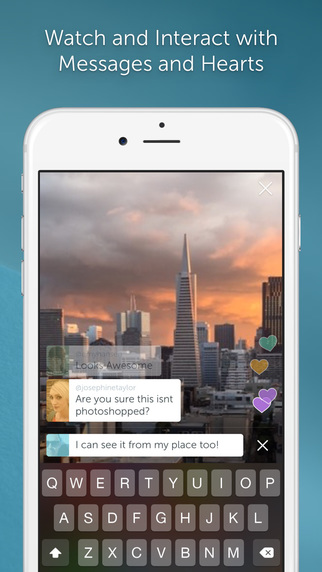 This playback feature is crucial since it makes Periscope a designated content hub users can browse through, binge-watch, and discover new content, whereas Meerkat is just a tool for live-streaming. To encourage viewers to access these features, Periscope greets users with a list of recent streams and three featured videos at the top of their feeds.

In terms of interaction, Periscope users can comment on videos while they are streaming, and “Like” the videos as many times as they want. There’s no binary of “Liking” and “Unliking” here. On Periscope, each “Like” prompts an animated heart to burst onto the bottom right corner of the screen. So any video getting a crazy amount of endorsements will have a lot of bubbling hearts, which is a superficial but generally endearing feature.

When viewers play a video back, comments and hearts pop up as they did when the video was live, so viewers catching up can experience the event in a similar fashion to those who watched it live, which can be particularly helpful for Q&As with crowdsourced questions.

As for Meerkat, when it comes to interaction, its founders may have set themselves up for failure by integrating the app’s entire system of distribution and engagement with Twitter. When Meerkat users start a live-stream or comment on an existing one, notifications are sent out to their Twitter followers. However, once Twitter prepared to launch Periscope, it also put restrictions on Meerkat’s access to the network’s social graph, preventing Meerkat from pushing notifications to its users directly on Twitter.

Still, that’s not to say Periscope’s integration with Twitter is completely thorough. Periscope users may actually have the opposite problem—getting bombarded by too many notifications. Users have to sign in to the new app with Twitter, which will suggest people to follow based on your followers; anyone can also choose to send notifications through Twitter, including when you start broadcasting, when someone you follow starts broadcasting, and when someone you follow recommends a broadcast from someone else. This overload of notifications seems to be the biggest complaint among early Periscope adopters, and something Twitter should look into improving.

Aside from that, if Periscope really wants to take down Meerkat, it should provide an option to schedule a stream for later and notify viewers so they can plan to tune in—a feature that Meerkat already offers, and, needless to say, YouTube does as well.

Speaking of YouTube, what could truly launch Periscope is a new round of digital creators who build their audiences natively on the platform, like many have done with Vine (which Twitter acquired), Snapchat, and YouTube. YouTube stars, who are used to setting up live-streams for their fans, will likely soon begin experimenting with engagement on the platform. In fact, Gary Vaynerchuk already started using Periscope to live-stream the process of filming his YouTube Q&A series.

It shouldn’t be long before swarms of celebrities, brands, and publications start adding Periscope to their social media docket. To kick things off, big name brands such as Marc Jacobs, H&M, and Puma have signed up, and DKNY used the app to provide a behind-the-scenes look at the DKNY closet. Shonda Rhimes, Tyra Banks, and Mark Cuban have also tried their hands at posting (Periscoping? Scoping?).

Meerkat’s fight is far from over—the company just received $14 million in funding—but there’s no denying that Periscope has a lot more potential for reporting and audience-building. Users should expect to see more high-profile names broadcasting their own mobile news stories, but hopefully for less tragic subject matter than yesterday’s building explosion.

Update: A new chart from Topsy shows a damning bit of data for Meerkat—within 24 hours, Periscope’s popularity on Twitter caught up to Meerkat’s: