The Mighty Ducks: The Story Behind the NHL Team That Doubled as an All-Time Great Marketing Stunt

In the early 1990s, hockey was booming in the United States. Bolstered by Wayne Gretzky’s 1988 move to Los Angeles—known in the hockey world as “The Trade”—and the NHL’s expansion to new American markets such as San Jose and Tampa Bay, hockey had suddenly found legitimacy after years of relative cult status among American fans.

In 1993, the NHL’s newest expansion team, the Mighty Ducks of Anaheim, took to the ice after an excessive 15-minute opening ceremony that featured such gems as an electric guitar rendition of Disney’s latest soundtrack hit, “Be Our Guest,” and the call for fans to blow into their plastic “duck calls.” Hockey history was being made.

But what about marketing history?

Looking back, it’s difficult to fully grasp just how bizarre the creation of the Mighty Ducks of Anaheim was. Disney, the family-friendly all-American media titan with no history of sports management, had formed a professional sports team. And not just any team: a hockey team. This being the sport in which brutal fights are commonplace, teams have nicknames like the Broadstreet Bullies, and most of the loyal fan base is Canadian.

So what did Disney do? They named their team after a G-rated kids’ movie.

Michael Eisner had always been a hockey fan. He grew up rooting for the New York Rangers during his childhood in Manhattan and was a regular attendee of Kings games while working in Los Angeles. It wasn’t until his sons starting playing youth hockey that he really came to love the game.

But Eisner was more than just a man with a newly found love for hockey. He was also the Chief Executive Officer of Disney from 1984 to 2005.

While the NHL was rapidly expanding its product to America in the 1990s, Eisner and Disney had laid out an ambitious growth plan of their own. During the so-called “Disney Decade,” Eisner built new parks such as Disneyland Paris, Disney’s Hollywood Studios, Disney California Adventure; acquired new media holdings like ABC, ESPN, and Miramax; and produced more films than ever before.

One of those films became the first major studio children’s hockey movie: The Mighty Ducks.

Taking advantage of hockey’s newfound popularity, the film managed to surge past box office expectations despite being universally panned by critics.

“The Flying V,” the endearingly ridiculous and somehow unstoppable formation used by the team, became part of every young hockey fan’s street hockey games, while chants of “quack, quack, quack” could be heard in elementary schools across the country. A movie franchise had been born.

Yet unbeknownst to the cast and crew of the original film, Eisner and Disney would soon have much bigger plans for the Mighty Ducks franchise.

The Mighty Ducks become a reality

“The [movie] was our market research,” Eisner said in a 1992 Los Angeles Times article.

A Mighty Ducks NHL team presented an array of possibilities for cross-promotion, as well as the opportunity to create an entirely new line of revenue for Disney and its various partners. The NHL and the city of Anaheim, meanwhile, also had plenty to gain from Disney’s leap into professional sports. Fueling the push to create the team was the kind of marketing synergy most brands only dream of—a synergy in which every partner earned exposure and revenue as long as the overall Mighty Ducks machine was successful.

For the NHL, the benefits were obvious. Bringing in an American media giant to create a team with a built-in fan base was an absolute coup for the continent’s smallest major sports league, and many in the sport were ecstatic to have Disney’s proven marketing chops on their side.

“They are outstanding marketers,” Fred Comrie, a former managing general partner in the International Hockey League, told the LA Times. “And if they can start drawing and start getting people interested in hockey, it’s a major plus for us.”

The Mighty Ducks also represented a saving grace for the city of Anaheim, which had built a sports arena without a dedicated tenet in the hopes of luring a major league team. The arena eventually became the Pond—which now has the less thematic name the Honda Center.

Disney was not simply being altruistic by bailing out the city’s risky investment: The company had invested heavily in Anaheim with the hopes of making it a centralized tourist destination. Disneyland, also located in Anaheim, was undergoing major expansion, and Disney had recently purchased KCAL-TV, a local cable channel.

“Hockey is great for the Disney Co.,” Eisner told the LA Times in 1993. “It’s possible the Ducks will be on Channel 9 (Disney-owned KCAL-TV), we’ll have Duck merchandise in our Disney Stores, and hockey-related shows on the Disney Channel. And I’m sure there will be some Mighty Duck parades down Main Street in Disneyland after we win 39 games our first season.” 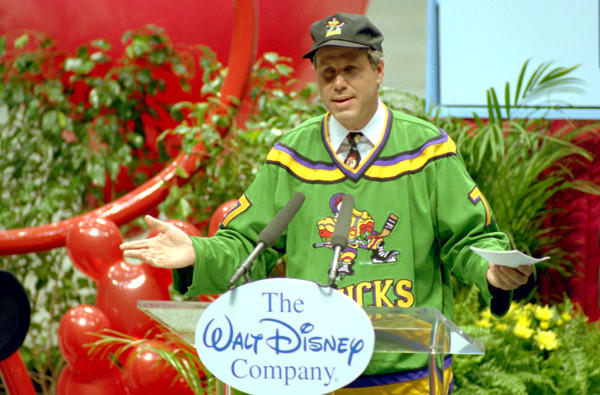 The initial investment was not even that steep for Disney’s deep pockets. “At $50 million, it’s not a meaningful part of Disney,” Lisbeth Barron, an analyst for S.G. Warburg, told The New York Times. “Typically, it’s not the type of investment that you get a short-term return from, but if they can exploit it for other filmed and entertainment products, they have a good chance at longer-term profits.”

Considering the circumstances, the reimagining of the relationship between marketing and sports was more than just a radical publicity stunt—it was good business.

A brief empire is born

Though the creation of the NHL team in 1993 was the most innovative step for The Mighty Ducks franchise, in reality it was just one part of a massive cross-promotional effort that fit seamlessly within Disney’s powerful media machine.

Two more films were to come, with the not-so-creative names of D2 and D3, which featured the redesigned logo and colors of the NHL team. NHL stars such as Wayne Gretzky, Chris Chelios, and Paul Kariya, the captain of the real Mighty Ducks, made cameo appearances to promote the films and the sport of hockey in general.

Then came an animated TV show that aired on Disney-owned ABC and focused on the team’s mascot, Wildwing. The story is a convoluted tale of an alien race of hockey playing ducks who are attacked by an evil reptilian horde and have to escape through an inter-dimensional portal to—you guessed it—Anaheim, California. There, they are discovered by a general manager who makes them into an NHL team that plays at The Pond. The show’s first three episodes were eventually stitched together to make an animated movie, Mighty Ducks the Movie: The First Face-Off, that turned out to be the franchise’s last media property.

In addition to the movies and television shows, Disney also created multiple theme park attractions, including an odd pinball machine, a Ducks-themed pool, and a ton of merchandise.

For a while, Disney’s cross-promotional surge worked incredibly well. The team ranked among the highest in the NHL in merchandise sales and was a “cash cow,” according to the LA Times. In 1997, the original film’s screenwriter, Steve Brill, even sued the company for five percent of the profits, arguing that the team was part of the first film’s merchandising efforts.

A Variety article covering the legal case cites some astronomical numbers from Brill’s complaint that demonstrate the team’s merchandising dominance. At one point, The Mighty Ducks merchandise outsold all other NHL teams combined and accounted for an unbelievable 80 percent of the NHL’s $1 billion in merchandise sales.

Despite all of Disney’s best efforts at brand synergy, the franchise became a financial dud about as quickly as it rose to success. Entropy, like always, had a large part to play. What had started out as an uplifting kids’ movie about underdogs had turned into a capitalistic machine of sequels and plastic toys—for fans, the initial excitement of the stunt had worn off.

The team started to hemorrhage money by the early 2000s, and Disney failed in its attempts to create ESPN West, which, if everything had gone to plan, would have featured the games of both the Mighty Ducks and Disney’s other newly acquired team, the Anaheim Angels of Major League Baseball.

Some of the blame also lies at the feet of the NHL, whose product experienced a slow but painful decline, known as the “dead puck era,” that affected every team in the league. Scoring reached an all-time low, which turned off casual fans and led to a decline in attendance and enthusiasm for most of the league. Additionally, the league’s labor issues led to an unprecedented cancelled 2004-2005 season, which proved to be the killing blow to an already struggling Mighty Ducks team, which was sold in 2005 and stripped of its Mighty Ducks branding. As a whole, the NHL had floundered its chance to ride the wave of popularity that had marked the early ’90s.

Disney had problems of its own, culminating in the ousting of Eisner in 2005; that this was the same year the company sold the Mighty Ducks likely wasn’t a coincidence. Roy E. Disney, son of Walt, claimed Eisner had turned the company into a “rapacious, soul-less conglomerate.” Many thought Disney had lost its traditional way in the name of expansion, which mirrored many of the complaints aimed at the NHL. The Mighty Ducks were one of the most visible examples of this expansion—the team’s sale was both a clean break from Eisner’s ambition and a return to the traditional roots of the company.

The economics didn’t make much sense for Disney either. Faced with a difficult climb back to financial stability thanks to the NHL’s uncertain future and dampened excitement for the franchise as a whole, the Mighty Ducks simply weren’t worth holding onto for a company that, in the new regime’s eyes, had no business owning an NHL team in the first place.

The Mighty Ducks had come crashing down, and the NHL and Michael Eisner fell along with it. In a cruel twist of fate, the Anaheim Ducks won the Stanley Cup in their first season under new ownership, becoming the first California team to ever win an NHL championship.

Though Disney’s radical experiment failed, their ambition can’t be faulted. Eisner and company had tried to create a cross-media empire that had never existed before—one that, at least for a bit, seemed destined for massive success.

The future of sports sponsorship

Though it’s tempting to paint the story of The Mighty Ducks as a cautionary tale in over-expansion, it’s hard to ignore the larger impact the franchise has had on sports and marketing over the last couple of decades.

Since Disney created a branded sports franchise in a major American league with relatively little backlash, picturing another branded sports team in the NFL, NHL, MLB, or NBA doesn’t seem all that preposterous. In fact, there have since been attempts at branded sports teams, like when FedEx tried to rename the relocated Vancouver Grizzlies team the Memphis Express in 2001.

The enduring cultural relevance of the Mighty Ducks is also a testament to Disney’s intelligent positioning of the team and movie franchise. Indeed, nostalgia for the franchise still runs high to this day, whether in the form of syndicated reruns of the movies, fan-made merchandise available on Etsy, or Time‘s oral history.

It’s also important to remember the dominant place the team held in hockey merchandise sales—again, 80 percent of the market—which suggests that branded teams can succeed financially.

When that day comes, all of those brands and sports teams that will make money off of cross-promotion will owe Disney a big thank you. Or maybe, in this case, a good old-fashioned quack chant.