For Legal Marijuana Companies, Branding Is a Slow Burn

The launch of Marley Natural is part of a larger trend of new canna-businesses relying on branding to garner legitimacy and respect in the newly regulated marijuana market. Marijuana and Marley might seem like a pretty obvious branding marriage, but Marley Natural’s sophisticated logo is an example of how brands are attempting to overcome weed’s existing stigma while educating skeptics about the legal marijuana movement.

So far, brands like Marley Natural are veering as far as possible from your typical stoner imagery to something much more elegant and cultured. Marley Natural used the same agency that paired Starbucks with its iconic mermaid to design its subdued yet impactful logo.

With such a newly-legalized substance hitting the market, cannabis capitalists will need to be sensitive to how the consumers will, quite literally, want to hit the product. Ganjapreneurs must understand they are not just promoting their product—they’re also spokespeople for the widespread acceptance of the drug itself.

According to Marley Natural’s website, the company’s mission is to “champion Bob’s voice and his insight to help people realize the positive potential of cannabis for the mind, body, and spirit. Along the way, we want to help undo the suffering and injustice of cannabis prohibition around the world.”

Yet spreading joints for justice, or any form of marijuana advertising for that matter, already faces public adversity. A survey conducted by DrugFree.org found that out of 1603 American adults surveyed, 80 percent were against ads for weed even if it’s legalized in their hometown. It’s important to note that the study has some inherent bias: 1200 of the participants were parents of young children. Still, 70 percent of those surveyed actually favored marijuana legalization for medical purposes. This suggests that potential weed advertisements, and children’s potential exposure to them, seem to be more taboo than the drug itself.

Tech titans like Apple have been sensitive to these concerns, throwing around their weight in the weed market by vetoing or approving cannabis-related apps available on the App Store. In the past, Apple has been very finicky with how these apps brand themselves to their customers. Late last year, MassRoots, a cannabis-centered social networking site, was approved for purchase on the App Store—but only once it included geo-location software to ensure that downloaders were installing the app from one of 23 states where marijuana was medically legal.

Leafly, an app also funded by Privateer Holdings, offers reviews of strains and dispensaries for medical marijuana. The app is offered on the App Store, and may be the best example of successful weed branding. You may remember their full-spread ad in The New York Times this summer in honor of the legalization of medical marijuana in New York. It garnered a lot of attention, mostly because it was one of the first legal weed ads to run in a national newspaper. But the ad itself was quite tame, its branding largely on par with mainstream pharmaceutical ads.

The advertisements aim to discount the stigma left by preexisting anti-drug campaigns, which, according to their website, fail to “prepare people for the scientific, socio-cultural, and legal realities of marijuana in America.” 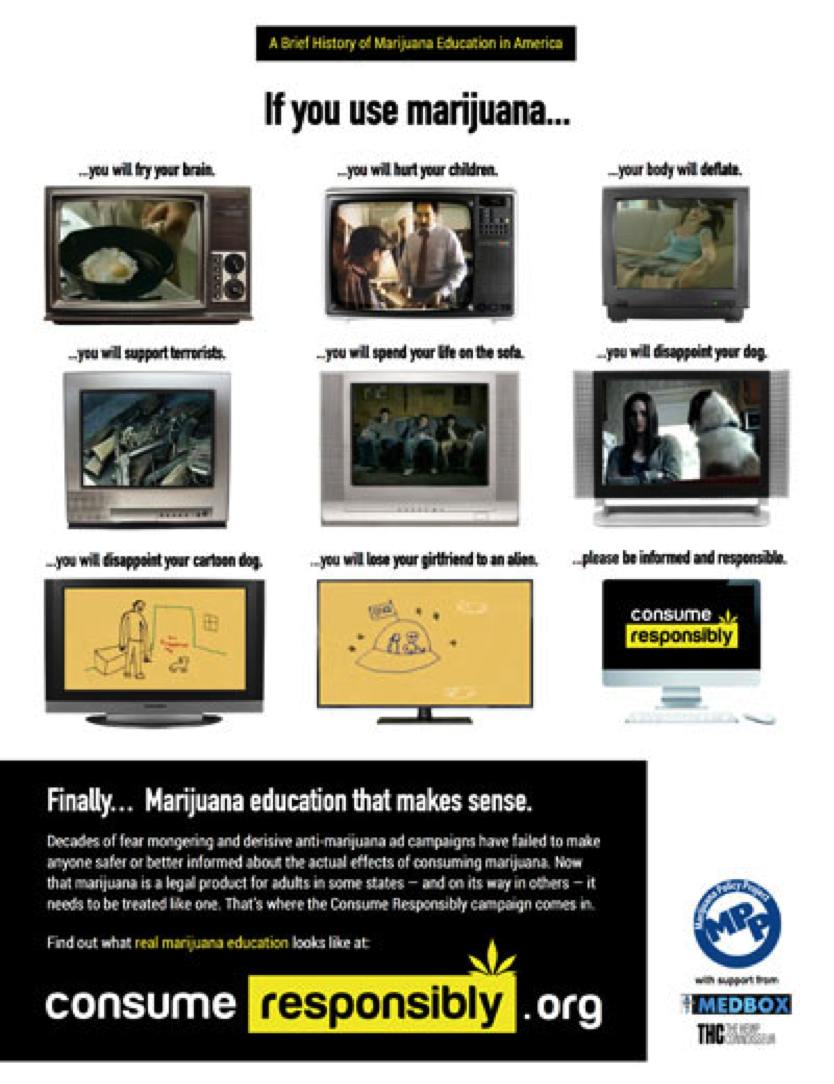 For those who already know how to consume responsibly, cannabis companies are also beginning to offer legal weed as a product meant to be savored with sophistication—similar to wine or craft beer.

Take, for example, Marvina, the new high-end weed-of-the-month delivery service that sprouted out of San Francisco. A subscription will connect cannabis connoisseurs with dispensaries to provide top-shelf strains brought right to your door. Their packaging looks almost exactly like Birchbox, except for the products inside, of course.

Even though these pot enterprises are trying to look classy and natural and offer a product that consumers can trust, it still might take a while for the public to warm to the branding. Like other legalized drugs such as alcohol and tobacco, marketing for weed is going to be significantly more challenging than for your average consumer product due to government regulations and the potential for public backlash.

Nevertheless, as we’ve seen, venture capitalists and pot barons are itching to grow in this burgeoning industry (worth $50 billion in the U.S. alone). Focusing on education and changing marijuana’s unsavory image seems like the right start, but advertisers and marketers must tread this newly tilled territory rather softly if they hope to have long-term success.