The Best 5 Christmas Ads So Far

The holiday ads started rolling out a tad early this year—over a month before Christmas. For your sanity, we held off on covering them until now. You’re welcome.

With that said, a slew of amazing holiday commercials have been released since the candy came out on Halloween. Here are the five that we think top the rest:

This tear-jerking commercial by British supermarket chain Sainsbury’s skyrocketed to the number one spot on Ad Age‘s Viral Video Chart when it came out. “Christmas 2014” is inspired by the true story of the ceasefire between British and German soldiers around Christmas in 1914. Every second of the four-minute short is packed with such emotion that the viewer can’t help but remain riveted. “Christmas 2014” has currently been watched over 13 million times:

Director Ringan Ledwidge revealed in a behind-the-scenes video that his grandfather died in World War I. As a result, “Christmas 2014” has a sincerity that is rare in ads. As Ledwidge said, “You owe it to them [the soldiers] to get it right.”

If you’re an easy crier, don’t watch this one in public. Personally, hearing “Silent Night” sung on a war-torn battlefield is enough to send me over the edge.

This ad from British department store chain John Lewis, which tells the story of a little boy and his best friend, Monty the Penguin, has been out for under a month and already has a whopping 19 million views. It’s no mystery why: Penguins jumping on trampolines and falling in love are a recipe for adorable overload. Damn it, I’m crying again.

But John Lewis’ hit commercial isn’t just a video alone. Viewers can continue their penguin experience online by playing with an interactive storybook called “Monty’s Christmas.” There’s even an incentive to stop into a brick-and-mortar store.

Every John Lewis shop now has its own “Monty’s Den,” complete with games, a photo booth, and virtual-reality goggles that transport customers to the Antarctic. 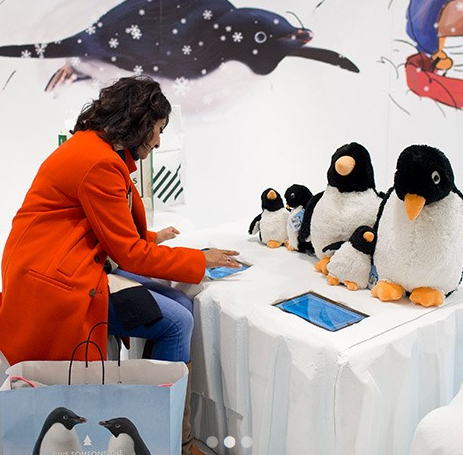 Now that is experiential marketing.

3. Burberry, “From London with Love”

This ad is about as British as you can get. Burberry’s “From London with Love” features Beefeaters, snowy London streets, and the angel child of David Beckham. Twelve-year-old Romeo Beckham—yes, that’s his real name—plays the world’s cutest matchmaker in this choreographed love story that unfolds on a lavish stage set:

Burberry experienced a 13 percent increase in sales when Romeo starred in a previous campaign for their spring/summer 2013 collection. It’ll be a huge surprise if a similar spike doesn’t happen this time around.

It’s a tradition for Tesco stores to add a Santa hat to their signs during the holidays. So when one customer from the town of Wigan, England, tweeted her disappointment that her store was passed over, Tesco took notice and went a step further than adding a hat:

They gave the town the lights display of a lifetime, complete with dancing snowmen and Santa jamming on a guitar. In fact, the whole show was created by the same team responsible for the opening ceremonies at the 2014 Winter Olympics. The crowd of 800 people who showed up for the event won’t be forgetting this stunt anytime soon.

Amidst all of these sentimental ads, one company had the balls to get in some quality bathroom humor, and people love it. “Even Santa Poops,” from “before-you-go” toilet spray maker Poo-Pourri, has been climbing the ranks on Ad Age‘s Viral Video Chart for weeks. It’s even showed up on the Huffington Post and Adweek.

As a comedy lover, I’ve got a special place in my heart for this innuendo-filled commercial. Whoever wrote “The whole house smells like a gingerbread manslaughter” and “You never should’ve pinched off a hot slice of fruit cake” deserves an award. Extra credit to the woman willing to sit on a farting Santa’s lap.