“Everything changed for me, and for us, and probably for everyone in this room when YouTube became a thing.”

Those are the words of Wilson Cleveland—the man who’s been called the godfather of the branded web series—speaking at the Contently Summit. Cleveland was referring to his own career as a writer, producer, and marketer, but really, he could have been referring to the world at large. In 2014, there’s no denying that online video has changed everything.

At the Summit, Cleveland wasn’t the only one dishing out nuggets of wisdom. He joined Chad Mumm, creative director at Vox Media, and Andrew Greenwood, vice president of global market engagement and demand generation at GenPact, to offer a range of perspectives about how brands can engage consumers and deliver business results through multimedia storytelling. Here are our key takeaways from a fascinating 40 minute conversation:

When British insurance company Hiscox approached Cleveland to help them attract small business owners—particularly tech startups—they probably didn’t expect that they’d end up winning a Streamy Award for Best Web Series. But that’s what happened when Wilson came up with “Leap Year,” a comedy about the the startup boom that beat Silicon Valley to the punch.

“There is no product placement; it’s really about telling a tangentially relevant story,” said Cleveland. Hiscox even wanted to remove the logos when filming took place at their office. For them, producing strong content was more important than beating the consumer over the head with product placement. Hiscox Head of U.S. Communications Hunter Hoffmann reported that “Leap Year” aided brand awareness and contributed to a “35 percent increase in product quotes viewed and products purchased online.”

Those results go against the assumptions of many product marketers, who worry that content won’t be effective if the product isn’t being pushed. In fact, the opposite seems to be true.

“Companies are worried that if we’re not in their face, people won’t know that this is made by us,” Wilson told The Content Strategist earlier this year. “But consumers know it’s you. They know it’s you. The know the brand that’s behind it. It’s when you keep reminding them that they’ll tune you out.”

2. If you have to use product, use it creatively

Remember when Head and Shoulders saved humanity in Evolution? “If you can make the product a part of the show—a character— that could work,” said Cleveland.

While making a series for Trident Layers, the client insisted on the gum playing a starring role. “They were very particular about featuring the gum, how you unwrap the gum, and how you could show it, and who was allowed to touch it. I mean, it was crazy.”

In response, Cleveland played on the brand’s meticulousness by producing a five-episode web show called “The Webventures of Justin and Alden.”

“We created a world that was so completely absurd, in that sort of absurdist comedy way, that it would make sense that the gum would be magic. “

How do you make football players excited to be part of branded content? Better yet, how can you make a dynamic video without risking potential injuries for your star players? The creative director at Vox Media, Chad Mumm, gave some insights on how they achieved just that in two weeks with their Nike-sponsored series “First & Long.”

With their connections through SB Nation—Vox Media’s sports website—they got six NFL players to agree to crash their high-school’s football practice. “Some of them actually aren’t even affiliated with Nike but they wanted to do it because we were going to make good content with them.”

As Mumm furthered explained, the players were excited to go back to their high schools. It was a new experience for them—one that was far more authentic than the marketing campaigns they were accustomed to. And that authenticity shines through. For example, we see Denver Broncos wide receiver Emmanuel Sanders goofing around with the players before dishing out heartfelt advice about how the keys to success. “I’m not just talking about on the football field; I’m talking about school and anything you want to be,” he tells the team after practice, making them chant “hard work and dedication” in unison.

Sometimes your client may not have the best reputation. Take BP, a company that still may be best known for its disastrous oil spills in the Gulf. It’s in cases like this where trusted names in publishing can come in handy. Publishers like Vox Media, which sports seven trusted websites, including Eater, The Verge, Racked, Curbed, and Polygon, can provide a neutralized platform where content will be less judged by the sponsor and more by the editorial quality.

In BP’s case, Mumm and Vox created a vertical called The Next Mile that contains stories about intriguing trends, products and people.

“We wanted to come up with a really friendly, safe environment for their brand,” explained Mumm. “Because they weren’t talking [about] corporate identity—it was really about a specific product.” 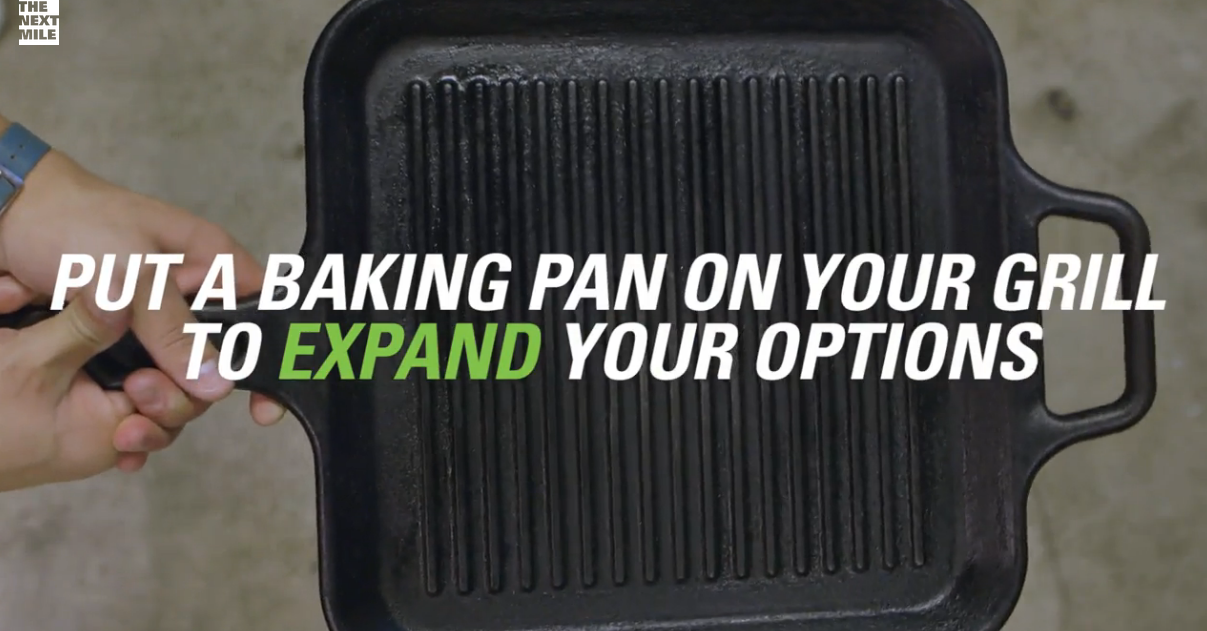 The campaign covers a wide range of topics and varies from long-form articles such as “A Teen’s Chef’s Rise to the Top” featured in Eater, infographics like “The Evolution of the Controller” featured in Polygon and videos with advice for overall life activities such as “How to Tailgate Better” that was in SB Nation.

“We weren’t trying to hit our audience over the head with any judgements by the company at all,” explained Mumm. “It was about, hey, here are some good advice for life-hackie stuff that is relevant weather you’re on Eater, SB Nation, or The Verge, and maybe it’ll get you interested.”

How do you stand out to some of the busiest people in business? Andrew Greenwood, vice president of global market engagement and demand generation at GenPact, uses videos to attract CFOs and COOs to the brand’s B2B content. This audience tends to be extremely skeptical and “overwhelmed with vendors that are trying to get their time,” Greenwood explained.

The videos are not narratives, but instead supplementary material to case studies and reports. Greenwood said that while their content it might not be story-based, it is in-depth, fact-based, and meaningful for their audience. “The senior executives that we’re dealing with really want to get into the meat [of the issue] and really want to know what are your capabilities and what have you done.”

Multimedia is becoming increasingly important to all demographics, and it is most successful when brands let creators be creative. As moderator Neil Chase put it: “The client is always right, but sometimes we are righter.”

For more on the session, check out the incredible graphic notes below by graphic designer Kelly Kingman: 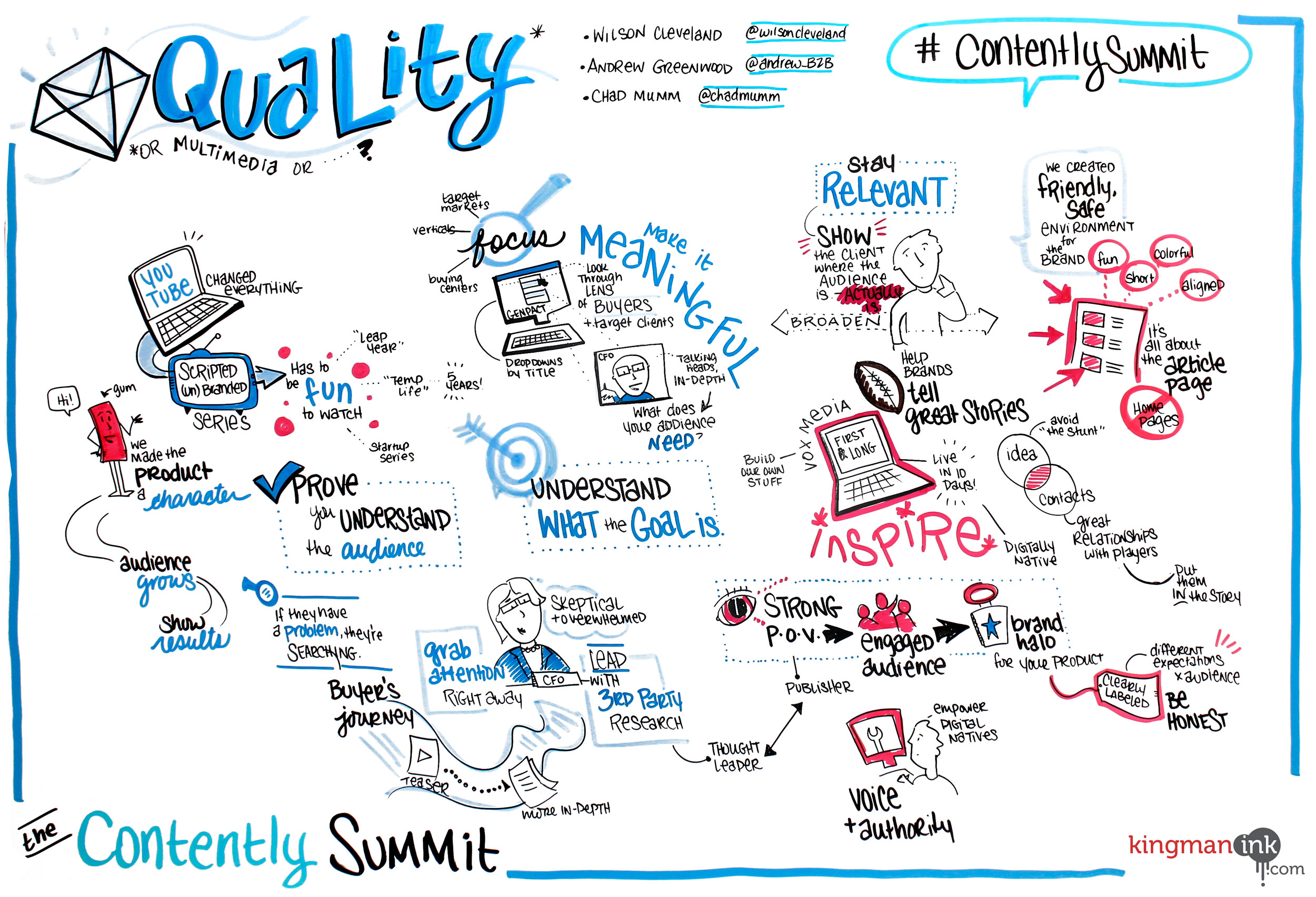