It looks simple enough: hero shots of smiling couples looking over paperwork, tips on how to secure a mortgage, coverage about how homeowners can deal with a changing climate. But you’re not looking a typical home ownership blog. This is The Home Story, and it’s sponsored by Fannie Mae.

To say that Fannie Mae’s reputation suffered after the 2008 housing bubble is an understatement. Since the bubble, annual corporate brand reputation studies by Prophet, Reputation Institute, and Harris Interactive have consistently shown Fannie Mae lagging behind major U.S. brands. In fact, in Prophet’s first brand reputation study in 2009, it came second-to-last on the list, trailed only by AIG.

That drop in reputation was historic. In Harris Interactive’s 25 years of studying brand health, Fannie Mae set the record for having the most dramatic drop in its brand equity score, dropping by 16.2 points in 2009.

But Fannie Mae has been attempting to turn their reputation around, with content as one central component. Their latest effort is The Home Story, a site populated with stories about the housing market. According to its “About” page:

“We created the publication because we believe that well-informed homeowners are an important part of sustainable lending. Simply stated, everyone benefits when people buy a home they can afford over the long term. We envision The Home Story as a destination for factual and informative content to help people make better housing decisions.”

But given how much Fannie Mae’s reputation has suffered, can The Home Story help move the needle? Or will it simply come across as disingenuous?

With only a little over a dozen articles in its archives, The Home Story is still in its early stages. Still, these are a serious effort towards following through on their promise of “factual and informative content.” More than half of the articles are over 1,500 words long, with most of them including interviews of real estate and finance professionals, as well as personable homeowners.

“Content can play a vital role, particularly when an organization feels that it won’t get a fair shake from the press, or when it needs to unveil a revitalized culture,” said Dorothy Crenshaw, founder and CEO of Crenshaw Communications, a public relations agency.

In The Home Story’s case, this revitalized culture involves attracting a more general audience, one that might not necessarily be in the market for a home right now. This becomes clearer when you compare The Home Story with Fannie Mae’s other content efforts, such as Housing Industry Forum and Fannie Mae Progress, which rely heavily on industry and corporate news. Even their consumer-facing content site, Know Your Options, is for those who are ready to buy; it’s filled with tools and calls to action designed to move the reader closer towards home ownership. 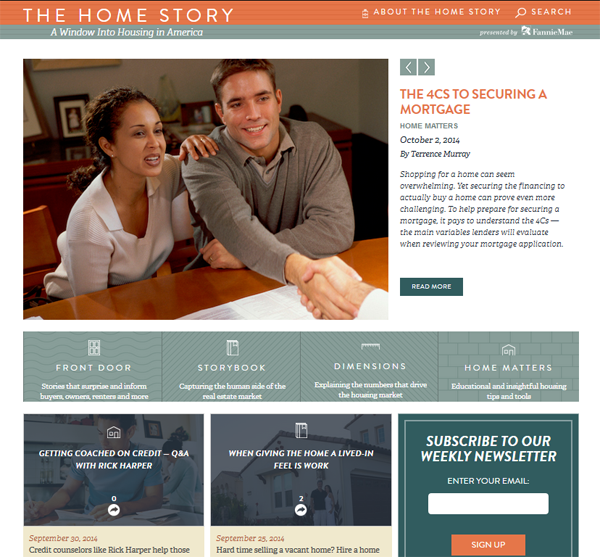 Conversely, The Home Story is more reminiscent of a typical blog than a corporate site. The slider contains large photos accompanying the featured articles, and social sharing buttons are more prominent. More importantly, the site stands out from Fannie Mae’s other content marketing efforts because of its emphasis on storytelling and its approachable language.

“High-quality content is very powerful, particularly when it comes to shedding light on a complicated and high-stress topic like mortgage financing,” Crenshaw said.

The key challenge is credibility

Despite The Home Story’s efforts at approachability, there’s still room for improvement that will help them build reader trust. While the site features many photos of people, the majority are stock photos, with only one article containing a photo of the actual subjects of the piece. Even the authors do not have photos or bios for the reader to identify with.

“The key challenge here is credibility, which is closely related to objectivity,” said Crenshaw. “The content must be credible as well as engaging. Some brands opt to ‘borrow’ credibility by aligning with third parties.”

As an example, Crenshaw referred to a native ad that Goldman Sachs placed in The New York Times (which we have also previously covered). She added that “Goldman clearly has the capital markets expertise, but the association with a top-tier journalism brand, particularly one that has been critical of its actions, elevates the campaign and boosts the influence of its content.”

The downside, however, is the price tag that comes with native advertising—paid posts with the Times reportedly carry a price tag of $25,000 to $200,000—as well as the fact that when brands publish content on their owned site, it gives readers a destination where they can return and continue to consume content over time.

Is Fannie Mae on the right track?

Despite the uphill challenges that Fannie Mae faces with The Home Story, the brand has a lot to look forward to. For two years in a row, Harris Interactive found that financial institutions in general are having reputation gains. For example, AIG and Goldman Sachs, which tend to make frequent appearances at the bottom five of the list with Fannie Mae, ranked a bit higher on the list this year.

“I think Fannie Mae is on the right track with The Home Story, and I like the ‘real people’ focus,” said Crenshaw. “Although I think it could benefit from additional objective data and resources.”

This vote of cautioned confidence shouldn’t breed complacency, however. Not having an ongoing strategy is the most common mistake brands make, according to Sorensen. “If you’re doing nothing, if you’re not trying to get word about your company on another website, you’re stuck with whatever happens,” he said.