Report: 80% of Publishers Want to Sell Ads Based on Time Spent

There has always been a cruel truth to Benjamin Franklin’s famous line, “Time is money.” And for publishers driving the future of content marketing, those three words are proving more appropriate than ever.

In fact, 80 percent of the top digital publishers are interested in using time-based metrics to price and sell ads, according to Digital Content Next‘s new report, “How Time-Based Measurement Is Grabbing Digital Publishers’ Attention.” This finding comes on the heels of recent announcements that the Financial Times and The Economist have begun selling ads based on the time an audience spends engaging with content with ads in view.

As a not-for-profit trade organization that represents the digital industry’s top publishers, Digital Content Next surveyed and interviewed a sample of their membership—including representatives from The New York Times, ESPN, Vox Media, Condé Nast, and more—about their plans to use time spent as a metric for selling ads.

The report states: “Until 2013, the most common way the industry measured time was to approximate the duration of a user visit using server logs; now it can be done in real-time, down to every pixel on the screen. “

So now that the big boys are doing it, isn’t it time we all start embracing this new technology to engage consumers and let advertisers in on the fun?

By valuing the time and attention a user spends with digital content, publishers can more accurately sell ads based on which pieces of content are drawing the most true engagement, not just the ones that drive the most clicks or have the best theoretical position on the page.

For example, the report cites instances where homepage stories are priced higher than articles that are placed lower down on the page, even though those articles with less prominent positioning might eventually receive more attention thanks to social traffic.

“Time-based metrics would effectively re-balance value attribution in such instances from advertising placement to advertising context,” the report states. “The result is that content most valued by consumers will bring in the most revenue, whether it appears on the landing page or hidden deep in the archives.”

In other words, the cream will rise to the top, and publishers will be incentivized to always produce content worthy of the consumer’s time.

The adjustment is also relevant for producing content across different platforms. “It’s important to deeply understand how users are spending their time on each device they are using,” David Coletti, ESPN’s VP of digital media research and analytics, told the DCN. “[T]his helps us architect our products better and make smarter editorial decisions for each particular device use case. It also helps us more accurately forecast ad impression potential by platform.”

Additionally, the report points to the Financial Times‘ finding that brand recall increases by 79 percent when an ad is seen for more than five seconds. That statistic shows just how much the calculus has changed: Time spent offers significantly more context than a click-through rate ever could.

How are publishers forging the path for time-based metrics?

For publishers, relying on time spent for media buys is now a matter of when, not if. The data from DCN’s report offers a clear picture of just how popular time spent is becoming. Eighty percent of publishers surveyed are interested in using time-based metrics to price and sell ads in the future. 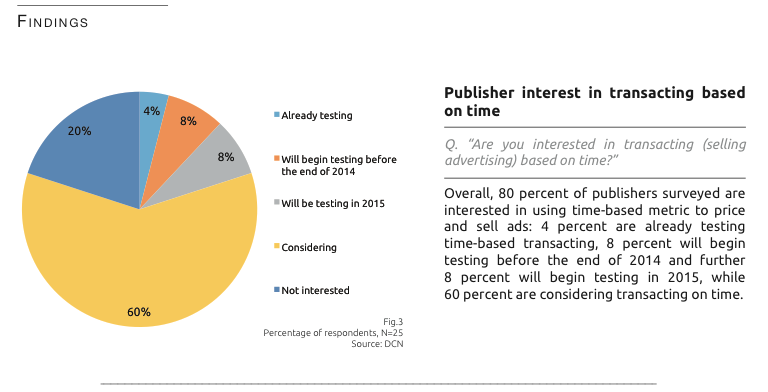 If we dive a little deeper to grasp why time spent has caught on so quickly, we see 80 percent of those using time-based metrics internally are doing so to enhance their offerings to consumers and/or advertisers. And by gaining a better understanding of how readers are engaging with content, publishers can better forecast how to offer advertisers placement.

How do advertisers feel about time-based metrics?

Even though publishers have made a strong push for time spent, they also admitted advertiser interest in the new metrics seems to be “lukewarm at best.”

Why might this be? According to the publishers, lack of standard metrics and measurement methodology tops their list on concerns (68 percent) about using time-in-view as a currency. Lack of research showing that time in view is correlated to ad effectiveness (48 percent) and lack of marketer and ad agency education on the topic (40 percent) are also important factors.

Change takes time, and skepticism is a natural reaction whenever big ad dollars are involved, but the tools are out there. Many publishers were able to easily track which platforms they were using to help measure time spent: 80 percent are using comScore, and 70 percent are using Adobe Omniture. 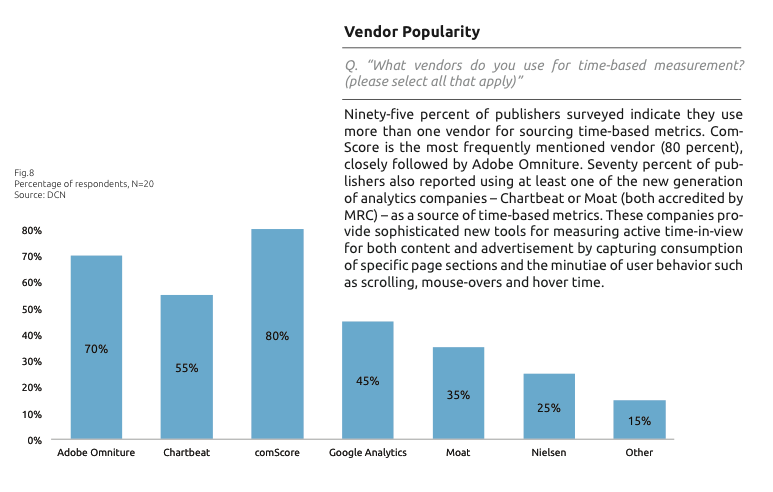 How can publishers integrate time spent into their measurement strategies?

While many agree that there’s no one metric to rule them all, time spent can certainly prove more informative than measurement’s previous dictator, the pageview. And even though many advertisers are still hesitant about time spent as a metric for buying and selling display advertising, the report suggested they’re significantly more receptive to the idea of using it for video content.

1. Make sure you can identify who your most engaged users are, how they find your site, and what drives their attention.

2. Report the total attention time to advertising partners, whether they ask for it or not. Get the conversation started and discuss the value of campaigns measured with time spent.

3. Set up management teams and tools that can best measure the value of the time your audience spends with your content.

Time spent is still regarded as the new metric on the block, and while some may have reservations about its usability, it seems to be the best option for publishers right now. As 4A’s EVP Mike Donahue stated, “Short of scalable, affordable neuro measures (of emotional response), time is the best surrogate to measure engagement.”