This Brand Blog Grew to 50 Million Monthly Readers in Just 10 Months. Here’s How

Alex Zhardanovsky knows that those who believe that cats rule the Internet are barking up the wrong tree.

“You might get 80 percent of cat people clicking on a cat video, but the sheer number of dog people will outweigh the cat people five to one,” says the co-founder of the online pet product retailer PetFlow.

Though a self-professed dog person, Zhardanovsky can back up his claim. He says that the PetFlow Blog is seeing between 2 and 4 million pageviews a day, and that number occasionally rises to 10 million.

The idea of a content marketing operation claiming to draw millions of pageviews a day may make you call B.S., but SiteWorthTraffic.com and SimilarWeb.com back up Zhardanovsky’s claims. They place PetFlow’s daily traffic at an estimated 1.7 million pageviews, with over 90 percent of that traffic coming from social. And a recent Alexa report identified an average of 50 million unique visitors to PetFlow.com each month. Zhardanovsky says that 98 percent of those visitors are coming to the Petflow blog.

In addition, PageData ranked the four-year-old company as the most talked-about retail and consumer brand on Facebook—more than PetSmart, Amazon, Nike, Target, and any other brand you love. It’s also the most trafficked online pet property in North America.

Even more impressive? The current iteration of the Petflow blog is just 10 months old.

A year ago, the PetFlow blog was a typical business blog, with posts about company activity and local animal rescue events. Their jump from unknown to big dog in the pet retail world was driven in no small part by the huge following they’d built on Facebook by posting pet photos and memes. But when Facebook changed their algorithm, allowing brands to get more distribution for posting links and less for text and photo updates, and added more robust paid audience targeting, it just made good sense for PetFlow to become a publisher.

“We were one of the early adopters of this new change,” Zhardanovsky says. “The nice thing for us is that the type of content we produce is the kind everybody loves to consume.”

Primarily, that means YouTube videos unearthed from the depths of the internet by his team of eight content curators, who then package the videos with backstories and irresistible headlines. And then their audience of 3 million Facebook followers bat each piece of content around the Internet like digital catnip. In other words, it’s the Upworthy model.

But PetFlow is like the data-obsessed Upworthy in more than one way. Following Upworthy’s lead, Petflow’s content curation is pure science.

That means crafting 90 to 100 stories a day directed at women over 45, who make up 70 percent of the PetFlow’s audience. You know, dog moms and cat ladies. The right photos, videos, and stories must be, in Zhardanovsky’s words, “something my mom would laugh or cry at.” Think headlines like “Rescue Pit Bull Protects 6-Year-Old Girl With Severe Autism. This Is Phenomenal,” “Adorable Owl Gets His First Bath And Blowdry! ADORABLE!!” and even “What This Little Boy Sings To Grandma Will Melt Your Heart!“ 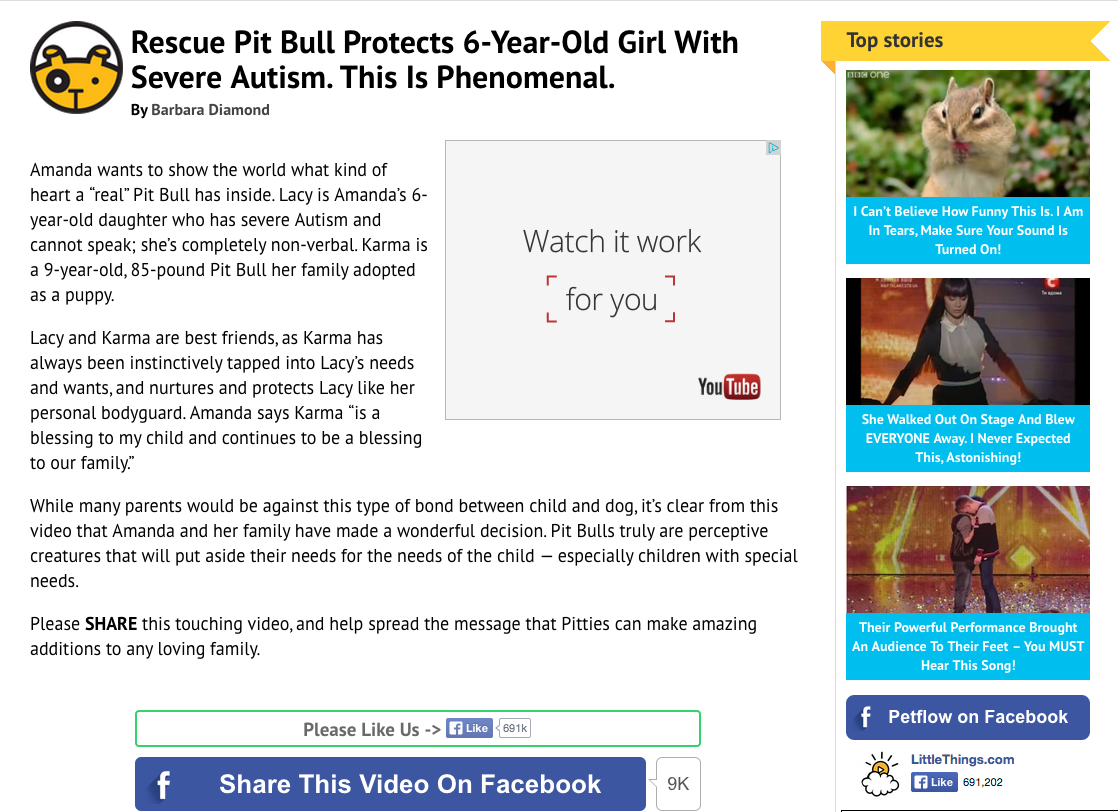 Of those 100 or so fully composed daily stories, only about 15 will make it to the blog. The curators gnaw the contender list down by testing each with unpublished paid posts on Facebook. Rather than simply posting a link to their audience, PetFlow pays to distribute them to a certain segment of Facebook users who aren’t fans. If a post meets a certain criteria—a classified combo of likes, clicks, shares, or comments—it graduates to the blog and is shared with the PetFlow Facebook pack.

“There are a lot of videos out there,” Zhardanovsky says. “Just because it’s a cute kitten doesn’t mean a lot of people are going to be clicking on it. We need to make sure that the content that we post is going to appeal to as wide an audience as possible.”

That may be a lot of steps to curate pet posts, but the effort makes the blog, in turn, work like a dog for PetFlow. Like any content site, both brand awareness and increasing product sales are underlying goals, and with millions of visitors each day, one would think that using the blog to advertise their own products would be a no-brainer. But Zhardanovsky found a much more valuable thing to do with that real estate: Sell it to someone else.

“Just because you’re watching a video about cat doesn’t means you’re in the market for cat food,” he says. “So if I can show you an ad from a third-party advertiser and then use those funds to find customers that are more likely to purchase pet food or run another email campaign, it’s a better use of that capital.”

That’s because the amount of revenue they make from advertisers is greater than what they’d spend to acquire the same amount of customers elsewhere.

Those are some pretty savvy marketing maneuvers, but if PetFlow is relying on buying customers and luring traffic from Facebook with Upworthy-like clickability, is the model sustainable?

They’re working on new tricks to make sure it is. Zhardanovsky plans to build more of a community around their content, rather than rely on social traffic, by creating membership profiles for visitors and giving readers a reason to visit the site directly and spend time there once they arrive. Zhardanovsky envisions, for example, parents using their site as a go-to destination with children on their laps for click after click of reliable entertainment. They’ve already started that process with the development of a very similar content site called LittleThings.com, which is intended to grow into such a community.

Will it work? PetFlow’s growth from zero to 50 million monthly visitors in just a few years suggests Zhardanovsky just might possess the digital wizardry to pull it off, one adorable pet video at a time.