How much do you know about paid social? Considering the practice is relatively new, chances are the answer is, “Not enough.” (If you’d like to learn even more after reading, check out our paid social distribution playbook and our take on why paying for social is better than “doing social.”)

Sprinklr, one of the leading social media management applications on the market, recently released a fantastic resource for brand managers and marketers to sink their teeth into.

It’s called “Everything You Need to Know About Paid Social,” and it lives up to its name. In just 25 pages, the white paper will help you understand why your organic social media growth has all but screeched to a halt, where paid social (such as display ads and promoted posts) needs to fit into your marketing mix, and how to determine which platforms and ad types to invest in.

It’s a meaty bit of content that should provide you with weeks of action items to work on. Here are three big takeaways that should help you improve your social media marketing game immediately:

1. You have to play the game

“Brands have an ultimatum: pay to play or forfeit the game.”

A few years ago, the idea of paying for ads on a social network seemed desperate to some, foolish to others. After all, one solid viral campaign could bring in tens of thousands of followers, and more followers meant more sales, right?

Well, the truth of that statement is still heavily debated because the analytics never matched up with the anecdotal evidence everyone batted around. But regardless of what worked a few years ago, the social media landscape has changed dramatically.

At this point, paid social is the only reliable means of building a targeted and effective audience for your brand on the major networks, not only because there’s just so darn much content out there, but also because the algorithms used by the big players have to favor paid over organic for practical reasons.

Take Facebook, for instance. They’re not only the biggest social network and driver of social referral traffic, but were also one of the first to introduce paid social media ads in 2004. Nowadays, brands simply have to pay to play on the network for practical reasons, explains Sprinklr’s white paper:

The average user is potentially exposed to 1,500 stories every time they log onto Facebook. Super social users are exposed to 15,000 stories. All of these stories compete against one another for users’ newsfeeds and attention spans. Rather than exposing users to every update, Facebook’s new algorithm filters newsfeeds using 100,000 different factors to decide which posts will get prime real estate on timelines and which ones will fade into the background. Consider it Darwinism in the social age.

That’s really an apt description. Survival of the fittest, in social terms, means not only those posts most deserving of engagement, but also those brands most willing to invest in encouraging that engagement. After all, keeping afloat a social network the size of Facebook, Twitter, or Instagram requires some serious resources. And the people running these businesses need to answer to shareholders.

2. It’s necessary, but not a necessary evil

Social advertising is an undervalued and underinvested area – social paid spend lags behind customer attention by 50%, or $5 billion. This means it’s a huge, untapped resource for marketers.

For many brands, paid social is a marketing frontier their competitors have not yet entered or fully utilized. It’s also a frontier that still has the attention of potential customers—making it prime real estate for grabbing attention and driving conversions.

Plus, in comparison to organic social media engagement, paid social offers advantages in exposure, targeting, analysis, scale, and eventual ROI that make it essentially a no-brainer.

To illustrate this point, the Sprinklr report highlights a case study involving Castrol Moto, the motorcycle division of the international Castrol brand. Over the period of a year, Castrol experimented with both organic and paid social campaigns on Facebook in an effort to boost engagement with their brand in North America.

During the first six months, they relied on organic reach and proved the quality of their content by achieving some impressive numbers: 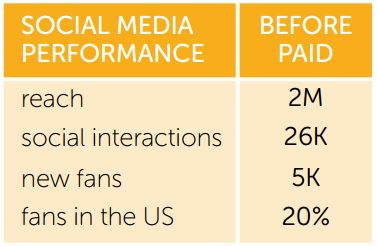 But there’s a problem, too. Remember, Castrol is focusing on North America. But Facebook is a global network, and organic reach can’t be controlled by region. So a full 80 percent of those 5,000 fans were of little or no value to Castrol Moto for the purposes of their social strategy.

For the next six months, they focused on a targeted paid social campaign while maintaining organic content distribution as well. Specifically, they created ads and promoted posts targeted by region, age, and interests. The results? 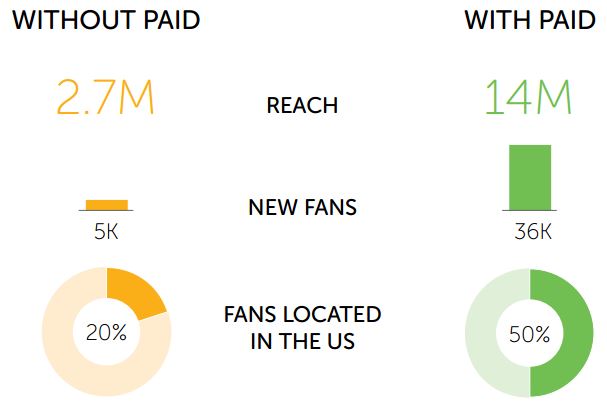 That’s a huge jump, not only in raw numbers, but also in the value of that audience demographic. As a result of adding targeted paid social to the mix, Castrol Moto was able to attract far more qualified fans, and they boosted engagement by a factor of 11.

Sure, Facebook, LinkedIn, and Twitter are huge and deserve your attention if you’re getting started with paid social. But they’re not the only players on the field, and they may not be the best option for your particular brand, or for every campaign.

Some of the up-and-coming networks sport impressive numbers as well and have even shown greater results from their addition of paid social options for marketers.

Instagram, for instance, is the fastest growing social network in the world with an incredible 23 percent increase in active users over the last six months. Instagram is also the network with the highest level of user engagement, by far.

Pinterest is another good example. Although their paid social options are fairly new, the purchasing power of their heavily female audience is impossible to ignore:

So, based on the product or service you’re marketing, and the content you’re using to do so, some of the smaller networks may be your best bet for paid social from an ROI perspective.

The Sprinklr white paper then reviews a list of Ten Commandments of Social Advertising, which focus, appropriately, on making wise choices, targeting effectively, creating great content, measuring the results of your campaigns, and constantly optimizing.

Basically, it’s what marketers have known for eons. But now it works for social too.

Organic and paid are converging and becoming dependent upon one another. You still need great organic content, otherwise, you shouldn’t be on social. But you need paid to make your organic efforts count.

So what are YOU going to do about it? Tell us @Contently on Twitter.