Art direction sparks trends, transforms fashion, and inspires our behavior as consumers and as members of society. One art director managed to convince the American public to start purchasing a German manufacturer’s cars after World War II, while another created a powerful message that produced one of the most internationally circulated phrases of all time.

Visual content is powerful. As Moz highlights, posts with videos attract three times more links than ones without, and video viewers spend twice as much time with brands. According to research from 3M, we process visuals 60,000 times faster than text, and forward-thinking publishers are adapting; BuzzFeed recently expanded heavily into videos and garnered nearly a billion pageviews as a result.

For brand publishers and marketers, there are several key lessons to be learned from how art directors conceptualize, create, and influence.

You don’t have to spell everything out for your readers. Helmut Krone, an art director at advertising agency Doyle Dane Bernbach, warns against underestimating readers’ intelligence and intuition. If you trust your readers to interpret your message, then they won’t feel patronized.

Krone was ahead of the curve with his iconic “Think Small” campaign for Volkswagen and “We Try Harder” campaign for Avis. He moved far left from the norm of cliché and hyperbolic adjectives. As he was retiring from the business, advertisers finally started catching on.

“They finally learned that if you trusted the reader to draw his own conclusions, he’d respect you. And possibly even trust you,” writes Helmut Krone collaborator Marty Cooke in AdAge.

Krone boldly splashed the word “Lemon” (slang for “a defective car”) as the headline under a photo of a Volkswagen. He knew that readers would see that and grow curious enough to read the smaller copy below. Where most advertisements at the time still used embellishing adjectives, Krone ran far left and reaped the rewards of his risk. Both “Lemon” and “Think Small” are among his most widely recognized work. 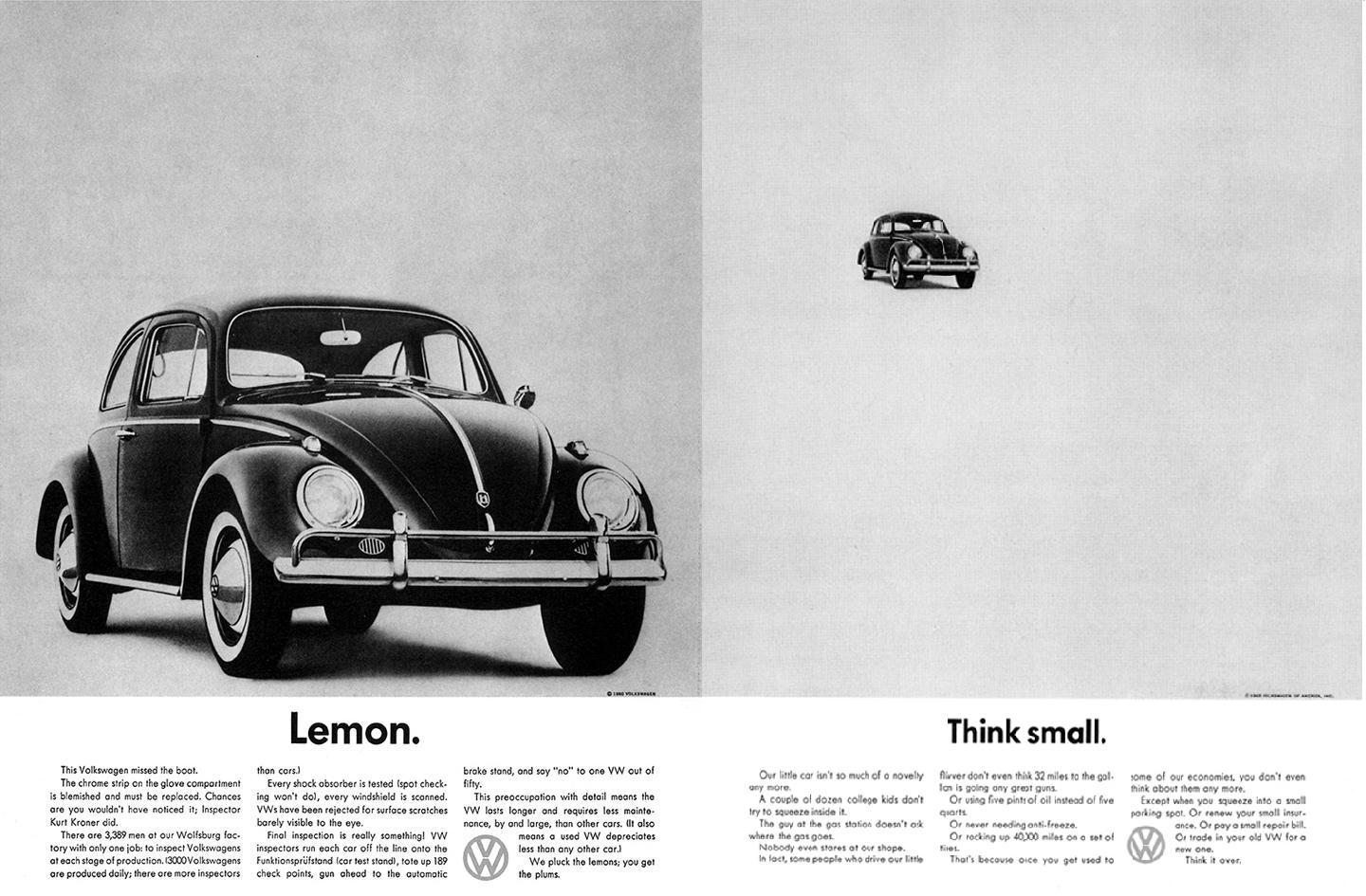 Before Jan Tschichold, designers of books and publications would put words to page in seemingly random ways. Tschichold started teaching illustration at age 14, began specifically studying typography at age 17, and later stumbled upon Bauhaus, an art school in Germany.

“As if it happened over night, his layouts began to have such rigorous structure and composition, filled with white space, straight lines and thick rules,” writes designer Alexander Ross Charchar.

After three years as the head of design at Penguin Books, Tschicold helped the company develop their style guide, introducing a new grid system and covering nuances like italics and footnotes. His designs continue to resonate with many of today’s graphic designers and have no doubt played a huge part in ensuring Penguin’s continued success and popularity.

Marketers will take care to remember that design plays a crucial role in audience persuasion. According to a study from Stanford’s Persuasive Technology Lab, 46.1 percent of respondents admit to relying on the design and look of the site to evaluate its credibility. Although your design style may be evident in the website template, your fonts and line heights can help reinforce your reputation and help readers remember your brand and message. Studies have shown, for example, that serif fonts in particular enhance information recall.

“I don’t know any author who does not want their book visually represented,” Kidd said in an interview with Teen Reads. “It’s a visual culture and you want your book to have a visual icon.”

Content creation isn’t only about great writing; it requires selecting corresponding images that attract readers to the piece. 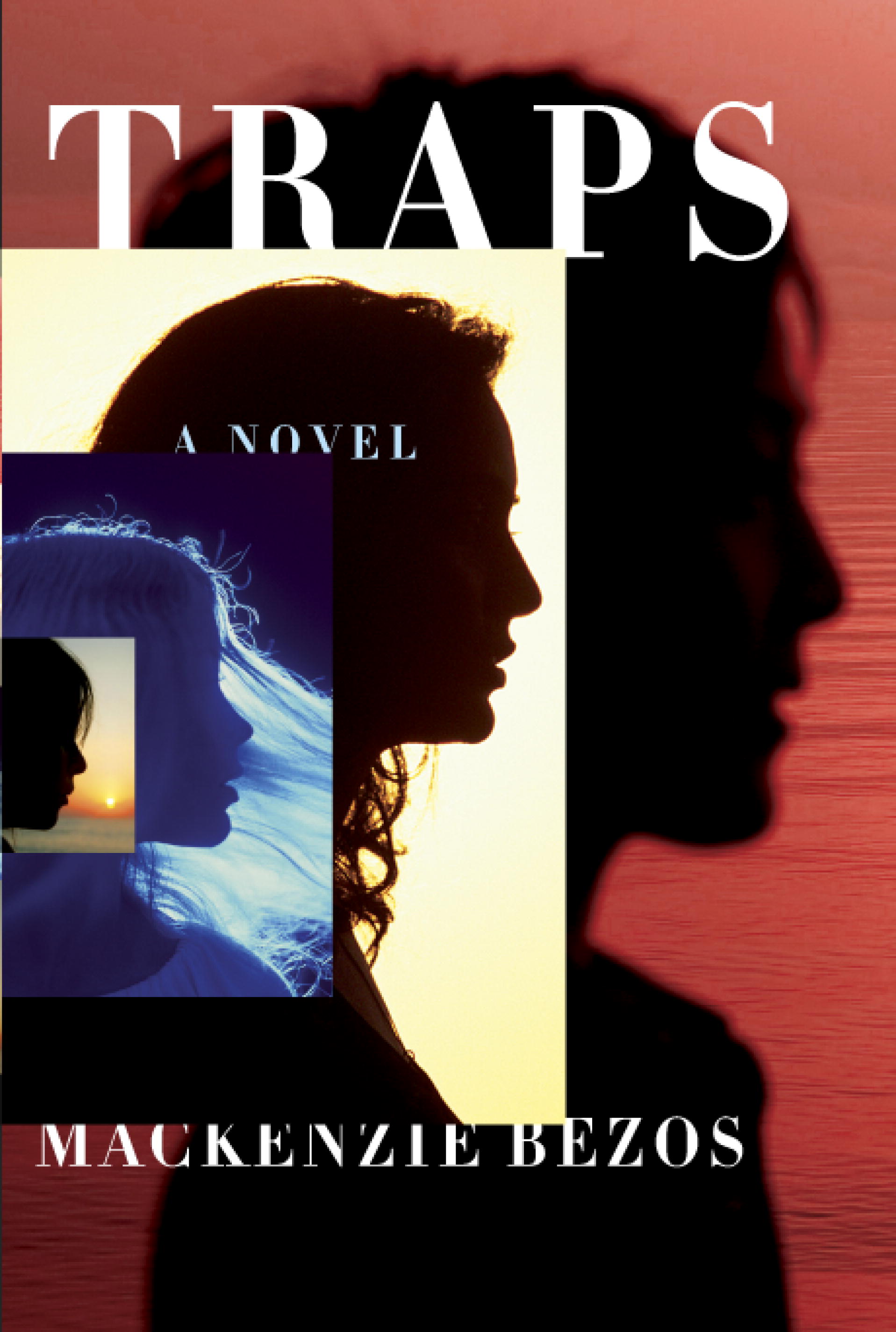 “The way I was taught was to not interpret it literally, like I showed in the TED Talk—you shouldn’t have a picture of an apple and write the word ‘apple’ underneath it,” Kidd added. “Especially with fiction, I try not to show a literal depiction of who’s in it—I want the readers to be able to build that in their heads.”

On the first day of my 12th grade Writer’s Craft course, my teacher wrote down three words that I’ve lived by as a writer and marketer ever since: “Show, don’t tell.”

Stephen Frankfurt, head of advertising agency Young & Rubicam, developed promotional slogans such as Lay’s “Betcha can’t eat just one” and Alien’s “In space, no one can hear you scream.”

Frankfurt is best known for showing potential customers the benefits of using his clients’ products.

“He used the sound of a beating heart for Excedrin ads and a strobe light-like effect for Band-Aids,” writes a New York Times columnist. “A commercial for Modess sanitary napkins began with what appeared to be an abstract painting whose elements came together to form an elegant woman in a long evening gown.”

These lessons can be applied easily to the B2B marketing world as well. If you’re creating case studies, share the details, results, benefits, situations, or other tangible outcomes of how your clients or customers have benefited from your services.

Patrick Li, an art director who has helped grow brands such as Nordstrom, Alexander Wang, and the Guggenheim Museum, believes in immersing yourself in the work of people that you admire and following their principles of success.

“I would say look at who the leaders are on the path that you want to follow and ask yourself what makes their work or character so successful,” Li said in an interview with Business of Fashion. “Try to learn, not literally from what their steps were, but from the more intangible qualities that makes that person, that client, or that job, so good. You have to develop an instinct for that and, then, I would say, follow that instinct!”

If you’re a content marketer or strategist, find editors, contributors, other brand publishers, or magazines that you admire and whose work you’d like to emulate. Immerse yourself in their products. You are what you eat.

In a 2013 interview with Mediabistro, Colin Jeffery, executive creative director at El Segundo, Calif.-based David&Goliath, said that brand publishers will need to create a content experience for readers or viewers that extend beyond a poorly shot video.

“Next year I believe we’ll see a resurgence of craft. Beautifully art directed executions, finely crafted copy, thought provoking, smart solutions,” said Jeffrey. “As experts, these are the things that can make our work unique and timeless. Somewhere over the last 15 years, craft got lost. We can blame compressed deadlines, auto kern, consumer behavior, and reduced budgets, but my feeling is we just got lazy.”

Jeffrey picks the soundtracks for his videos very carefully to create specific emotional experiences for the viewer. Brand publishers should use similar techniques to ensure that their design is enticing enough to exceed beyond those of an amateur.

7. Gerry Graf: It’s all about honesty and humor.

“With Ragú we did a piece of advertising on Facebook about how to feed your evil kid,” Graf wrote in an article for Facebook. “The traditional logic would be that you couldn’t say something like that—mothers love their kids, so there’s no way you could call their kids evil. But if you ask any parent they’ll tell you right away that, yeah, sometimes their kids are evil little monsters. And I guess it’s that aspect of reality that I’m working with a lot of the time.”

If you want to attract people to a product, speak your mind, don’t just talk about your product’s benefits. Express, and sympathize with, the pains and feelings that your audience experiences today in context with the problem you’re solving.