Point is: Bacon is not a hard sell. Still, Oscar Mayer continues to take bacon content marketing to new levels of crispiness with its Oscar Mayer Institute for the Advancement of Bacon (OMIFAB). The latest campaign? A coalition between the other, less-famous bacons: turkey and Michael—Kevin Bacon’s brother.

“Just as many novels and films often feature an unsung hero who long persists without recognition, we thought this campaign would finally bring light to the great qualities of turkey bacon, and felt like Michael Bacon also played that role in his own Bacon family,” explains Tom Bick, senior director of integrated marketing and advertising for Oscar Mayer.

Unsung Bacon’s mission is to rally consumers to follow Michael Bacon on Twitter (@MichaelBacon36), with the eventual goal of making him Twitter’s most-followed member of the Bacon family. He’s got a ways to go, since Kevin boasts over 439,000 followers to Michael’s 7,775. Under the guise of a serious sibling rivalry, the campaign actually aims to school customers on turkey bacon, which contains 50 percent less fat than pork bacon, as an alternative breakfast choice . That’s a lofty ambition for the lesser of cured meats, but that’s kind of the point of this bizarre campaign that goes whole hog in trying to entertain and educate fans. And the launch video’s bizarre, Wes Anderson-y tone makes it pretty hilarious.

The quirky launch video, created by 360i, has received a strong push on Facebook and Twitter, and Michael Bacon and Oscar Mayer continue to share updates as the campaign heats—or, shall we say, sizzles—up. 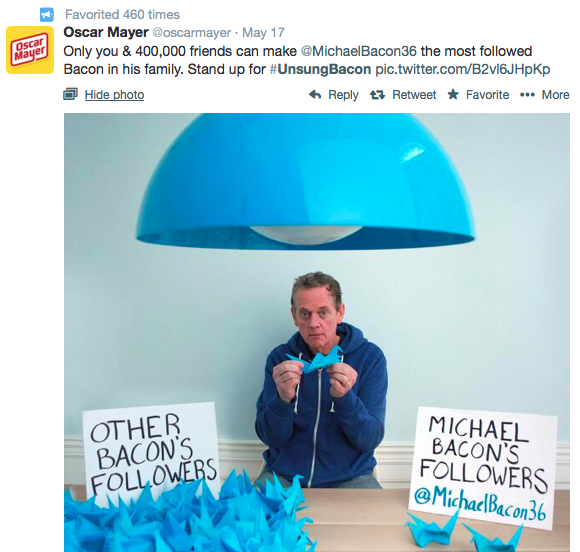 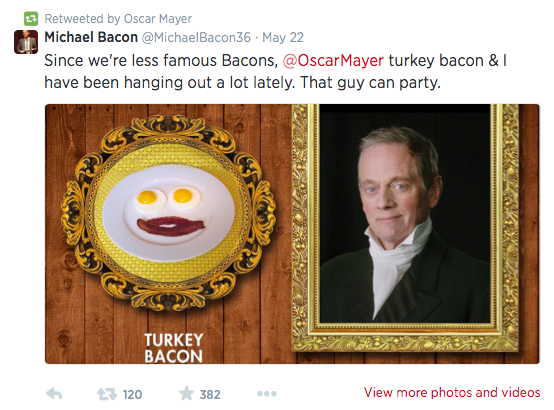 So far, Michael’s Twitter following has expanded by just over 80 percent—not exactly stats that would make a marketer go hog wild. Still, loyal fan feedback has been positive, and the campaign has garnered some media coverage. Here are some stats shared by Bick as of last week:

Bacon content is hardly new to Oscar Mayer. Previously, the company rolled out the Say it With Bacon special gifting program for Father’s Day 2013. Then came the Wake Up & Smell the Bacon mobile app that helped infatuated carnivores wake up to the sound and smell of their favorite pork treat. If there’s a corner for bacon content marketing, Oscar Mayer is running the show.

For more bacon bits, check out the behind-the-scenes video for Unsung Bacon.