Patch Is Back, But It’s Destined to Fail Again. Here’s Why.

“Patch Sites Turn Corner After Sales and Big Cuts,” declares a recent New York Times headline. Wait, you may be wondering, AOL’s big, failed hyperlocal experiment is back from the dead?

At first glance, it appears so, but first impressions can be deceiving.

It’s only been a few months since AOL sold majority ownership to Hale Global, and the Times reports that Patch has retained 85 percent of its traffic, with 17 million uniques in April, and is on track for $21 million in revenue this year—good enough to make the site profitable since February. But those successes come with some serious caveats, and I’m betting against them continuing. Here are five reasons why.

1. They gutted their editorial staff.

Any company can make a short-term profit by cutting a majority of their staff, but this comes at a very steep cost. Hale Global founder and owner Charles Hale told The New York Times that he simply “eliminated a great deal of corporate bureaucracy from the AOL model,” but 85 percent of your news staff usually doesn’t count as “corporate bureaucracy.”

(Update: Patch Editor-in-Chief Warren St. John says that Patch has hired 15 editors and a number of freelancers/contractors since the 85 percent cuts to Patch’s editorial staff—which were made at the time of the AOL handover to Hale Global—and continue to hire.)

That massive cut leaves a very big question: Who’s supposed to create the local content that Patch.com is based on?

The effects are already becoming clear. Some local sites have been shuttered. Others are limping along in the transition, with Patch keeping remnants of them alive by posting regional or national content in place of local news.

“It cost them nothing to keep those sites around, but where are those people that originally moved to places like Albuquerque and Bakersfield now?” asks Duy Linh Tu, professor and director of digital media at Columbia Graduate School of Journalism. “You’re never going to have the original mission of Patch: to cover local and do it really broadly and well.”

Which brings up another issue:

2. In many areas, Patch is no longer local.

As Patch worked to cut down the unsustainable, fast-scaling model that doomed Patch 1.0, they transitioned from one editor per area to a single editor covering two to three locations. And now, they’re pushing out regional and national content in various regions where they don’t have any reporters or editors present.

“They’re focused on a model of a super-editor position that would use digital streams and social streams and content tools to be able to source information and remotely monitor multiple sites,” says Dr. Michelle Ferrier, associate dean for Innovation, Research/Creative Activity, and Graduate Studies at Scripps College of Communication at Ohio University. Ferrier, who has been in talks with Hale Global since Patch’s transition from AOL, is closely tracking Patch’s moves in public wikis.

“It’s more like aggregation or curation, synthesizing what they found on a feed, adding a sentence or two and pushing it out,” Ferrier explains. This is so far from hyperlocal news generation or reporting that the content might not even look recognizable to former Patch readers.

(Update: Patch Editor-in-Chief Warren St. John stated that Patch will never switch to an all-aggregation model, and is hiring additional editors for local reporting at a steady clip.) 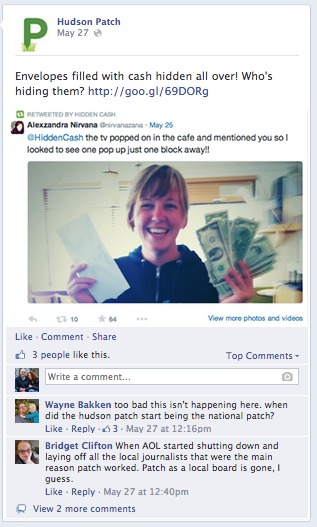 At first, Patch’s report that it attracted 17 million unique visitors and retained 85 percent of its former traffic appears impressive. But what do those numbers really mean? And are they merely the result of Patch’s established SEO ranking, social media following, and email list, all of which may well diminish over time?

“I’m always hesitant to believe the metrics that people give me,” says Tu. “You don’t have access to their logs. Eighty-five percent—how do they count that? Does every time a bot hits their site count as traffic? The days of valuing the click and traffic are kind of dead online—it’s a race to the bottom with CPMs being dimes and pennies.”

4. Some think they plan to build their site off the backs of unpaid students.

(Editor’s note: The above subhead has been modified in light of the update below.)

Ferrier, who was in conversation with Patch’s new editor-in-chief, Warren St. John, about how universities might be able to help Patch with local monitoring, decided against working with Patch for ethical reasons.

“They’re looking on trying to capitalize on the HuffPo model, and get local bloggers and free labor from our students in order to bolster their business bottom line,” she said. “When I told them what that would cost to hire the students to do this kind of work for them, they balked at the price, which is a drop in the bucket for what they’re making in that operation,” she explained.

Capitalizing on unpaid students and local bloggers is a problematic model, and many institutions—including Ohio University—do not promote unpaid internships to students.

(Update: According to St. John, it has never been Patch’s intention to recruit college students for unpaid internships. In fact, a joint grant that Patch applied for, along with Michelle Ferrier, for the Knight Foundation’s 2014 Challenge Fund for Innovation in Journalism Education included a stipend for students at Ohio University’s Scripps College of Communication. However, they did not receive the grant.)

5. Their brand has suffered irreparable harm.

The biggest stain on Patch’s reputation is that they manipulated journalists with promises of an idealistic mission before pulling a bait and switch. Patch’s original goal—other than saving journalism—was to open up sites in underserved and underrepresented communities. This was tweaked in favor of click-baiting tactics, a common and primary point of criticism from editors I spoke with off the record.

(Editor’s note: It’s worth acknowledging that this was a stain on Patch’s reputation from the site’s AOL days, not one that’s emerged under new ownership.)

“What we got initially was, ‘Rah Rah, we’re transforming journalism by going into the community and providing this great service,’ [which changed] to, ‘If you can put a cat or a dog or a pretty face and make a listicle, do whatever it takes to get clicks,’” says Ferrier. “They really bastardized their whole original vision and the very way they recruited their editors.”