The Chalice Symphony, and Other Beer Content to Consume Responsibly

If you’ve ever watched TV, you know beer commercials are ubiquitous. With so many brands and so many drinkers, it’s no surprise that our favorite brews are also starting to serve up a few pints of branded content creativity.

However, advertising alcoholic beverages always comes with a certain amount of risk. Brands have to hurdle obstacles like glorifying drunken, irresponsible behavior and underage drinking—or face the legal consequences.

A few companies have managed to create chug-worthy beer brand marketing that’ll get you buzzed (or buzzing) without stepping over the line.

So what do bros talk about over a beer? Whatever the answer, MillerCoors is trying to join in on the conversation. They recently partnered with AOL for a content portal called the Brew Pub Newsroom that will produce 350 pieces of original content, including 100 videos, by the end of the year. The ultimate goal is to target millennial males through content like “HuffBros Live,” a segment on HuffPost Live in which guys will shoot the breeze about chicks, sports, and gear.

Also on tap: Blue Moon Brewing Company, owned by MillerCoors, has partnered with Spotify to promote and produce the “Follow the Moon” tour. Content from five live events during full moons throughout spring and summer will be featured on a branded microsite with behind-the-scenes interviews and custom playlists. With 25 million users, many in the demographic that MillerCoors is trying to target, the Spotify deal is a promising one.

MillerCoors plans on increasing their digital video budget by 50 percent in 2014, as reported by AdAge. If their plan pays off, the next round is definitely on them.

A Brew and a view

When you picture a musical collaboration that involves an indie rock band and beer, you might imagine a bunch of people getting trashed at a concert, but Stella Artois has elevated the concept to something entirely different. The Belgian company’s video series, the “Chalice Symphony,” shows how a craftsman created four musical instruments out of Stella Artois Chalice glasses, so fans could “hear their beer.”

Debora Koyama, the global VP at Stella Artois, told Digiday, “Belgian beers are traditionally served in specific glasses designed to enhance the drinking experience. … We set out to create a campaign that explored the chalice beyond its expected functionality to find out what else it could be used for and what it could do.”

Since debuting in February, this original branded video has been viewed more than 1 million times.

Pouring on the real-time marketing

When he takes a sip of beer, he trends on Twitter. He is the most interesting man in the world. (Sorry, couldn’t resist.)

Dos Equis has made a name for itself with the “Most Interesting Man in the World” campaign, and the success has carried over to its various #StayThirsty social media campaigns.

Dos Equis has partnered with Rolling Stone for its latest venture, Dos de Mayo, a rethinking of the popular drinking holiday that will incorporate live branded events. Since Cinco de Mayo falls on a Monday, Dos Equis is encouraging fans to get the party started on Friday, the second day of the month. Rolling Stone’s official Dos de Mayo party in Los Angeles will feature top musical talent, and regional celebrations are scheduled as well via Thrillist.

In the meantime, look for the co-branded promotions popping up, like this infographic: 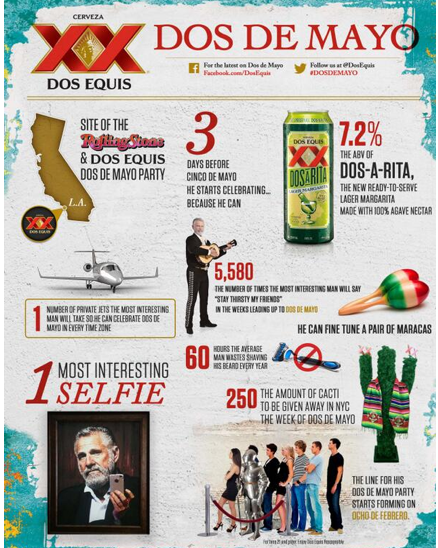 Pabst Blue Ribbon may be known for its refreshing lack of advertising (and cheap prices), but the brand still found a way to generate some impressive digital publicity.

A Relevance.com blogger explained, “Pabst engages in interactive empathy; effectively turning their Facebook page into a party at which only PBR is available to drink and everyone is having a great time. At no point do they attempt to woo the craft beer crowd, or apologize for their discount-brand stigma.”

Pabst’s loyal fan base not only includes hipsters and Blue Velvet aficionados, but apparently actor Bill Murray as well, who gave the brand some free marketing when a picture of him golfing in PBR pants turned into Twitter gold.

These foamy pieces of content are just three examples of how alcohol can be successfully branded with tie-ins to summer activities. With the weather getting warmer, and the noise from most beer commercials canceling each other out, be on the lookout for more unique examples of content marketing. Hooray beer!