How Can Olympic Brand Newsrooms Respond to Their Hashtag Crisis?

Olympic sponsorships are typically smooth skiing, but brands sponsoring the 2014 Games have found themselves facing unique challenges on the fly as human rights activists push back against their implicit support of Russia’s oppressive anti-gay laws.

So far during the Winter Games, the social channels of Olympic-affiliated brands have been flooded with boycott threats and accusations of blood money. McDonald’s, for example, found itself in a particularly volatile situation after activists hijacked the #CheersToSochi hashtag to highlight horrible cases of discrimination going on in Russia. 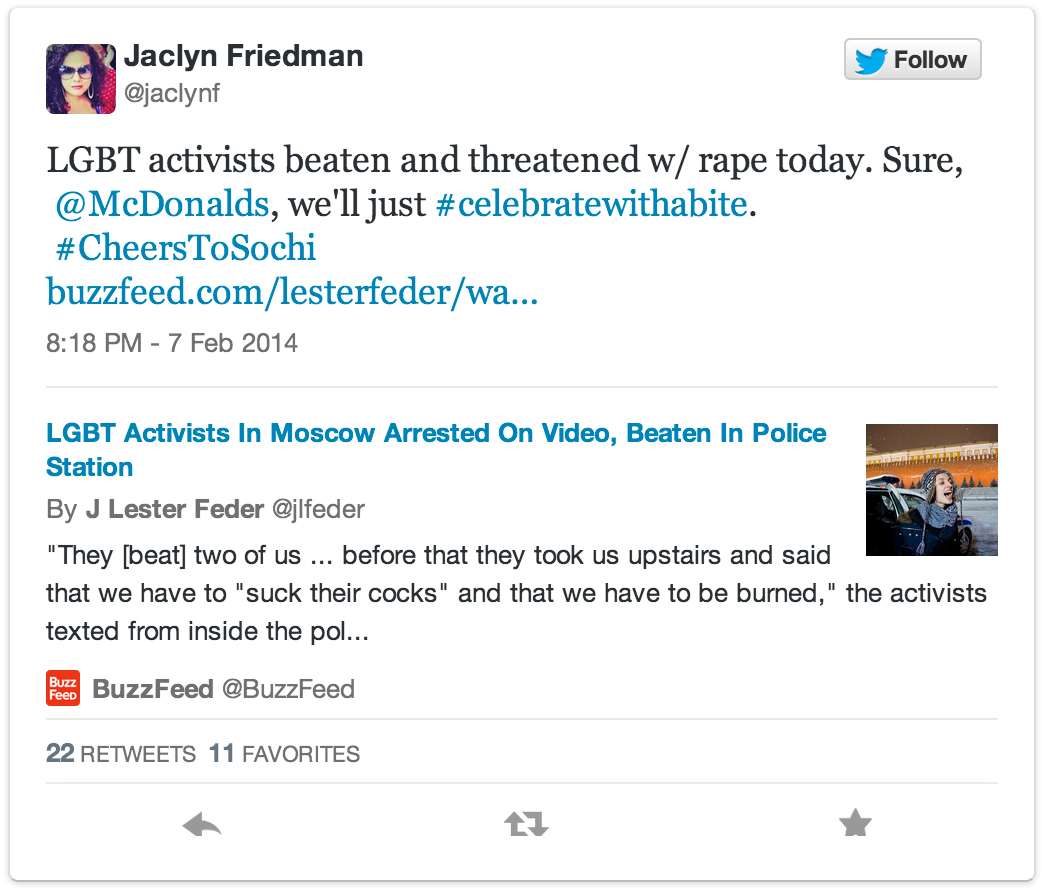 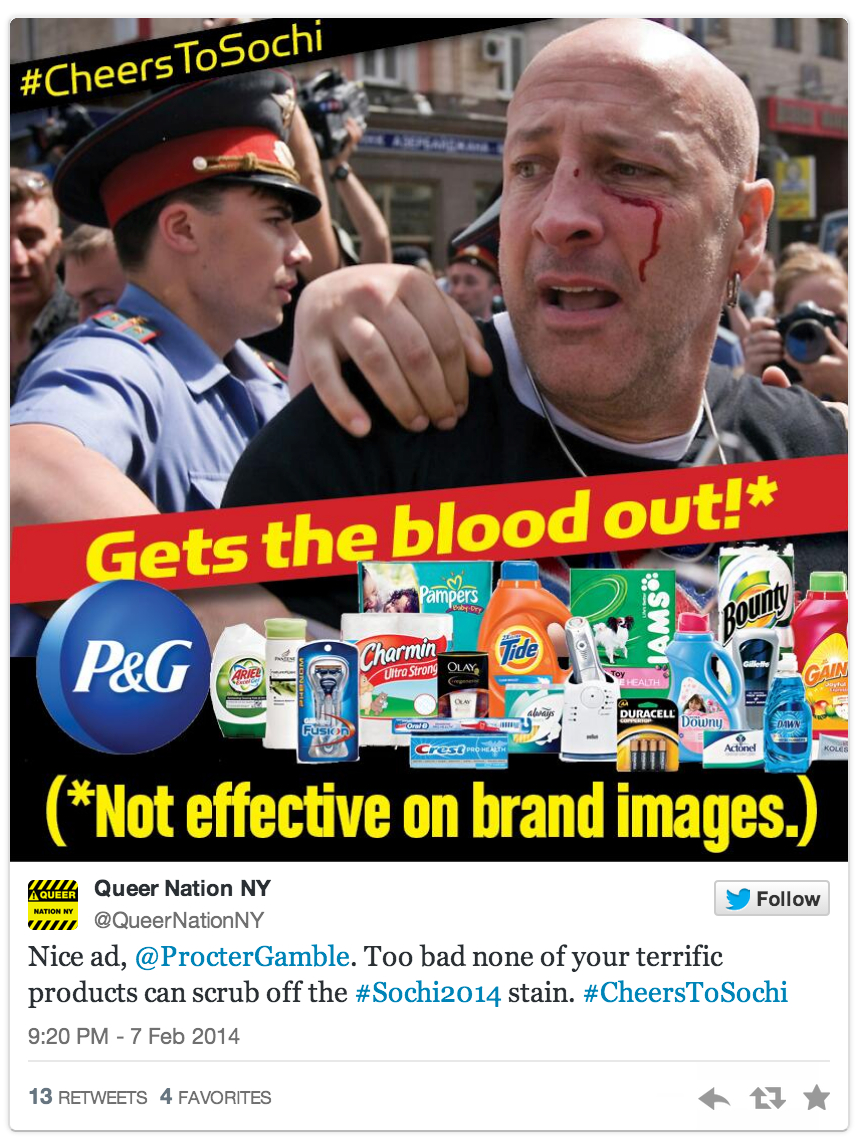 As the political stakes continue to escalate, brand newsrooms have been scrambling to respond. Let’s examine a few of the techniques deployed thus far:

On February 4, Team USA sponsor AT&T came out with a corporate blog post, declaring, “We stand against Russia’s anti-LGBT law.” No cutesy graphic or tagline, just a pointed criticism.

Some companies attempted to skate a fine line between condoning and condemning Russia’s policies. Of the major brands involved, Visa and Proctor & Gamble reacted the most cautiously, releasing blanket statements about inclusiveness and Olympic support, opting to stay out of the line of fire.

A P&G spokesperson told Digiday, “P&G’s commitment to diversity and inclusion is unwavering, and P&G strongly supports the International Olympic Committee’s statement on the right to participate in the Games regardless of race, gender or sexual orientation. We expect the IOC to ensure the Games are free of discrimination.”

Visa opted for a similar stance that supported Olympic inclusiveness but stopped short of reprimanding Russia: “As an Olympic sponsor… Visa believes the Games should be open to all, free of discrimination, and that applies to spectators, officials, media and of course, athletes. Visa is aware that groups and individuals are reaching out to Olympic sponsors to voice their concerns regarding human rights. As a company and as a brand, Visa stands for inclusivity and celebrates diversity. Visa does not condone discrimination of any kind in our policies and business practices.”

Coca-Cola and McDonald’s both responded with public campaign shifts. After the Share a Coke campaign banned the word “gay” from use on personalized soda cans, activists created cans reading, “Haters,” “Blood-Money,” “LetsAllBeGay” and “HelpLGBTInRu.” Coke apologized, releasing a statement that emphasized their stance on inclusiveness and a discrimination-free Games.

Soon after, Coca-Cola found itself facing another challenge when LGBT activists mashed up Coke’s iconic “Buy the World a Coke” ad from the 1970s with scenes of violence and oppression against LGBT protesters.

Instead of responding to the video directly, Coca-Cola simply reposted the original video on Facebook with the caption, “Cheers to the fact that a song can top the charts and be about love, equality and happiness. #AmericaIsBeautiful.”

McDonald’s made the largest course correction, completely abandoning their #CheerstoSochi hashtag after it was hijacked when LGBT activists turned it into a new campaign with a social channels and a website — cheerstosochi.org — that allows users to send protest memes to corporate sponsors. By the end of the games, fewer than 1% of tweets mentioning McDonald’s and Sochi were positive.

Like most other brands, McDonald’s released a statement that didn’t overtly criticize Russia. “We believe the Olympic Games should be open to all, free of discrimination, and that applies to spectators, officials, media and athletes.”

Undoubtedly, sensitive business interests are at play here for corporate sponsors, but most brands’ political correctness and hesitance to condemn Russia’s laws at a time when support for gay marriage is at a record high—especially amongst young people—certainly feels like a missed opportunity.

This seems especially true for McDonald’s. With millennial apathy as the brand’s biggest threat to date, the company could have used this opportunity to impress 80 million of their toughest critics. A cynic might say they’re not too inclined to care. The restaurant that serves 75 hamburgers per second worldwide has always flourished despite facing a long list of complaints about its unhealthy food and poor workplace conditions. Can they survive the growing #CheerstoSochi backlash?

Conversely, brands that made bold, supportive statements benefitted the most. AT&T, DeVry University, and Chobani spurred a podium-worthy amount of earned media , and AT&T’s #ItsOurTime hashtag has been largely left alone by activists. Considering how much people normally love to gripe at telecommunications companies online, that’s pretty impressive.

But did the brands that stood their ground leave it all out on the slope? These brands could have capitalized on the positive response to their direct stances with additional calls for support of LGBT equality in Russia. Chobani came the closest with one photo on Twitter of a rainbow-colored stack of yogurt cups and the tag line, “Naturally Powering Everyone.” With nearly 7,000 reactions, the tweet is a glimpse of what could have been if AT&T, DeVry University or Chobani had pushed the envelop with their Sochi content. 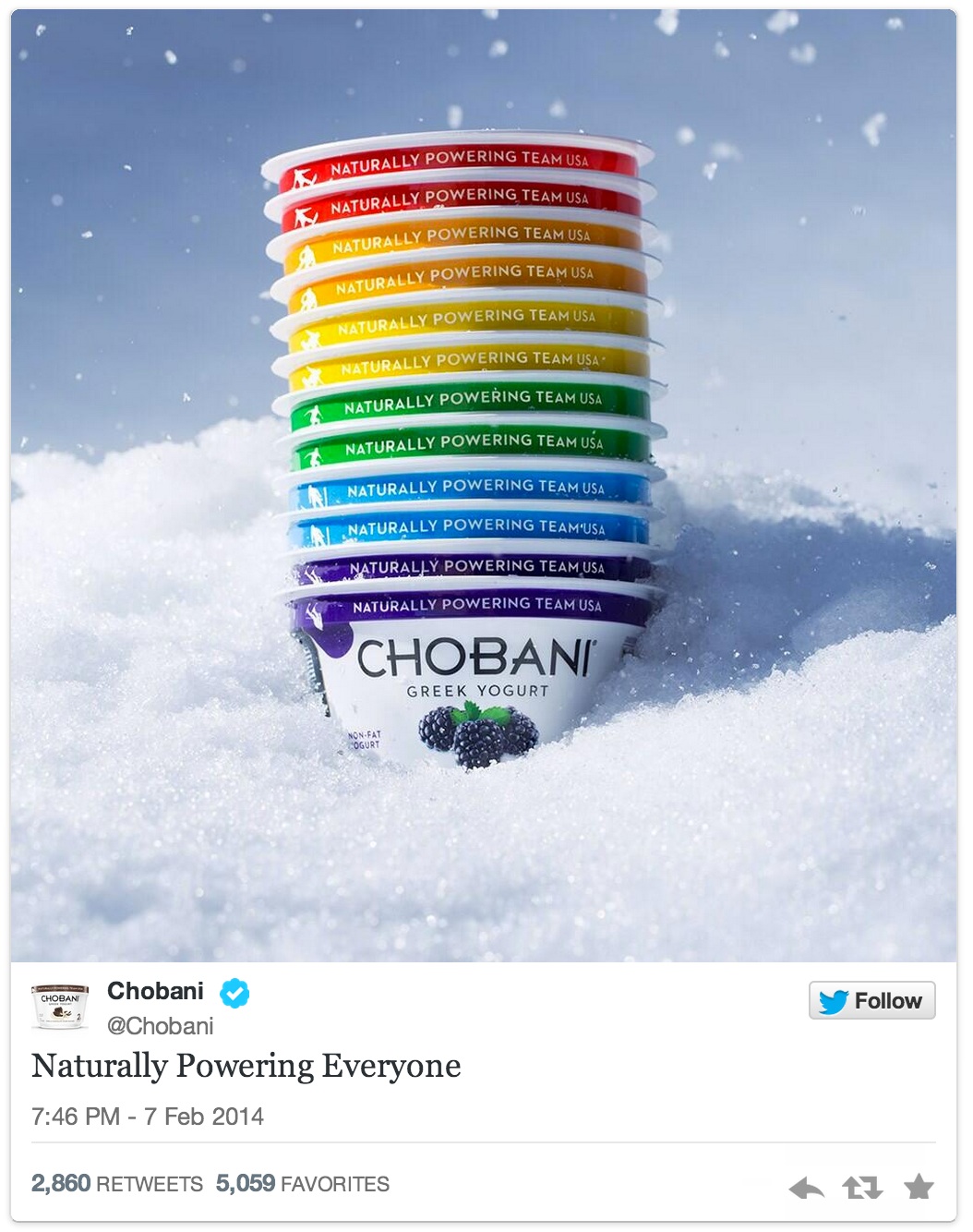 Olympic sponsorships don’t come cheap, however, and these companies had a lot to lose by taking a strong position against Russia. Like an Olympian unafraid to take big risks when it matters most, the boldest brands seemed to get the biggest bump from their responses to activists. It’s also why they’re walking away with gold medals in real-time content.