A few weeks ago I got an email from the future: 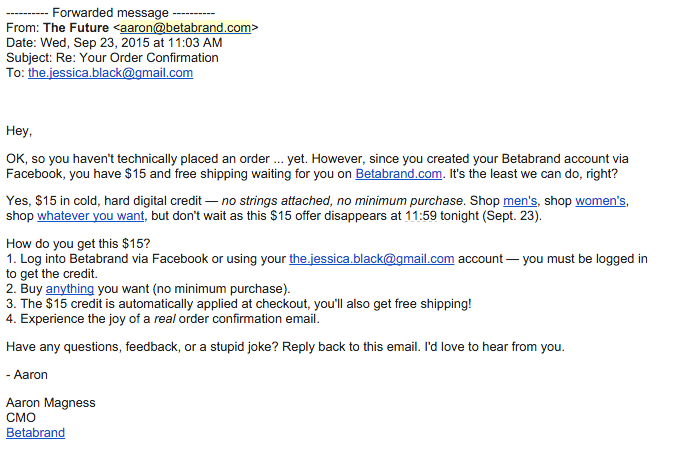 The future turned out to be Aaron Magness, CMO of Betabrand, the inventive clothing and crowdfunding company known for completely out-of-the-box marketing campaigns. Whether buying the centerfold of Cat Fancy magazine or getting 430,000 YouTube views on a video of someone slapping a dead fish against disco leggings—seriously—Betabrand has continuously pumped out unique campaigns that delight its audience.

Once I knew who the future was, I had to find out more about the people who were controlling it.

Magness magnanimously agreed to talk to me about his company’s content marketing strategy, with a specific focus on email tactics. We discussed Betabrand’s 30 percent open rates, how newsletters can be used to recruit new employees, and the symbiotic relationship between culture and creativity.

I’ve been a huge fan of Betabrand for a long time, and I’m an especially big fan of your emails. You guys told The New York Times, in 2010, that your newsletter had a 41 percent open rate—is that still true?

We’re still over 30 percent. Since 2010, the idea of the newsletter has changed quite a bit. And we’ve gotten smarter at sending them. We are able to send content that is more and more pertinent to the reader and maintain a higher open rate for our category.

Thirty percent is insane for e-commerce. I’m not in the e-commerce game, but from what I understand, that’s awesome.

While I have you on the phone, I’m checking our most recent campaign. A couple of our email open rates yesterday [were] 72 percent, 73.6 percent, 48.5 percent, 65 percent, and 35 percent. So we’re sending more, but we are smarter about who we send them to.

How are you segmenting those lists?

We release products nonstop—not quite one a day, but pretty close—so pretty much every Tuesday and Thursday we would release an email about everything that is new and that’s how we behaved for quite a while. Over the last year or so, we’ve been trying to get better about that.

For example, you should probably see the new women’s design first, whereas I should see the new men’s stuff. Then we look at past behaviors—what you’ve crowdfunded in the past, etc. We look at segment by gender then by recency and habit.

It seems like the email formats are fairly flexible. Sometimes there is a ton of text, sometimes there are images. How do you make those decisions?

As a company we’re big into testing. Pretty much everything you see externally has been tested quite extensively and is still probably being tested on certain levels on an ongoing basis.

What we are always looking at is champion/challenger mindset across everything we do. For example, some types of email are better as just plain text, whereas other announcements are better as image rich. Constant testing is how we evolve over time because we are constantly trying to figure out how we can engage people just a little bit better.

Is it effective to keep your audience guessing? I never really know what to expect from you guys. Is there any value to consistency?

Just as I expected.

Do you have any method when it comes to frequency?

It all goes back to testing and making sure you’re being true to your customer base. A lot of marketers worry, “Am I sending too many emails?” I think if you’re sending relevant emails the answer is no.

Victoria’s Secret, for example, I swear they send 105 emails a day per person, but you never come across a spammy email. I like that audience as an example because no one thinks of Victoria’s Secret as a discounter, yet every email they send has some sales offer in it.

I don’t get Victoria Secret’s emails, but I’m definitely going to now.

As a marketer, we’re all signed up for about a billion emails.

I also feel like partial nudity is helpful. I’m trying to work more of that into our emails, but it’s surprisingly hard when you’re trying to sell content marketing software.

What is your most popular email of all time?

Last year, we were hiring a head of UX. Instead of going out and getting a recruiter, which would have been a normal thing to do, we totally disrupted our homepage to make it look like crap and sent out an email saying, “HEY WE NEED UX SUPPORT.” We got a huge response. We used our own newsletter and our own database to bring in amazing qualified candidates. The share rate of that email was great as well because people were like, “Check out what Betabrand did.”

Yes, most of our emails are, “Hey, we’ve got a great new product you should check out,” but not every email has to be so focused on selling. A lot of it is about keeping people engaged, and we have started—and will continue—to send more content that just keeps people engaged so we’re not always asking them to come buy one more pair of pants. That goes a long way.

I was really hoping it would be the one with the fish slapping the girl with the disco pants’ butt—you know what I’m talking about?

That might be my favorite thing on the Internet; it’s amazing. I was just looking at it. That’s why I was late to this call—I was watching that video like six times. So what emails tools do you guys use?

Our email service provider is Sailthru. We onboarded them in June. We use Optimizely to test on-site experience and make sure we’re not too mainstream or too edgy or too original or too techy, that’s where it starts to fall off.

How do you avoid the trap of looking around and seeing what everyone else is doing and becoming boring?

We are selling very unique products, so we don’t have a lot of direct competition to look at. The reality is that if everyone wanted to optimize transactions, everyone would look like Amazon and Zappos. They are the best at what they do for a reason. So for people who sell more unique products, the first step is to see what are your points of differentiation and what are the things that will keep your audience engaged, and I think that is the primary thing to focus on.

So I have The Bathroom Reader Volume 1 sitting on my desk right now.

I’m glad it’s on your desk.

I keep it there to impress people with my highbrow literary taste. Who writes that content?

I believe that was Anthony Jaffe [director of marketing] and Chris Lindland [CEO]. They are storytellers in everything they do, and I think that really comes across in the brand. With our emails it’s more than just “Go buy this great shirt.” They take the essence to tell a great story, and that goes a long way.

I think what you just said is what we in the biz call the money shot. It’s all about telling a great story. Any chance you will keep making bathroom readers?

We’ve talked about other physical pieces of content that we could create, so it’s always a possibility. It really comes down to time, energy, and resources. We always want to create things that will keep people engaged, whether that be a nifty video, a funny response on Facebook, a newsletter that someone wants to click through.

We don’t want to be like, “Oh shit, another quarter, let’s come up with another bathroom reader,” as opposed to the freedom to just keep creating cool content. People consume content in different ways, we just want to make sure that we’re picking out the ways that truly engage them.

Are there any other examples of your content that you are really proud of?

We did a contest where the winner got a billboard in their hometown. If you’re from smalltown Iowa and you get a billboard with your picture in it in your hometown, that’s pretty funny.

We did something where the winner received the centerfold of Cat Fancy magazine. It was an interesting negotiation because, as you can imagine, Cat Fancy did not sell a centerfold. And to make it even better, the [winning entry] was a picture of a guy sitting there holding his dog.

We weren’t putting an ad in Cat Fancy magazine in order to get customers from Cat Fancy magazine. We have this really amazing community, and we’re constantly trying to think of ways that we could celebrate them that are outside of what normal people think about. Giving someone an opportunity to be a centerfold is incredible. Giving someone an opportunity to be on a billboard is incredible.

There is a lot that we try to do that goes outside of the traditional ad buy, to hopefully give back to our community and make someone smile in the process.

How do you foster that creative environment?

One thing I’ve heard is: Hire culture, and let the rest of it play out. I think that really works here. it’s a creative company that attracts creative people. If you want to sit in a corner office in a shirt and tie, it’s not going to be that kind of fit and that will be pretty obvious right away. Creative thinking comes from creative people, and that helps keep the culture really strong.