The Uncanny Valley of Content, or Why Fox News Should Stop Pretending to Be a News Network

In robotics and animation, a phenomenon occurs when characters start to look too real.

The human brain is comfortable dealing with things it’s certain are either definitely real or definitely fake. However, a rendering that looks just close enough to reality—but not quite—suddenly becomes creepy. R2D2 is cute when he chatters and beeps. We can see ourselves befriending C3PO. But a lifelike ventriloquist doll can give us the willies.

That creepy gap between almost real and real is called the “uncanny valley”: 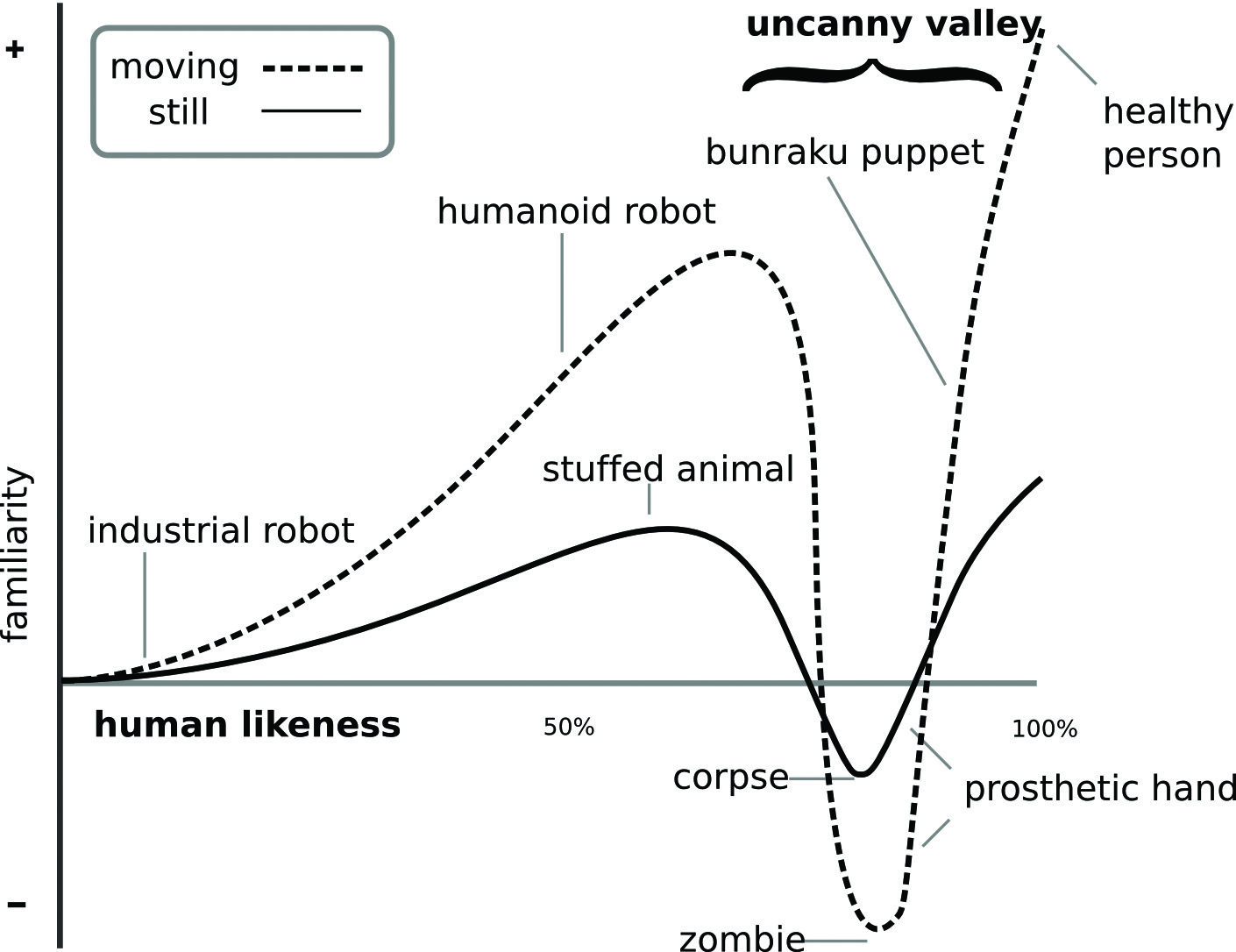 A similar thing is occurring in today’s media. To explain, I’m going to talk about my friend’s angry father.

Every night he squeezes into his La-Z-Boy after work and turns on “the news.” The news, in his case, is The Sean Hannity Show on Fox. Sufficiently riled up, he shuts off the news and proceeds to harangue anyone within arguing distance.

My friend’s father’s problem is not (necessarily) his politics. The problem is what he thinks is news is actually not. He’s watching emotionally charged commentary, and he’s angry because the main lens through which he views world affairs is skewed by outrage.

And that’s Hannity’s thing. An opinionated political junkie, he is on record saying: “I was born to argue.” He’s upfront about being a talk-show host, not a journalist. But his show looks and feels suspiciously news-like.

It fits in what I call the “uncanny valley of content.” It looks like news, but it’s not.

Although Fox News draws in a large number of people—like my friend’s dad—who don’t recognize the difference, the pseudo-realness and its effect on undiscerning viewers disgusts a lot of people. Thus, Fox News—which calls itself “balanced” while acting quite the opposite—and The Sean Hannity Show in particular, have negative brand perception.

News organizations have brought this problem on themselves. Today, most of the “news” on cable is not actually news, according to Pew Research data: 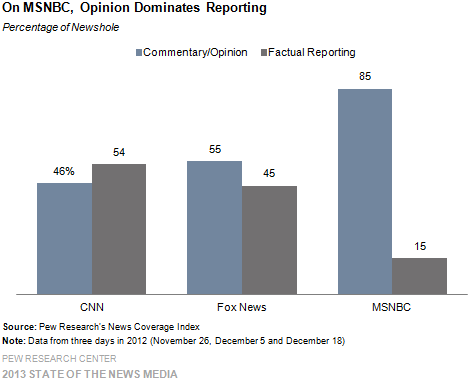 As a former newspaper editor (opinion editor, in fact!), I’ve experienced firsthand what the media business has always known: After the front page, the opinion section is often the most-read part of the paper. More people tune into Bill O’Reilly and Rachel Maddow than regular headline news. So it makes financial sense for Fox and MSNBC to up their respective opinion games.

Unfortunately, this stuff falls into the uncanny valley of news because it’s aired on channels or shows with the word “news” in the title. They’re close to the real thing, but not quite. This is a huge problem, especially in television, where the medium doesn’t really distinguish at all between facts and opinion. The dynamic dominates digital media as well, where bloggy opinions and factual news feel almost hopelessly blurred, often leaving people with weird flavors in their mouths, wondering what’s spin and what’s not.

This lack of transparency and labelling is instructive for another growing group in the media scene: content marketers.

As more commercial brands start publishing blogs and magazines and sponsored content and other forms of branded storytelling, we’re going to see more conflation of brand content and news content. Brand publishers need to beware of the uncanny valley where audiences might mistake their stories as capital-J Journalism instead of what it is: information, education, and entertainment created to build a relationship and eventually sell you something. There’s a huge place for this content out there (and it’s much nicer than interruptive advertising), but doing it the wrong way—masquerading as unbiased news when you’re not—will have adverse effects on brand reputations. 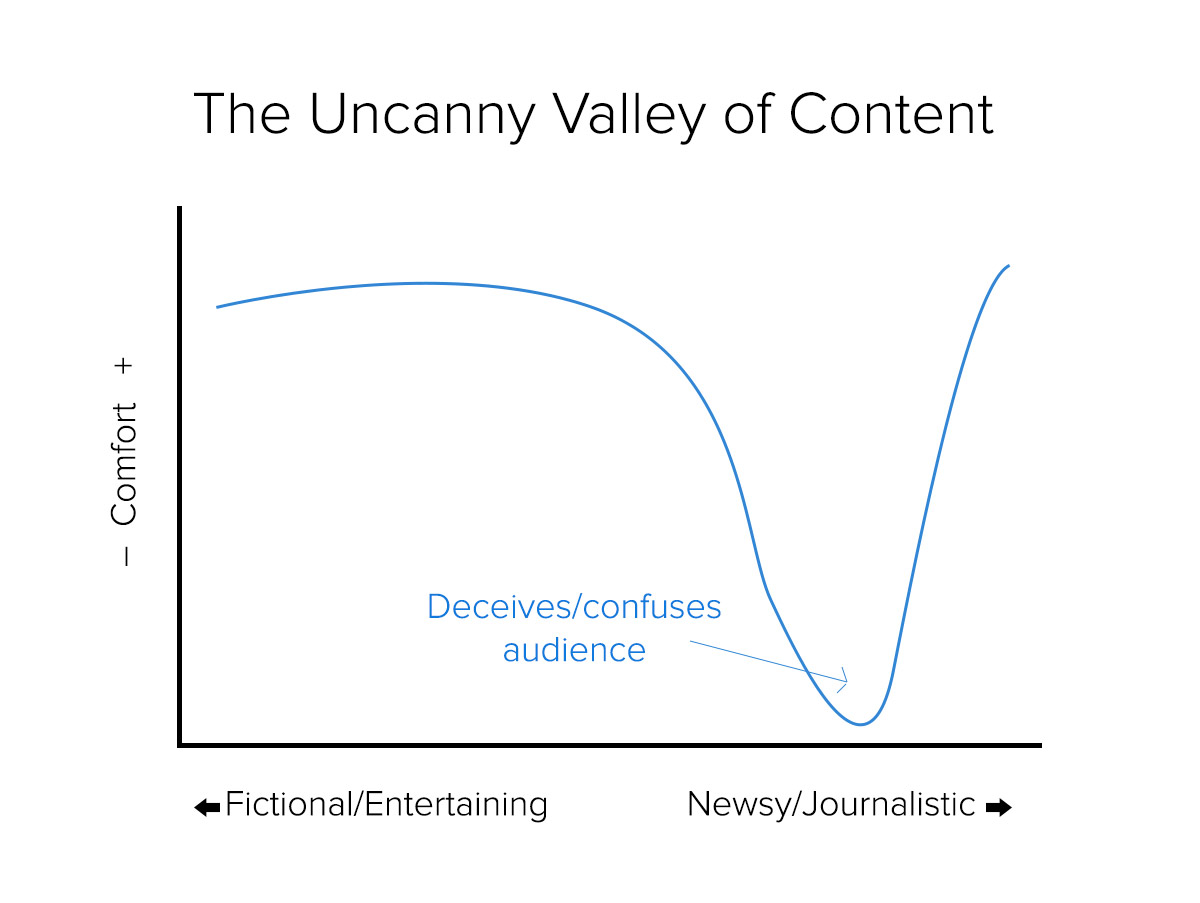 The good news is brands have a positive incentive to stay out of the uncanny valley. They gain much by proudly presenting their content in a way that makes the source and intention undeniable. If Tesla (a brand I personally care about) creates an educational video on the future of energy, or publishes a series on awesome race tracks, it behooves the company to put its logo on the content and explain why it cares about the topics. Otherwise, I won’t give the brand credit for the good work, which will prevent us from forming a relationship. Conversely, if Tesla writes pseudo-news articles that promote its technology without disclosing the authorship, when that information inevitably comes to light (thank you, social media vigilantes), the brand will suffer big time.

The best bet for brand publishers: Unless you’re able to maintain true objectivity, stay away from hard news and stick to commentary, education, and entertainment. (Especially entertainment. It’s the R2D2 of our valley metaphor!) And for godsake, put your brand name on your content. No one gets a raise for getting their company compared to a ventriloquist doll.