Contently By the Bay

This post was written by Elisa Cool, VP of Sales at Contently.

Shhhhhh: You’ve Been Invited to an Especially Excellent Mystery Outing.

With those words, Contently began a new tradition. Our first San Francisco client entertaining experience, we decided, would be nothing if not fresh, authentic and fun. All it took was a glance around our office, featuring book wallpaper, portraits of famous writers, shelves overwhelmed with books—”Aha!” we thought. “Contently’s Inaugural Mystery Tour of Lit & Sips: An Evening of Celebrating Storytellers Past & Present it is!”

The exclusive guest list included storytellers (marketers) from San Francisco’s Super Bowl host committee, Airbnb, Lyft, Blackrock, Hotel Tonight, Evernote, and other hip San Francisco brands. In an email invitation, they received clues directing them to the first location. And yes, we took the opportunity to use words like “balderdash!” and “merriment!” in the invitation because when else were we going to use those words?

Guests were guided on the tour of downtown San Francisco via a Twitter feed with clues to the former haunts of Ginsberg, Kerouac, and Twain, among others. Here’s clue #1: 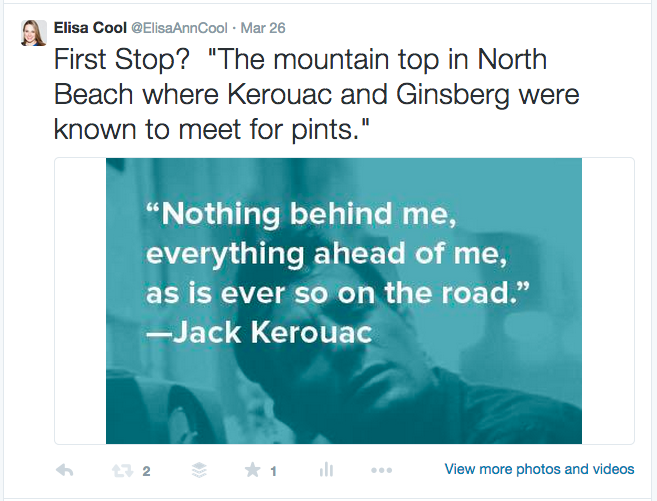 Full disclosure: The clues weren’t particularly hard to solve, and a quick iPhone Google search revealed that “The Mountain Top Where Kerouac & Ginsberg Were Known to Stop for Pints” is also known as Vesuvius, at the corner of San Francisco’s Broadway and Columbus. Directly across the street from the infamous City Lights Bookstore, it is no surprise that Vesuvius is home to storytellers and stories in abundance.

According to Vesuvius’s website, it attracts “a diverse clientele of artists, chess players, cab drivers, seamen and business people, European travelers, off-duty exotic dancers and bon vivants of all walks of life.” It’s best known for being the location Jack Kerouac stopped over at for a drink prior to his trip to meet Henry Miller in Big Sur, but it turns out that he either enjoyed his drink or dreaded the drive so much that he never made the trip.

The next clue brought our adventurers to 256 Columbus (formerly Jazz at Pearls). 256 is an old address with a nostalgic new tenant, Devil’s Acre, and a theme hearkening back to the Gold Rush Era—the cocktail lounge is dressed as an apothecary serving up an array of well-mixed adult beverages under the guise of elixirs. Devil’s Acre borrows its name from the Barbary Coast days, when North Beach was a particularly crime-ridden strip which makes the (ahem) “pharmacy” theme all the more apropos. 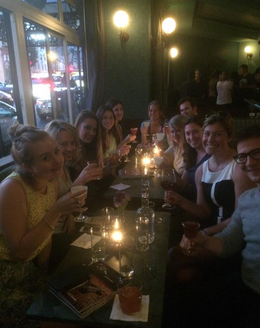 The final clue of the Lit and Sips Tour landed the party at Specs’ Twelve Adler Museum Cafe. Specs’s is hidden on Adler Lane and is 50 percent dive bar, 50 percent collection of oddities and curiosities, and 100 percent original. It has a reputation for being the hangout of writers, bohemians, radicals, and others falling loosely into San Francisco’s broad demi-monde association. Rumor has it Specs’ almost shuttered its doors just one year after opening as its original proprietor (and his four closest bartender friends) nearly drowned in the Bay when their 32-foot sloop sank just 3 miles off of Golden Gate Park. Lucky for them, and for us, the U.S. Coast Guard arrived in time and Richard Simmons’ (aka Specs’) namesake bar/café still stands.

Thus concluded our evening of literature and libations through San Francisco’s North Beach. Both drinks and stories were shared and we can’t wait for the next town and the next set of clues.

Contently Looks Back at 2018: Campaigns, Workshops, and Content Mastery