Many guys, myself included, hate shopping for clothes. At malls, there are too many brands at too many scattered stores. Too many moments spent wishing for the sweet release of a gooey Mrs. Fields cookie. Shopping online has its own unique inconvenience: How am I supposed to know if one brand’s extra-slim-fit large is another’s regular medium?

Trunk Club, a men’s clothing service that provides members with trunks of upscale clothes selected by personal stylists who choose what to ship based on the results of an initial “style survey” (your self-proclaimed style level is “clueless,” “confident,” or “aficionado”), was created to help guys overcome these challenges.

The Clubhouse, Trunk Club’s informative blog, meanwhile, complements the service by disseminating the company’s ethos across the Internet. As I learned from the blog’s creator and editor, Joe Jarvis, the trick to getting men interested in how they look has very little to do with Mrs. Fields cookies and everything to do with finding the right voice. 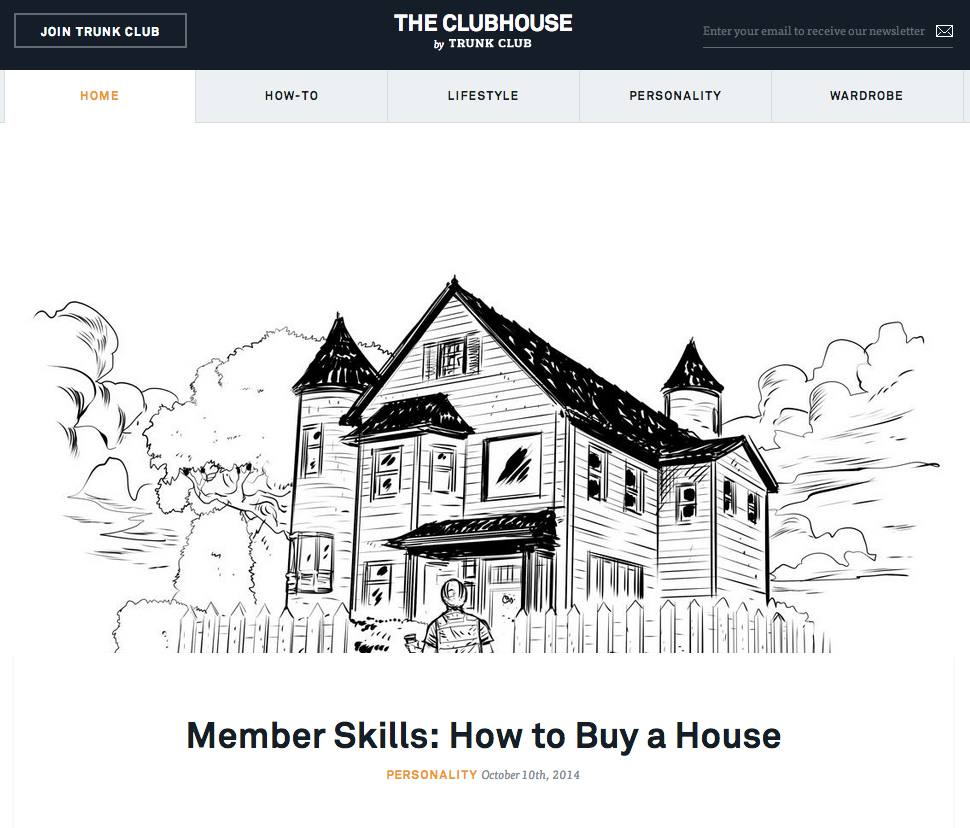 “There was no scientific approach”

The blog was one of Jarvis’ first creations when he started at Trunk Club in April 2012. The Trunk Club team, he thought, had more style knowledge than “anywhere else in Chicago—maybe in any other place in the U.S.” That knowledge had been limited to one-on-one interactions stylists had with members—the cornerstone of Trunk Club’s business. Jarvis envisioned the blog as a place to bring that knowledge to the wider world.

“There was no scientific approach,” Jarvis said. “I’d often ask myself, ‘What is a guy entering into a search engine that leads him to a post we’ve written?’ Not in terms of SEO, just simply, what would someone type into Google.”

Many people, apparently, were searching for advice about whether it’s okay to wear dress shoes with jeans. Jarvis’ friend had mentioned he’d asked his co-workers that same question, so Jarvis asked his own (stylish) co-workers for their perspectives. “Now, if you do a search for that,” Jarvis said, “our story is the top hit on the Internet.”

Jarvis’ tenure at Trunk Club has been a paradigm of brand-voice proactiveness.

He saw, in his first week on the job, that Trunk Club’s Twitter was fairly inactive, so he took over the account to touch base with anyone who mentioned the company. After noticing that Josh Tsui, a Chicago-based video game designer who had worked on Mortal Kombat, was a new follower, Jarvis reached out to him directly, and a few months later, at Tech Week in Chicago, Tsui was wearing all Trunk Club.

Later, Jarvis found Trunk Club’s email presence lacking, so he began sending members informative emails, the first of which was about having a shoe rotation. Jarvis drew an analogy with a baseball rotation to make the advice more relatable to those who might be more comfortable talking about sports than their Tuesday kicks.

From day one, the two components of the Trunk Club brand voice have been a friendly, conversational tone (“not fashion-y at all”) and a trustworthy, informative stance that isn’t pushy.

“You’re much more likely to do business with someone you trust,” Jarvis said.

As for the writers themselves, Jarvis likened his editorial setup to a “barbershop quartet or a choir—voices working together within the same realm.” The need to keep a consistent voice will become more pertinent as The Clubhouse adds freelance writers, but Jarvis thinks the voice “will only continue to get richer and more diverse as we expand our operations.”

Two of the blog’s sections, How-To and Wardrobe, explicitly relate to men’s fashion. The other two, Personality and Lifestyle, have a much broader scope. It’s the content in these latter sections that accounts for much of Trunk Club’s brand voice.

The “I’d Rather Be” series, for example, provides prospective members with a sense of who uses the service by profiling what current members do beyond just dressing well. “We’d heard some people say in the past that Trunk Club is too preppy,” Jarvis said. “But is it when you have artists and different chefs using the service?”

Similarly, the “Member Skills” series is all about story-driven content. “It has nothing to do with clothing at all,” Jarvis explained. “But the whole concept there is: Okay, our content hub is called ‘The Clubhouse,’ and what’s a clubhouse? It’s where you can mingle with other members. … There’s an element of bullshitting to a clubhouse, just telling stories. I wanted to have that spirit.”

The first post on “Member Skills” was “Spotting a Liar, ”a fascinating story featuring original illustration, in which an FTC lawyer gives insight into how to tell whether someone is lying. 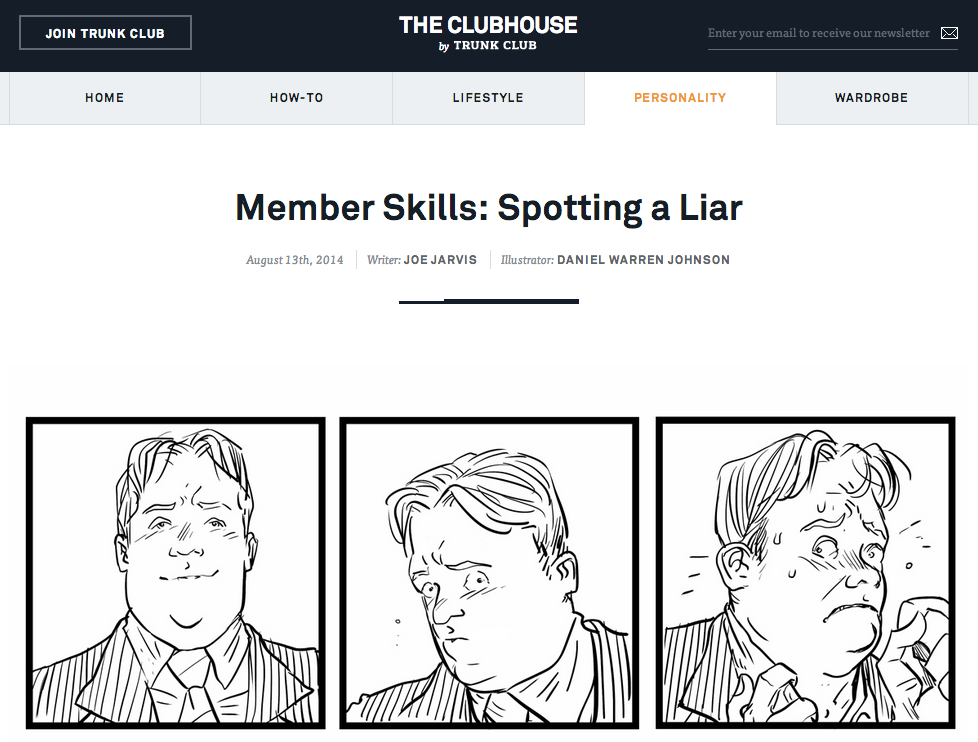 The second post, “How to Buy a House,” offers advice from the president of a Chicago-based residential development company. (“If you’re looking to buy an existing house, you need help from three people: a good broker, a good inspector, and a good attorney.”)

While Jarvis has “seen some insights that guys signing up via the blog are X times more likely to transact” with Trunk Club, his team has not yet analyzed traditional traffic metrics. Nonetheless, he expects his team—led by Oddie Gopalan, Trunk Club’s data analyst—to more carefully scrutinize metrics in the future.

More immediately noticeable to Jarvis has been the blog’s qualitative success. “Every time I walk by the desks of the stylists of Trunk Club,” he said, “and they’re on the phone with a member, I overhear, ‘You can see that on our blog.’ It warms my heart to know that The Clubhouse is a very tactical thing that our stylists use to educate our members.”

For now, The Clubhouse’s success can be measured in dollar signs. This summer, Nordstrom acquired Trunk Club for $350 million, a sum that shows the company’s value as a necessary fashion and lifestyle resource for men.

With Nordstrom involved, one might expect the shackles of corporatism to lead to a sudden decrease in the freedom to be creative and honest when publishing. Jarvis, however, doesn’t see the massive retailer’s presence as a restraint.

“It’s been business as usual,” he said. “They’re an awesome company, and I see them more as a kind of big brother—in a good way. Not Orwell’s Big Brother. They really understand their customers and make sure their experience is personalized. And that’s really what Trunk Club is trying to do by creating useful content.”

While Jarvis hasn’t been approached by brands to create sponsored posts, and currently doesn’t see the need for them, he nonetheless feels The Clubhouse represents brands in the best way possible.

“The idea for [“Getting It Right”] was let’s show guys exactly what our partners put into manufacturing and design and concepting their clothing that makes them high quality,” he said. “There’s no involvement on an editorial level. But we only bring in brands we’re really excited about, and people are, in turn, excited to be featured by us. … I’m proud of our brand. I want to talk about our brand. The great thing about writing for Trunk Club is is that all I have to do is tell the truth all the way.”