On June 30, the Supreme Court voted on Burwell v. Hobby Lobby, deciding that closely held corporations aren’t required to cover their employees’ birth control costs under the Religious Freedom Restoration Act. Women in favor of birth control (a lot of us, it turns out) were outraged that some employers could deny birth control coverage due to religious beliefs.

So was Planned Parenthood, and they went on the attack. But they weren’t just armed with a press release. Instead, they released an armory of powerful content across social media, their owned media sites, and publisher sites.

Given the slow-moving court process, Planned Parenthood had time to gather momentum on social media. When the Hobby Lobby debates started in March, Planned Parenthood raised awareness with the hashtag #NotMyBossBusiness. Women’s organizations and politicians like Nancy Pelosi and Kirsten Gillibrand joined the online protest, and the hashtag went viral.

In the days leading up to the court ruling, Planned Parenthood and women’s activist group UltraViolet informed their audience on potential outcomes with an infographic:

When the Hobby Lobby decision was announced, they helped fuel their audience’s incredulity with highly retweetable statements: 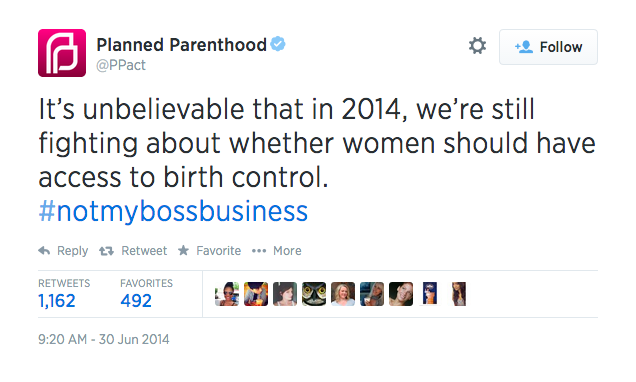 Planned Parenthood also matched all donations to the organization the day of the decision, encouraging people to fight back financially. The next day, they poked fun at the decision with a vintage “I Love Lucy” photo and a serious message: “It’s 2014, not 1950. Times have changed.”

It’s not 1954 anymore—and this debate over women’s access to basic health care is retro in a bad way. #JointheDissent pic.twitter.com/nFluDf8ky1

When Senate Democrats proposed the “Not My Boss’ Business Act” in mid-July—seeking to nullify the Hobby Lobby decision—Planned Parenthood produced Hobby Lobby Myth vs. Fact cards to educate their audience on responding to opposing opinions.

That same day, they published a “100 Years of Birth Control” timeline showing how far we’ve come, and the setbacks women have faced along the way. It was liked over 4,000 times on Tumblr, while a GIF on abortion restrictions over the years got more than 6,000 likes. Unlike yet another complicated think piece, these images unraveled the issues in a straightforward visual format, telling a story that readers could process in just a few seconds. (I love you, Ruth Bader Ginsburg, but your 35-page dissent was really hard to get through.)

Seeking to broaden their audience, Planned Parenthood chose BuzzFeed as an outlet for longer-form pieces. But they didn’t pay hundreds of thousands of dollars for sponsored content, opting instead to post as a Community Brand Publisher. They’ve made healthcare more obvious before with posts like, “The Affordable Care Act as Explained by ‘The Hunger Games’ Cast.”

To keep Hobby Lobby in people’s minds, they created “5 Elected Officials’ Ridiculous Reactions to Hobby Lobby.” The Facebook post for the listicle got over 250 shares and nearly 1,000 likes. Mixing earnest quotes with “hard fact” cards, Planned Parenthood delivered a one-two punch of seriousness and humor. They naturally understood what BuzzFeed’s audience wanted; saying “Obamacare rocks” seems to resonate much more when it’s followed by a Bridesmaids GIF. The snarky language and comic imagery would be just as fitting on Jezebel or a feminist Tumblr.

Finally, writer and Girls creator Lena Dunham came out as a spokesperson for Planned Parenthood and birth control last week. The partnership seems natural; the star supported Planned Parenthood long before they funded her book tour. To continue connecting the Supreme Court issue to real-life women, Dunham asked her 1.66 million Twitter followers, “Why do you need birth control?” The question received 1,600 favorites and nearly 500 retweets. Planned Parenthood has inevitably already asked its audience the same question, but young women are more likely to respond to the self-mocking “voice of a generation” than a hulking (albeit friendly) nonprofit.

I need birth control because I have endometriosis and it helps manage pain. Why do you?

Whether they’re engaging their audience through infographics on Tumblr, snarky headlines on BuzzFeed, or subtle partnerships with millennial stars, Planned Parenthood has harnessed the momentum of the news, using content creatively to to make political issues matter-of-fact and compelling. I’d like to see an opposing organization with that command of content.