The Hidden ROI of Speaking Engagements

A few weeks ago, I asked my boss if I could hire a public relations intern.

“Sure, no problem,” he said, before adding, “but Gavin will have to sign off.”

So while I was racking my brain to remember how many three-day weekends I took last summer, I was also trying to think if I’d brought in any business for Contently through my efforts as communications manager.

But I couldn’t make a half-assed case. It’s great from a PR perspective if Digiday covers our company, or if I get a VP to speak at Content Marketing World, but how does that directly affect Gavin? He has one clear question: For every dollar that Contently allocates to PR, how much money will Contently get back?

To answer that question and get the okay for an intern, I set out to prove that my work has helped the company get leads in the pipeline.

A bit of math

Earned speaking engagements are huge lead generators and an important part of PR initiatives. The best part is they’re usually free. To calculate the ROI of a speaking opportunity, you need to decide how your company determines attribution.

Since there are different approaches, the process can get tricky depending on individual preferences.

Here’s a simplified example of how we do things at Contently with a multi-touch model, courtesy of Sam Slaughter, Contently’s VP of content and my boss: If we sign a $100 contract from an inbound lead that first encountered Contently when our CEO spoke at a conference, $50 is attributed to PR and $50 gets attributed to sales. (If there are multiple PR touch points, those are weighted accordingly.)

But do you really get leads from speaking?

Marketers tend to consider earned media coverage more valuable than an ad because earned media implies that your company is relevant and newsworthy enough for publicity that doesn’t require any payment. The same can be said for earned speaking engagements.

Sponsoring an event is like being the kid in high school whose wealthy parents are always out of town—you’re being used for your resources. Receiving an invitation to speak at a conference is like being the popular kid who always gets invited because your presence will boost the party’s reputation. Audiences pick up on this dynamic at conferences.

Sure, speakers won’t get a list of 500 attendees to cold call just from giving a keynote presentation, but that one person who comes up to your executive after the speech and asks to connect at a later date could be worth more than 100 paid ads.

In 2015, Contently executives participated in 42 earned speaking engagements. We paid roughly $10,000 for travel costs (these were some events with great audiences, so we covered the hotel and airfare). Three contracts closed from these events with a total value of $220,000. After subtract the $10,000 in expenses, we’re left with net value of $210,000. So using our initial equation we borrowed from Sam:

Then, to calculate ROI, you plug that PR attribution into another simple equation:

Note that this doesn’t factor in my salary or the potential salary of the intern, but I (and any PR person worth her salt) have many more responsibilities than just pursuing speaking opportunities, so I’ll leave that up to you to factor it in as you see fit.

If you’re interested in getting more appearances for your employees, the first step you need to take is compiling a master list of events. It helps to set up a scoring system to prioritize the conference calendar. Who will be at the event? Where is it located? What topics are the organizers planning to cover? There are hundreds of conferences out there, so grading them will save you a lot of time. 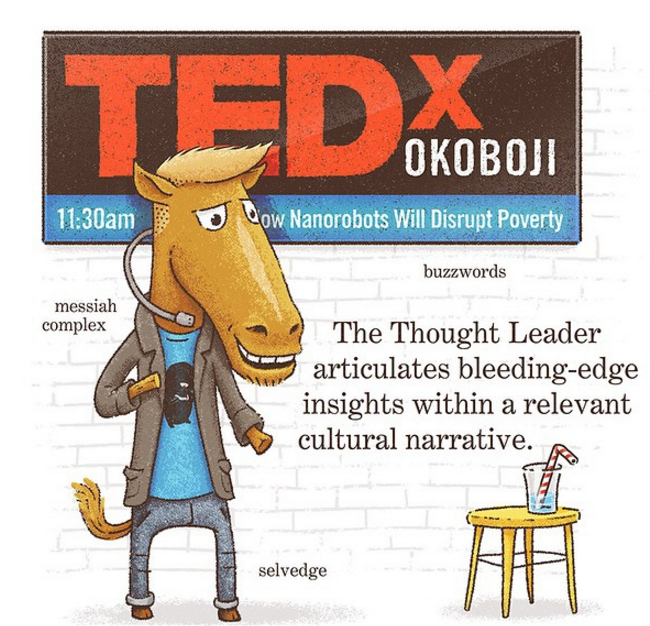 Contently’s PR opportunities ultimately come from one of two ways. Either I reach out to my contacts or I handle inbound requests. That’s where good content makes a significant impact—an important part of speaking that people often ignore is having something new and noteworthy to say.

Regardless of whether I’m pitching a speech or evaluating an inbound request, I need to be able to provide interesting information to close the deal. The most useful way to do this is through guest bylines. When executives write for reputable media outlets, it demonstrates they actually have thoughts they can articulate. Here’s a recent example from our CTO, Dave Goldberg, that was published by NextView Ventures: “How to Found a Startup in a New Industry.”

Press mentions also work well, specifically interviews, which show that other people care what your executives think. Here’s an example of an interview that turned into a feature article in First Round Review: “Content is Eating the World — Contently’s CEO on Winning at Marketing’s New Hotness.”

When I pitch the appearance, I’ve found that mentioning past speaking opportunities can make a difference. Presumably, doing so will put the organizers at ease. But to make sure I don’t burden them, I typically offer a pithy headline and a 100-word description. The goal is to clearly convey the topic, not outline the entire speech.

And once you’ve scheduled a few speeches, the last step is to create a speaker highlight reel, which is actually becoming a requirement for a lot of opportunities I come across. The reel can be specific to one person or include all of your executives. The clip should be brief—no longer than two minutes—and exciting, with strong sound bites from past speeches.

Once I secure the speaking opportunity, my job isn’t over, either. I have to help the speakers to make sure they’re ready to make a good impression. This can include putting together the deck for them, prepping them on the audience and the other speakers, going through practice runs, and providing critical feedback. The level of your involvement will vary depending on the public speaking abilities of the executive, but the last thing you want to do is sit back and say, “It’s up to them now.” They only have one chance to make an impression on an audience to drive those leads. And their success will have a direct impact on your success. Eventually, your biggest problem should be vetting inbound requests and being cognizant of the fact that the executives (supposedly) have real jobs to do.

To bring it all full circle, Gavin is one executive who almost always has a real job to do—besides that one time he live-streamed the Europa League during the workday. After I showed him the ROI of our speaking engagements, he had no problem signing off on a PR intern.