Jane Fonda, co-founder of the Women’s Media Center and ’80s workout extraordinaire, once said, “Gender inequality is so deeply ingrained in our culture, most people don’t realize there’s a problem.” While Fonda was talking about our culture at large, she could have very easily been talking about the media world.

The WMC’s latest report, “The Status of Women in the U.S. Media 2014,” is 80 pages of mind-blowing statistics about the underrepresentation of women in the media today. The study covers every aspect of entertainment and news, from gender in sports journalism to film production and radio.

“Overall, this research is about … making sure that who defines the story, who tells the story, and what the story is about, represents women and men equally,” explained Julie Burton, president of the WMC.

Kate McCarthy, director of WMC SheSource, told me, “At present about 24 percent of news sources in the U.S. are women.” Clearly, the U.S. is far from establishing a state of gender equilibrium in the media; the voice of 51 percent of the U.S. population is grossly underrepresented. 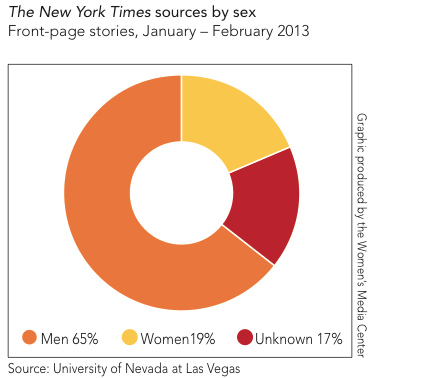 The extreme lack of diversity in the media is even worse if you turn on a Sunday morning talk show: 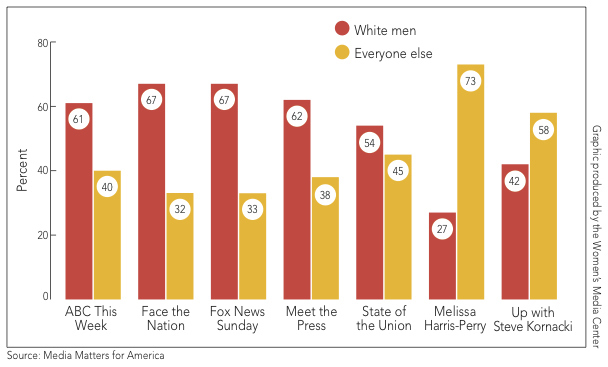 White men are so common on these shows that every other ethnicity and gender is still largely trumped. It’s shocking to see in a tidy graph.

Dr. Patricia Phalen, associate professor of media and public affairs at George Washington University, has a theory regarding the disproportionately higher representation of men in the media. “When someone books an expert, they are likely to rely on their ‘Rolodex,’ which likely has more male experts than female,” she said. “In the past, more men have made themselves available as experts—and they have been very good about getting their names and profiles to the media. Women haven’t been as good at doing that.”

Thankfully, the WMC has found a way to begin solving this problem: SheSource. According to its homepage, SheSource “is an online braintrust of female experts on diverse topics designed to serve journalists, producers and bookers who need female guests and sources.”

I decided to test out SheSource by using it to find experts in gender and the media. The process was simple: I entered the keyword “women in the media” into the website’s search bar and selected “media and entertainment” as my desired area of expertise. After a single click I was presented with dozens of highly qualified women available for interview. By the next day I was on the phone with Lisa Brateman, a psychotherapist and media spokeswoman.

Brateman has been listed as an expert on SheSource for two years, having landed a number of invaluable opportunities as a result. “I’ve been on CNN.com, Harper’s Bazaar, a lot of really big places,” Brateman explained. “And it’s all because they found my profile on SheSource. They put me out there in a way that just doesn’t happen by itself.”

Despite her professional accolades, however, Brateman has still felt overlooked on male-dominated panels. “Once I was on a panel of four experts in front of a very large audience. So many of the questions, even though I was the one most qualified to answer, still went to the men,” she said. “It’s still an assumption that men go first and women get the leftovers.”

Thankfully, SheSource and the Women’s Media Center are starting to break down the boys club in the media world. For example, SheSource works with media executives and journalists to ensure that their sources are representative of their audience. “It is easy to fall back into old ways—change takes intention and effort,” Kate McCarthy, the website’s director, said. “We are constantly reminding journalists how important it is, and then helping them include more women’s voices in their reporting.”

One of the ways that SheSource accomplishes this is by distributing a weekly listing of female experts qualified to discuss major current events. For example, this week Debbie Hines, practicing trial attorney and member of the Supreme Court bar, is noted as a great source to interview about the Michael Brown shooting. These experts can also be found on the “Latest News” section of the website.

Thanks to SheSource, other resources for women in the media are popping up. The OpEd Project and the Alliance for Women in Media are training women to be experts in their field. Out of the Binders is forming communities of female writers and creating job opportunities.

Said Burton: “Only when women are equal partners in the multi-layered work of deciding what constitutes a story and how that story might be told can we paint a more textured, accurate picture of the worlds that we all—male and female—inhabit.”