Miki and Radha Agrawal didn’t plan on disrupting the feminine hygiene industry when they entered a three-legged race. All they wanted to do was win. And the identical-twin soccer stars were well on their way—until Radha felt blood dripping down her leg.

She had her period.

If you’re a biological female, chances are you’ve got a story like this. There you are, in the midst of some totally unrelated event, when your monthly flow shows up uninvited. But instead of tucking away the story to regale friends with later, the Agrawals did something unexpected: They won the race. The event would serve as an inspiration for a business that’s now leading a wave of companies fundamentally changing feminine hygiene marketing.

In recent months, New Yorkers have noticed their subways, cabs, and sidewalks flooded (no pun intended) with campaigns for a product called Thinx, period underwear that holds up to two tampons’ worth of blood and serves as an alternative to traditional menstruation products. But the ads plastered across every train from uptown Manhattan to Bushwick are symbolic of more than just the Agrawals’ product. They’re just one of many current examples of the period’s entrance into the public sphere, demanding—not merely asking permission—to be talked about. 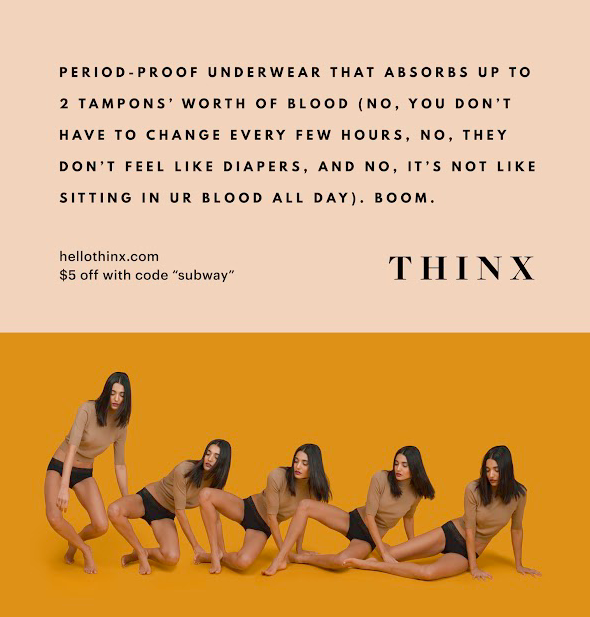 According to NPR, the number of times “period” was mentioned in one of five major media outlets has more than tripled since 2010. But it’s not just major publishers. HelloFlo’s “Camp Gyno” and “First Moon Party” videos went viral. The #PeriodsAreNotAnInsult hashtag erupted when Donald Trump suggested Fox News moderator Megyn Kelly had “blood coming out of her… wherever.” Kiran Gandhi free-bled during the London Marathon. And five women in New York sued the New York State Department of Taxation and Finance over New York’s discriminatory tampon tax.

“Like so many of the enormous cultural shifts we’ve experienced in the last decade, so too has our relationship with menstruation changed dramatically in recent years,” journalist Glynnis MacNicol wrote in Fusion this past March, when she covered the announcement that the British company Coexist instated a period policy to allow women to take time off during their flow.

Nowhere is this period momentum clearer than in New York City’s underground. The images in the Thinx campaign are provocative, though not in the traditional sense. In muted block colors, undergarment-clad models are not sexualized or fat-shamed. Instead, the text promotes a world where women colloquially discuss the shedding of their uterine lining and how to challenge patriarchy as the status quo: “PERIOD-PROOF UNDERWEAR THAT PROTECTS FROM LEAKS AND SOMETIMES THE PATRIARCHY, BUT NOT FROM MANSPREADING. WE TRIED, THOUGH.”

The Thinx ads are a landmark in New York City public space, and they faced obstacles. In October 2015, Outfront Media, the agency that approves Metropolitan Transit Authority (MTA) placements, blocked the Thinx campaign for fear the word “period” and suggestive use of food would offend audiences.

“We can objectify women in their lingerie,” Agrawal told Mic in October 2015, in reference to other MTA ads promoting liposuction and breast augmentation, “but the minute we acknowledge that they might be bleeding in their underwear, it’s no longer acceptable.”

While the subway ads have been a great way drum up publicity for Thinx (not to mention to sell panties), Agrawal says they’re just a tiny part of the company’s mission to break the period taboo and eliminate the shame surrounding the menstruation conversation.

“We are a content company disguised as a period company,” Agrawal declared. A content company that wants to change the way men and women talk about period, women’s bodies, and equal rights.

If this concept gives pause, it should. Can a for-profit, venture-backed company legitimately function as an outlet to discuss important social and political issues? For Miki, the answer has become the company ethos. “Call me a feminist, call me an entrepreneur, call me whatever you want, but I believe in elevating humanity using conscious consumerism as the vehicle to do that.”

Thinx’s blog, Periodical, is rich with educational information surrounding women’s empowerment and all things feminism. Articles blend politics and pop culture—”In Defense of Gloria Steinem, in Defense of Young Bernie Babes, in Defense of Hillary Honeys, in Defense of Political Ladies Around Da World” and “A Love Letter to Feminist Kim Kardashian” were published on the same day—and explore topics from Kesha’s sexual abuse case to the feasibility of a black Hermione from Harry Potter.

Blog stories are then curated in a weekly newsletter, “This Week in Feminism,” which, much like the MTA ads, is more about the experience than the product.

“Call it period feminism, call it gender equality, call it education. We just want to tell people what’s happening with women,” Agrawal said. “We’re trying to change the shame around the conversation.”

To conceptualize the power of the feminine hygiene industry, it’s first necessary to do some period math. According to the Mayo Clinic, the majority of women menstruate every 21 to 35 days, with their period lasting two to seven days. The average woman thus bleeds between 21 and 122 days each year. (Yes, for some women, that is nearly one-third of the calendar year.)

The American Academy of Pediatrics estimates that adolescent women use anywhere from three to six pads or tampons per day of their cycle—between 63 and 732 tampons each year. To give an idea of what this looks like in actual cost, in the state of New York, the average box of 32 tampons is $9.00. That’s $18.00 to $206.00 per year, depending on the heaviness of her flow. Tampons, pads, liners, cups, cramp medications, wipes, and other period products add up to a $15 billion industry. 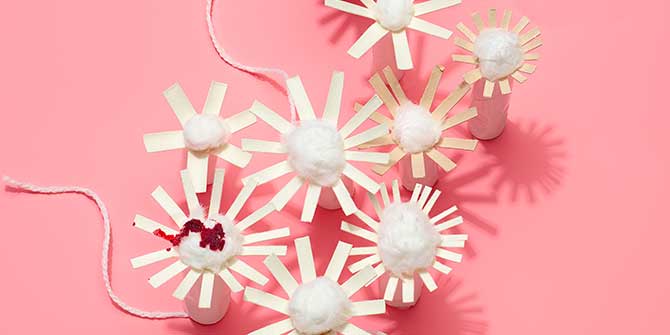 But while profits for these companies grow, product innovation remains stagnant. With the invention of the pad, cup, and tampon, there have been only three major developments in the menstrual product industry since the 1920s. Acceptance of menstruation as a natural process has been even slower.

The surprising thing about recent shifts in the feminine hygiene industry is not product innovation. It’s the way companies like Thinx have used the content surrounding these products to liberate the period conversation from sterile and stigmatized language.

When Naama Bloom started HelloFlo, she envisioned a feminine hygiene subscription service. What she wound up with was a content company that’s making hard conversations around periods go viral.

“Initially, I saw all of these subscription services, and I thought, ‘Why isn’t there anything that I would want to pay for?'” Bloom said. “I tried to think about how I could solve a problem versus sending something luxurious.”

HelloFlo offered pre-packaged subscriptions for a box of menstruation goodies—tampons, liners, lip balm, candy—for women and girls on their period. To market her service to a wider audience, Bloom partnered with larger feminine brands to deliver three- to five-minute YouTube videos.

“Camp Gyno,” which chronicled the rise and fall of a preteen whose arrival of her “red badge of courage” caused her to become drunk with power, got over 11 million views. “First Moon Party,” which documented an elaborate period celebration thrown by a mother eager to expose her daughter after she faked her first “lady days,” has been viewed over 35 million times since its release in 2014.

Bloom’s goals with the videos were to present the experience of getting a period with openness and humor (with the end goal of selling subscriptions). Yet something else happened with the distribution of these clips.

“I got thousands of emails from women and men around the world, and they were asking for more content,” Bloom recalled.

The response fundamentally altered the nature of her business. “I saw that people were really responding to that, and I thought, ‘Wouldn’t it be interesting to be more about the content around a woman’s health and her body, and then also sell some products that were focused on physical transitions?'”

Since the release of “Camp Gyno” and “First Moon Party,” Bloom has shut down the subscription part of her business (though period starter kits are still available for a one-time purchase) to focus almost exclusively on the production of content that normalizes the conversation around women.

Today, HelloFlo publishes dozens of daily articles to nurture multiple aspects of the female experience: period, mind, and body. A Femspiration section hosts material that combines feminism and inspiration, including “This Video Points Out the Sexism That Exists With Emojis” and “Japanese Editor Hiromi Sogo Wants to Help Women Learn About Fiscal Policy,” while an Expert category provides answers to more detailed medical questions.

In addition to the site, Bloom has launched an educational arm of HelloFlo. “Learn from Her” online classes offer a window into how to manage sugar intake, explore sexual frustrations, and understand the complexities of eating disorders, along with a host of other courses to help women learn about their own health and the well-being of their families.

Bloom’s business model is distinct from the Agrawals’. With comprehensive and organized education as the focus, there is more science, less shock. Yet the similarity in brand mission and approach are hard to ignore. 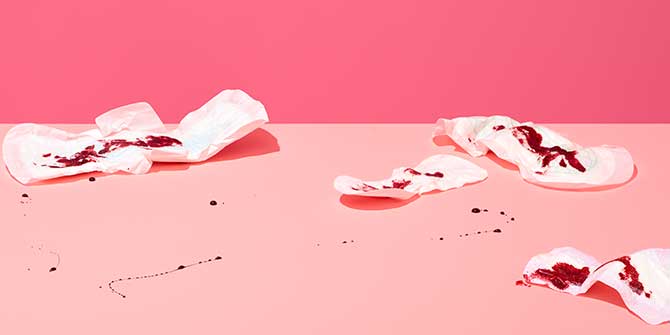 In different ways, both HelloFlo and Thinx have become brand publishers with the social mission of defeating period stigmatization. And they’re led by outspoken feminists.

“Of course I identify as a feminist,” Bloom laughed. “In my worldview, it doesn’t make any sense that someone wouldn’t identify as feminist.”

The decision to confront menstruation taboos places Thinx and HelloFlo within a larger societal framework—and, by extension, a shift in marketing. It’s not just about the underwear or a period subscription box. It’s about the women who use them, and the issues they face both on and off of their period. It’s opinionated, and it’s distinctly political.

The concept of brands using content to push a social agenda is not revolutionary. If Mad Men taught us anything, it’s the ability of the advertising world to shape public perception. What’s unique about HelloFlo and Thinx is how these brands have prioritized feminist conversations over the benefits of the product. And how they’ve done so in the public space.

It’s too soon to know what this means for the feminine hygiene industry—and women—at large. Will big advertisers shift from traditional marketing to content-focused campaigns? Will elevating the conversation around periods lead to product innovation or policy change? Can we expect advertisers to lead the conversation on removing the stigma from something that’s a fact of life for billions of people worldwide? Only time will tell.

But what is clear is that public places—both the Internet and transit systems—have seen a little less shame and a lot more pride in the menstruation process.