Who would you rather have as your president: Donald Trump or a burrito from Chipotle?

On March 2, after Trump swept the Republican party’s Super Tuesday primary elections, I conducted a statistically significant[note]Confidence interval 5 percent[/note] national poll of 402 registered voters from around the United States asking that very question. 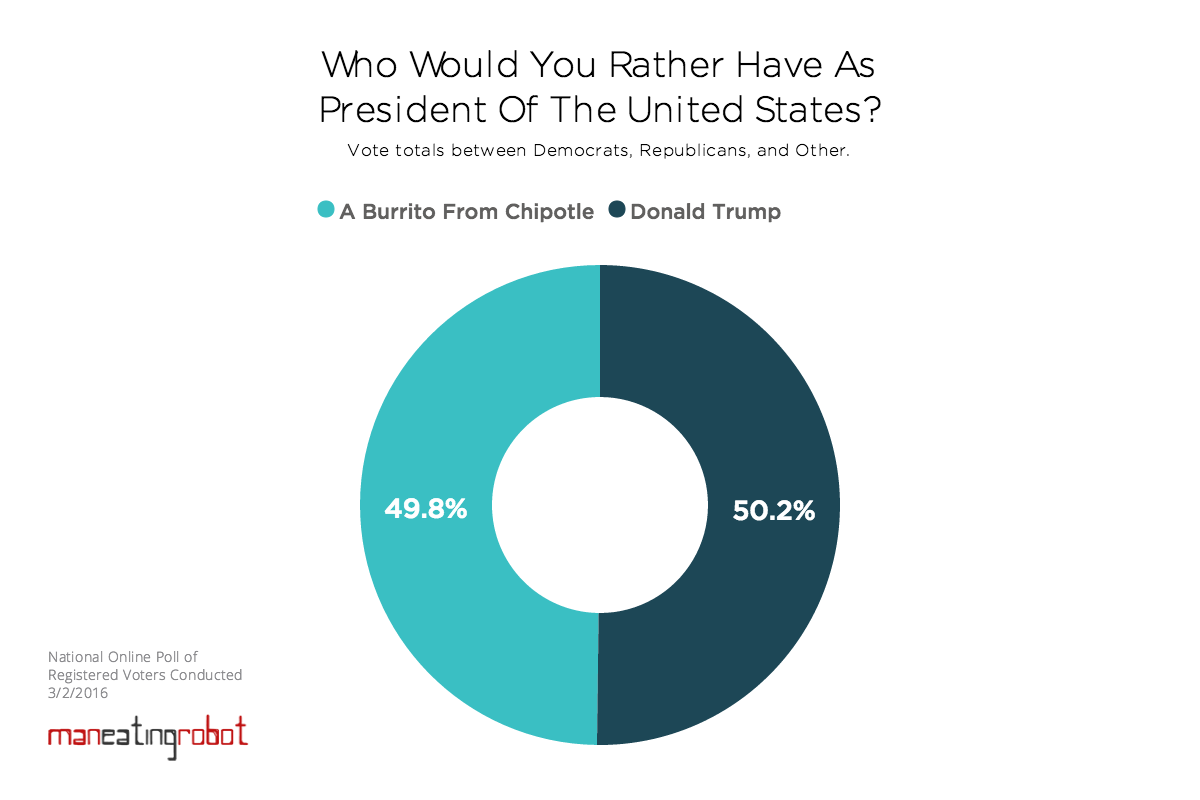 Half of the public would rather live in a country run by an inanimate tortilla containing beans, sofritas, and possibly salmonella than Donald Trump.

This included 28 percent of Republicans polled, 52 percent of Independents, and 63 percent of voters between ages 18 and 29. 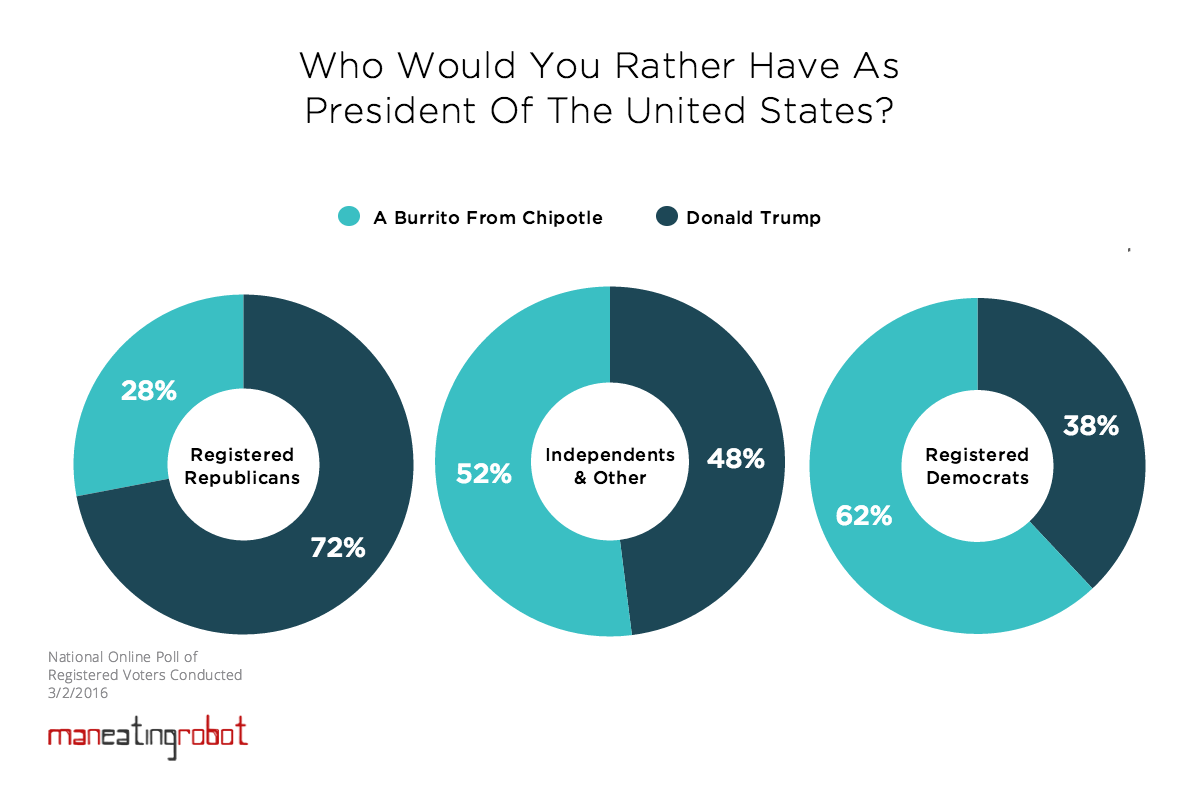 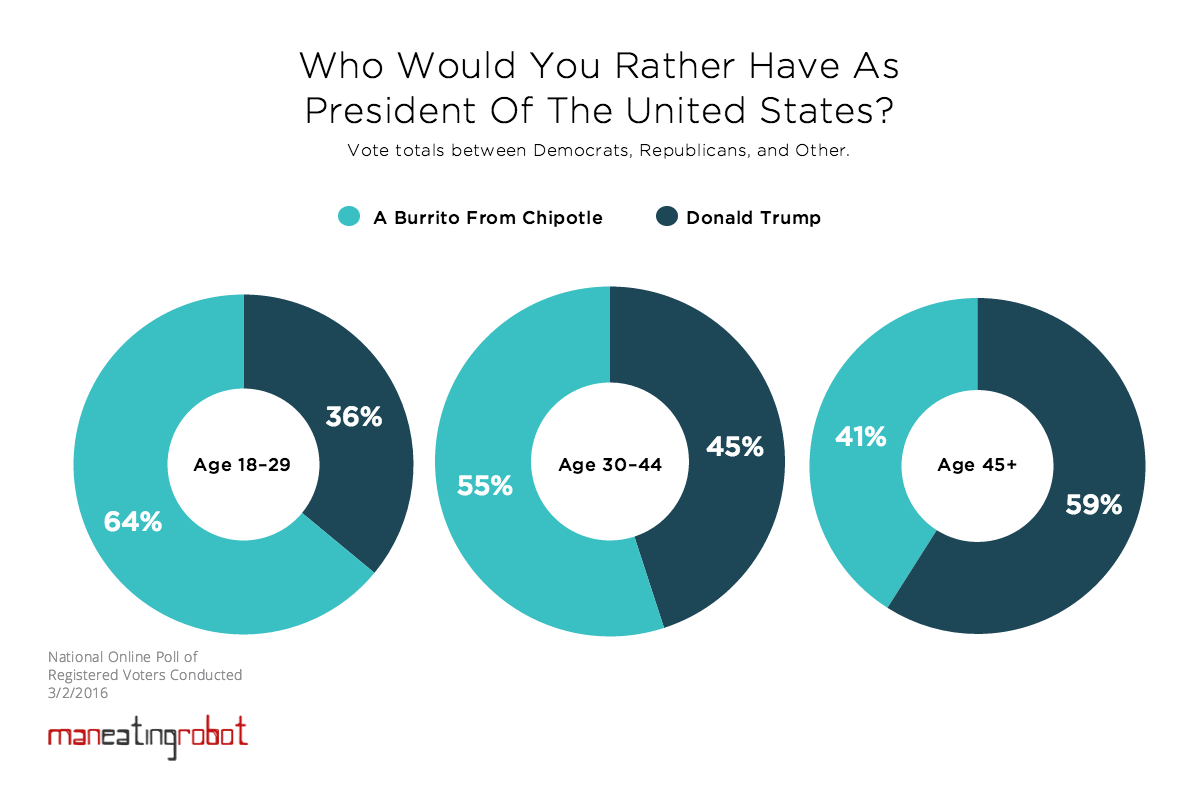 Fortunately for Trump, the U.S. Constitution states that one must be at least 35 years old to run for president. Chipotle has only been around since 1993, so besides being really moldy, its oldest possible burrito would be too young to run against The Donald.

Trump’s candidacy has been so polarizing, with many in his own party panicking at the prospect of him as their standard bearer. But the poll—which we may as well call The Burrito Poll—illustrates just how far voters, Republican, Independent, and Democrat alike would go to see him not be president.

The Burrito Poll also asked voters for their opinions on hypothetical match-ups between Trump and other political figures who are not running in 2016, such as Joe Biden, Mitt Romney, and a third-term Barack Obama. Trump lost to all three. 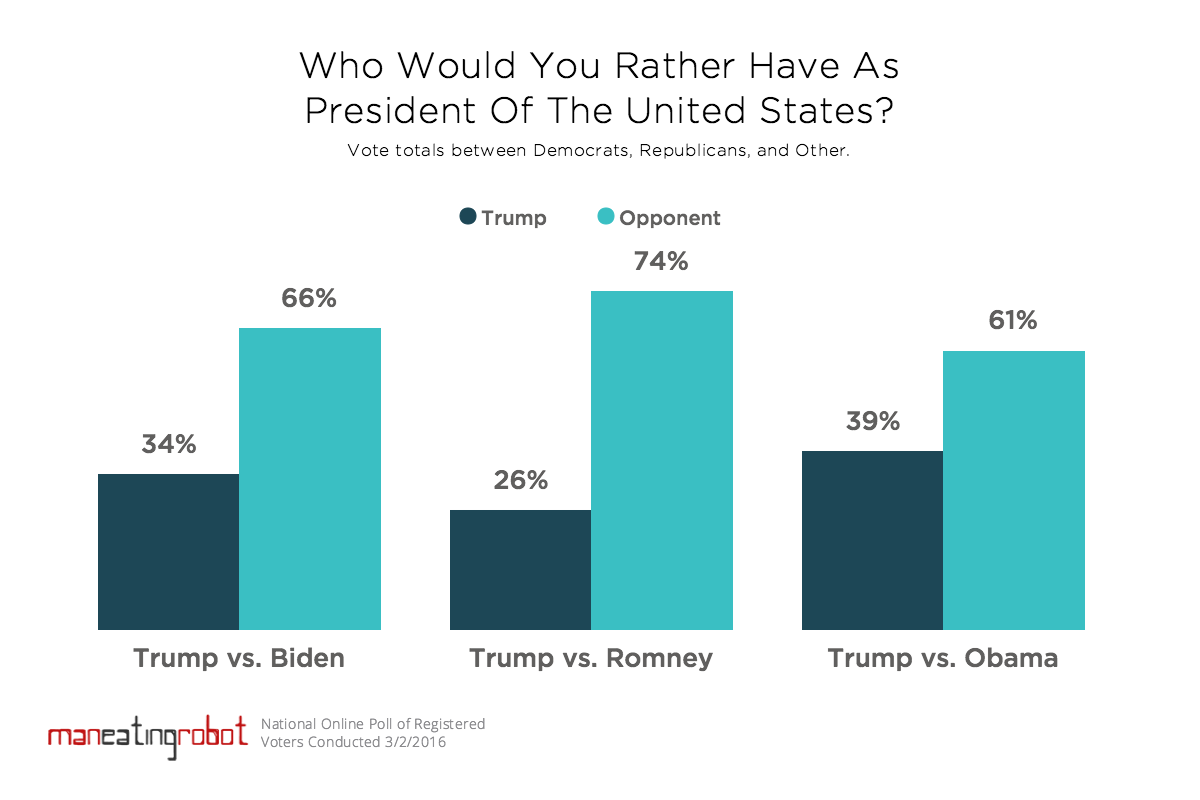 Notably, Biden defeats Trump by a wider margin than Hillary Clinton (see below). And though fellow Republican Mitt Romney wouldn’t actually go up against Trump in a general election, the poll indicates he would be the strongest candidate in a hypothetical contest. 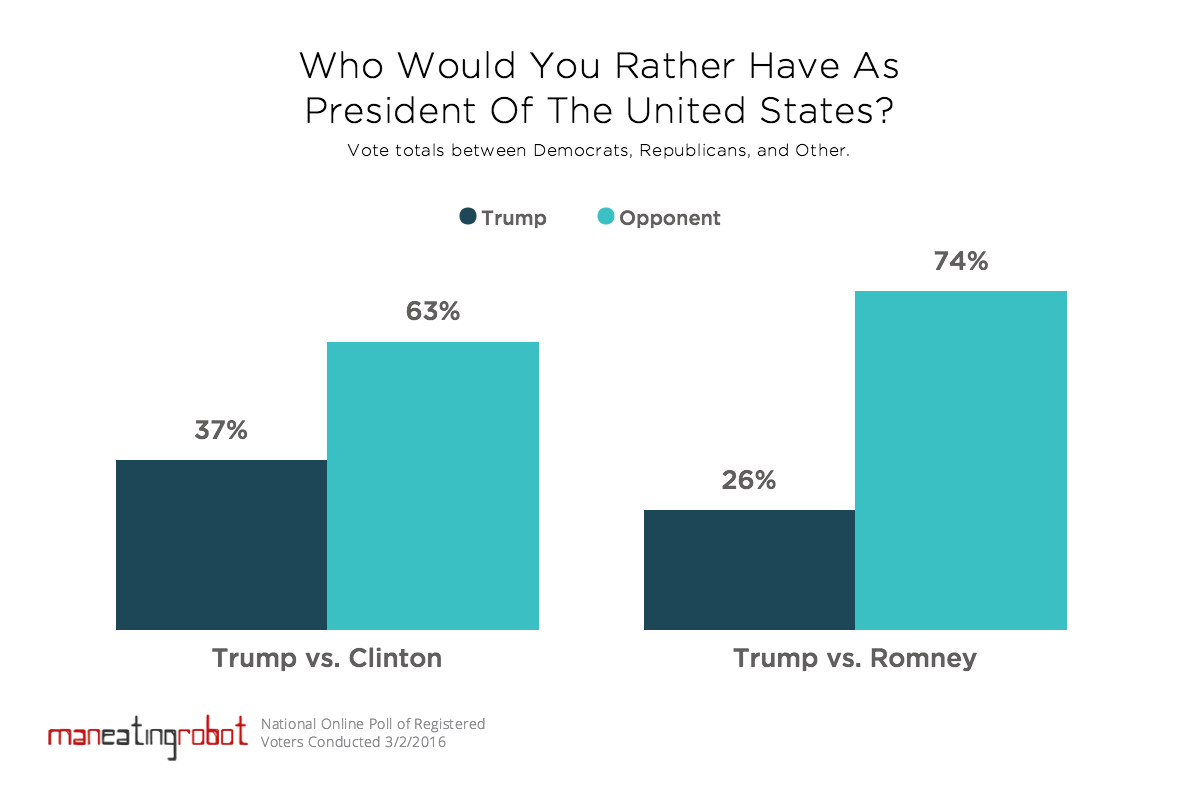 It turns out that more than a quarter of Republicans would be willing to cross the aisle to vote for Democratic candidates if Trump were the GOP nominee, with 26 percent claiming they’d switch for Hillary, 31 percent for Biden, and 24 percent for Obama.

Trump isn’t a politician, which is part of his appeal to his voter base. So how would America vote if Trump went up against other non-politicians? The Burrito Poll also pitted Trump against reality TV stars, celebrities, inanimate objects, and other businesspeople.

The results suggest that most voters would not be willing to put another reality TV star in the White House, with the exception of Mike Rowe, whose show, Dirty Jobs, is quite apropos: 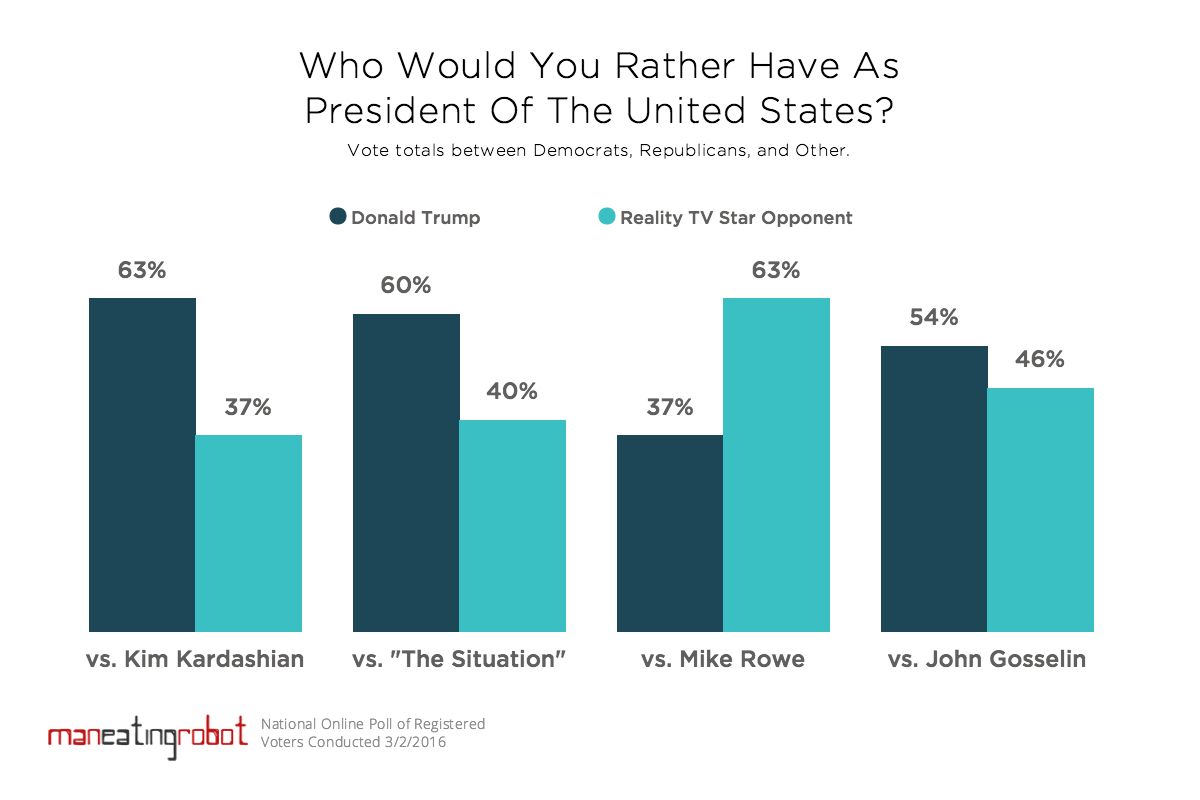 I also opened up the comparisons to more mainstream celebrities. Americans apparently don’t trust Kanye, but they would be willing to put Bill Pullmna, the man who played the president on the movie Independence Day, back in the White House over Trump,[note]And after watching this speech, how could they not?[/note] as well as Ellen Degeneres, Denzel Washington, and even Mel Gibson. George Clooney beats Trump worse than every other candidate so far with the exception of Romney. 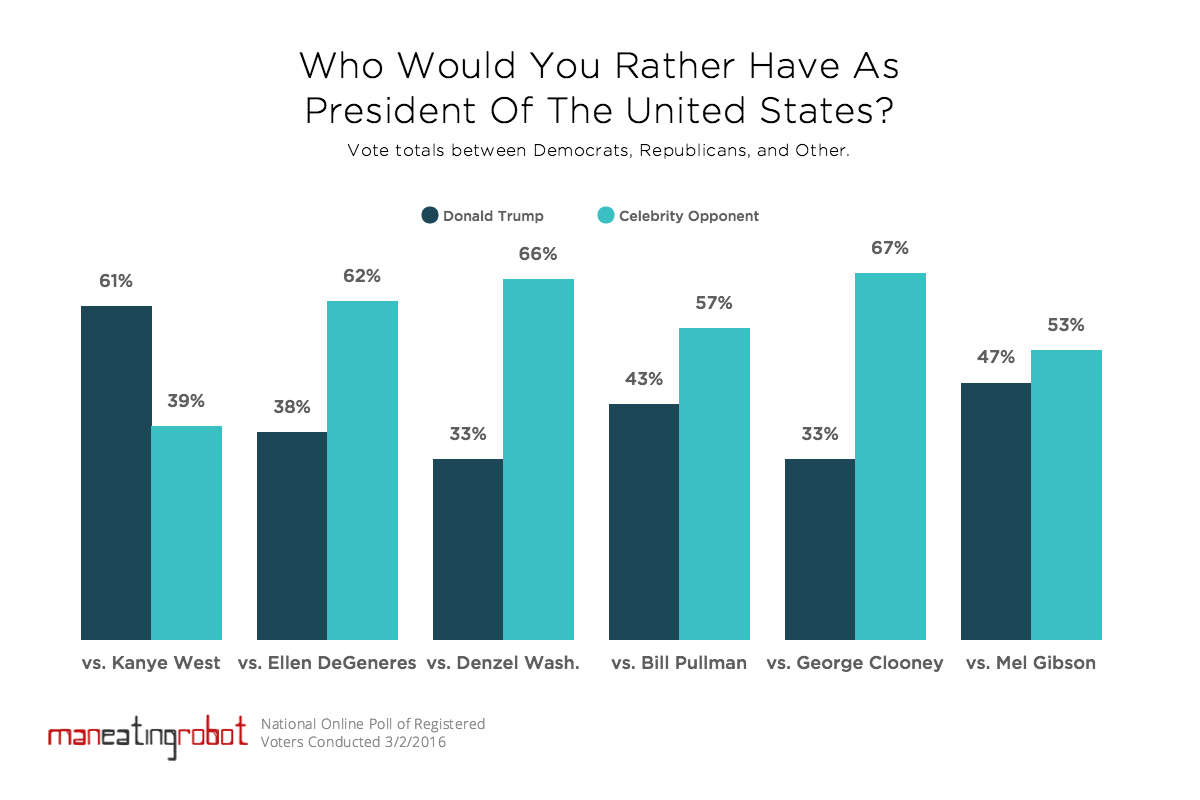 While a burrito essentially ties Trump, 22-year-old Justin Bieber gets slammed, and IBM’s Watson robot—the one that beat Ken Jennings on Jeopardy—wins easily. 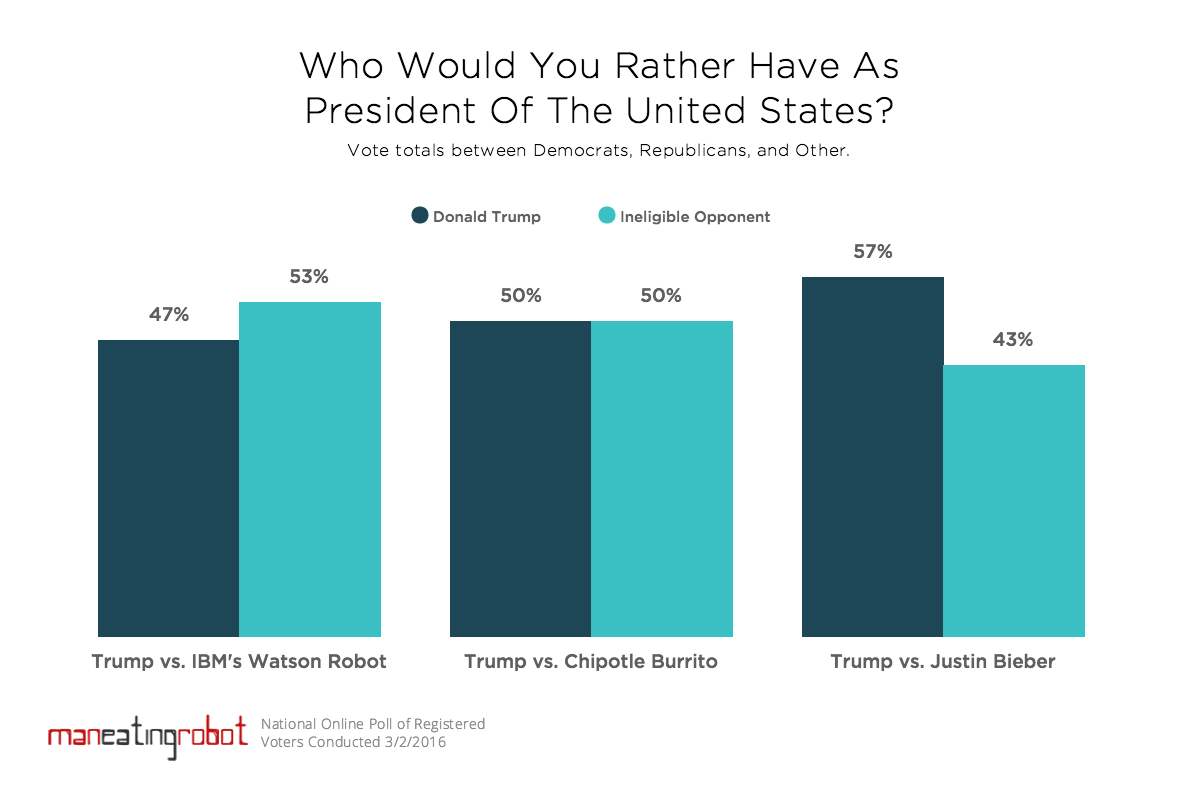 Hypothetical running mates Larry Page and Sergei Brin, the billionaire founders of Google, have the same amount of political experience as Trump but defeat him by a landslide, especially among young voters: 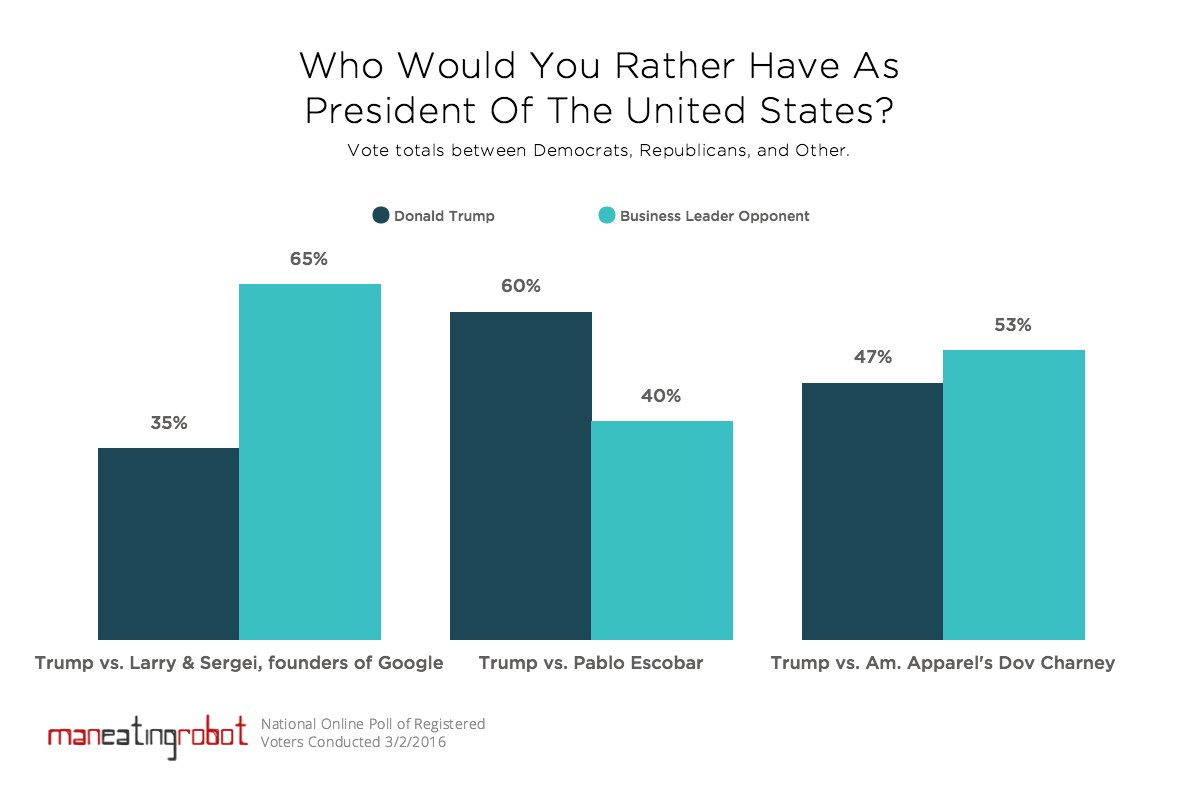 Disgraced American Apparel CEO Dov Charney narrowly beats Trump as well. And if the election were only up to 18- to 29-year-olds, America would elect Pablo Escobar as president over Donald Trump—even though Escobar has been dead for 22 years. 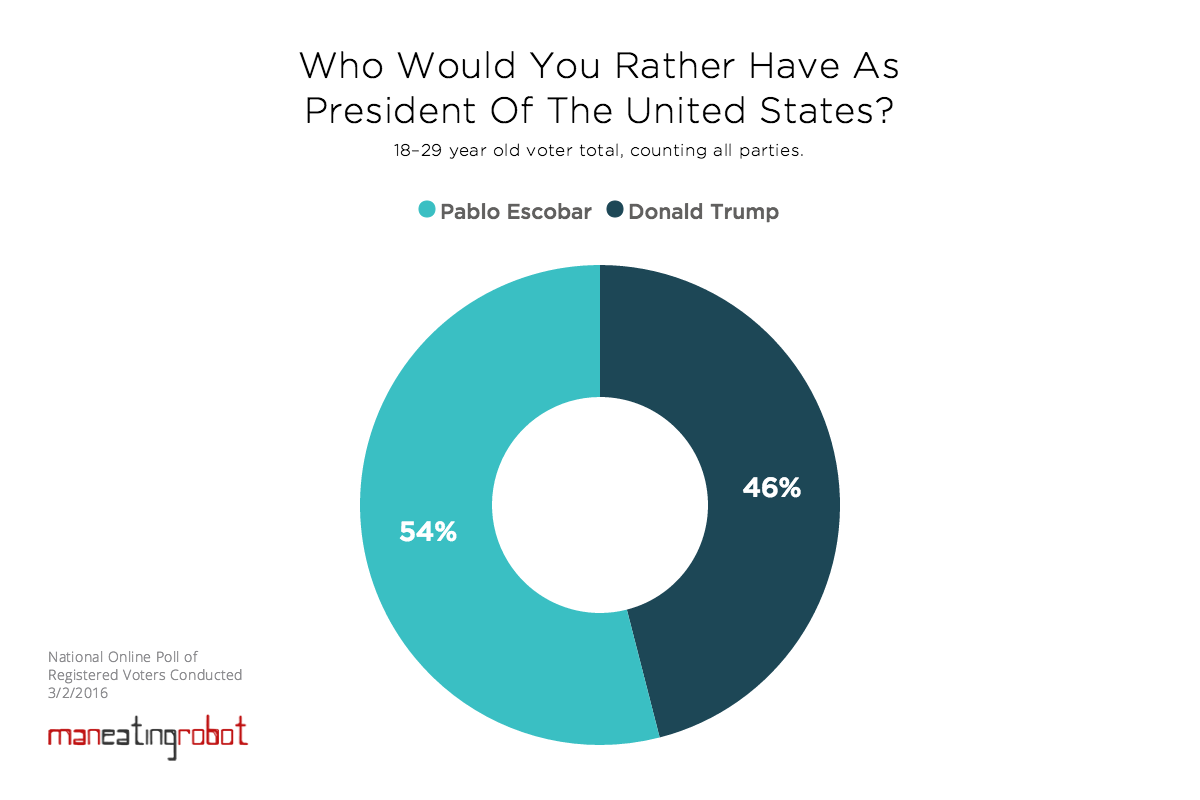 The Burrito Poll also pit Trump, a man whose name is synonymous with consumerism and branding, against some popular consumer brands. How would America vote if they could elect McDonald’s as POTUS instead of Trump? 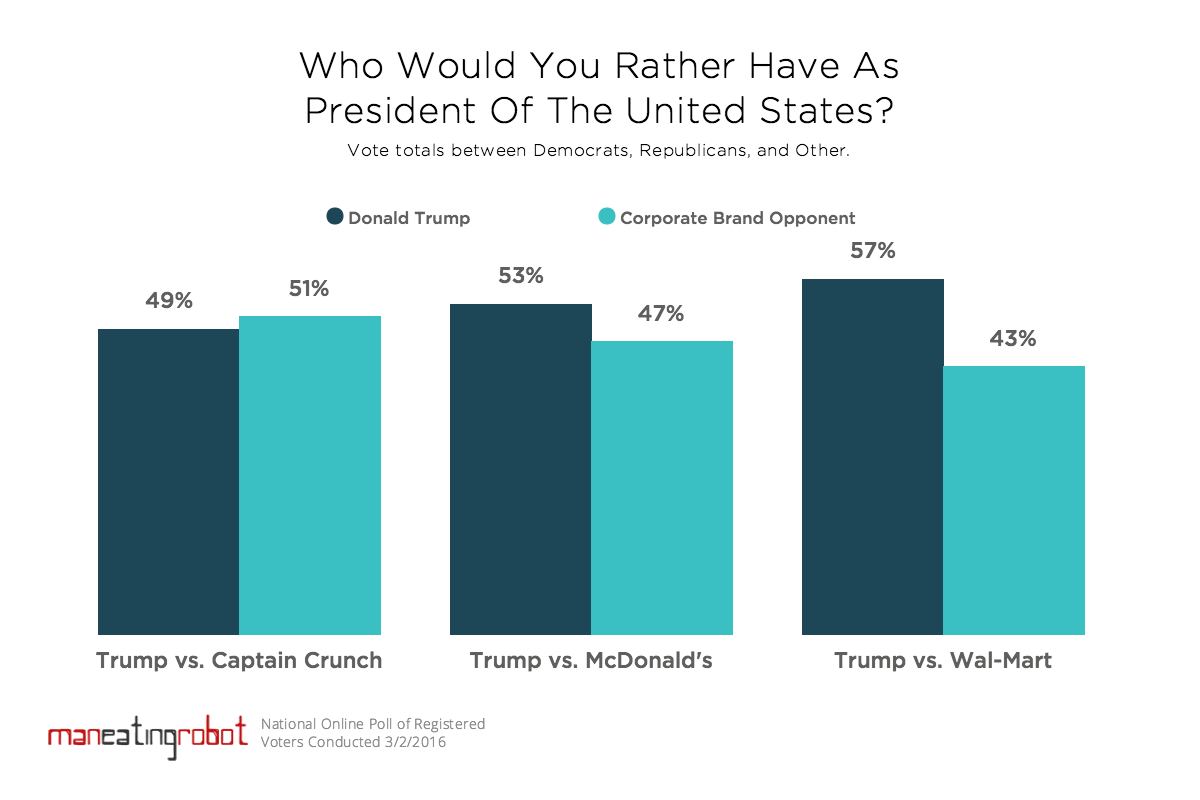 Great news for Captain Crunch: America wants YOU. That’s right: By a slim margin, Americans would elect this president over Donald Trump. 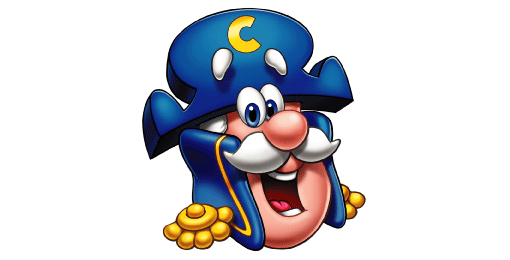 Unfortunately for the other two brands, young people are the only ones who actually would prefer Walmart or Mickey D’s over Trump. Eighteen- to 29-year olds favored the world’s largest department store chain by a 4 percent margin.

Turns out there are a lot of people (and companies) Americans would rather see in the White House than Donald Trump, but despite the growing influence of brands in our lives, we’re probably a few elections away from a dystopian corpocracy. Most of us would still rather have a person than a brand as commander-in-chief.

Although if The Donald wins, we’ll essentially have both.