An Incredibly Dorky Look at Each Presidential Candidate’s Technology Stack

The prevailing media narrative for the last two U.S. presidential elections confirms what our high school math teachers always told us: It pays to be nice to nerds.

Technology, from social media to “big data,” has become the new key to campaign success. This narrative even holds true for political pundits—some people now refer to data geeks like FiveThirtyEight’s Nate Silver as the “true winners” of political elections since they started using technology and econometrics to predict outcomes as if they were the creepy water-hostage people in Minority Report.

In politics, the story now goes, the candidate who wields the most nerd weapons wins.

But now that every candidate has leapt on the digital bandwagon—in the same way that soda brands and insurance companies now crowd onto hip new social platforms like Peach and Ello faster than the average teenager—how true is the “most tech wins” hypothesis in 2016?

The full scope of technology’s role in the 2016 election won’t emerge until after the dust has settled and Donald Trump launches a reality TV show about running the country. But since the technology parallels between political campaigning and brand marketing are striking, I decided to map out each of the current primary candidates’ marketing technology stacks to see how their digital strategies differ.

This is one of the dorkiest things I’ve ever done, but it was also pretty fun.

The backbone of every candidate’s digital strategy is the website. (Behind the scenes, this has created an amusing number of pranks, including the forwarding of JebBush.com to Donald Trump’s website.)

Without fail, these candidate homepages do three things: solicit donations, ask for email addresses, and explain stances on political issues.

Here’s the content management software our candidates are using: 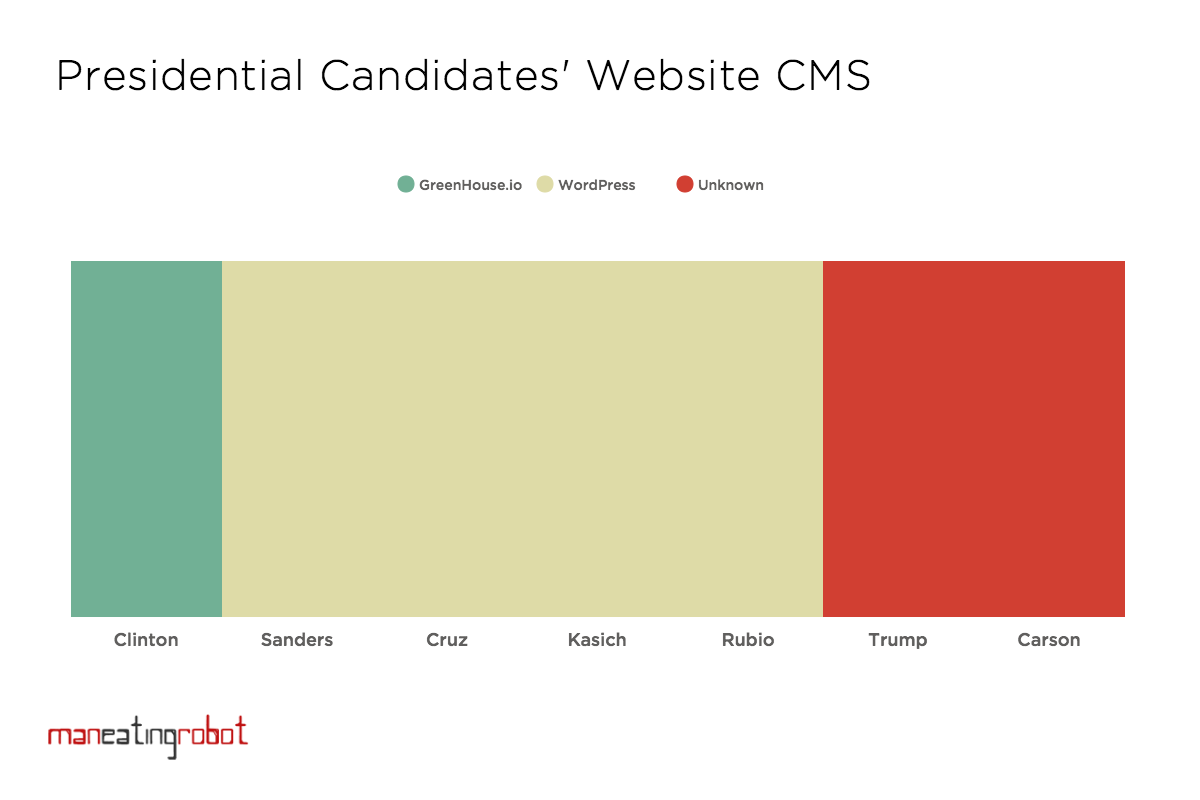 Interestingly, Clinton appears to use recruiting software as her content management system, repurposing GreenHouse as a whole CMS. It’s unclear what Carson and Trump are using to power their content, although source code indicates that Carson may be using HubSpot (marketing automation) for his content in addition to email marketing. It’s entirely possible that Trump’s website is powered by his hair. 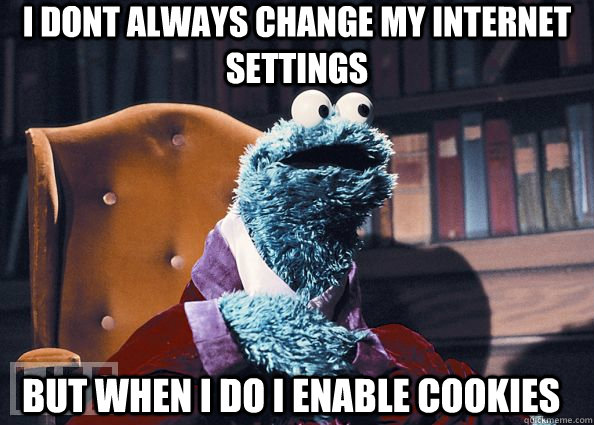 When you go to just about any website, your visit is tracked by the website’s owner. Sometimes that website will add a “cookie” to your web browser, which means the website will follow some of your activity around the web or remember you when you come back. This is why you’re often followed around the web with advertisements after you’ve visited HillaryClinton.com.

Here’s how many tracking technologies each candidate uses on you when you go to her or his website: 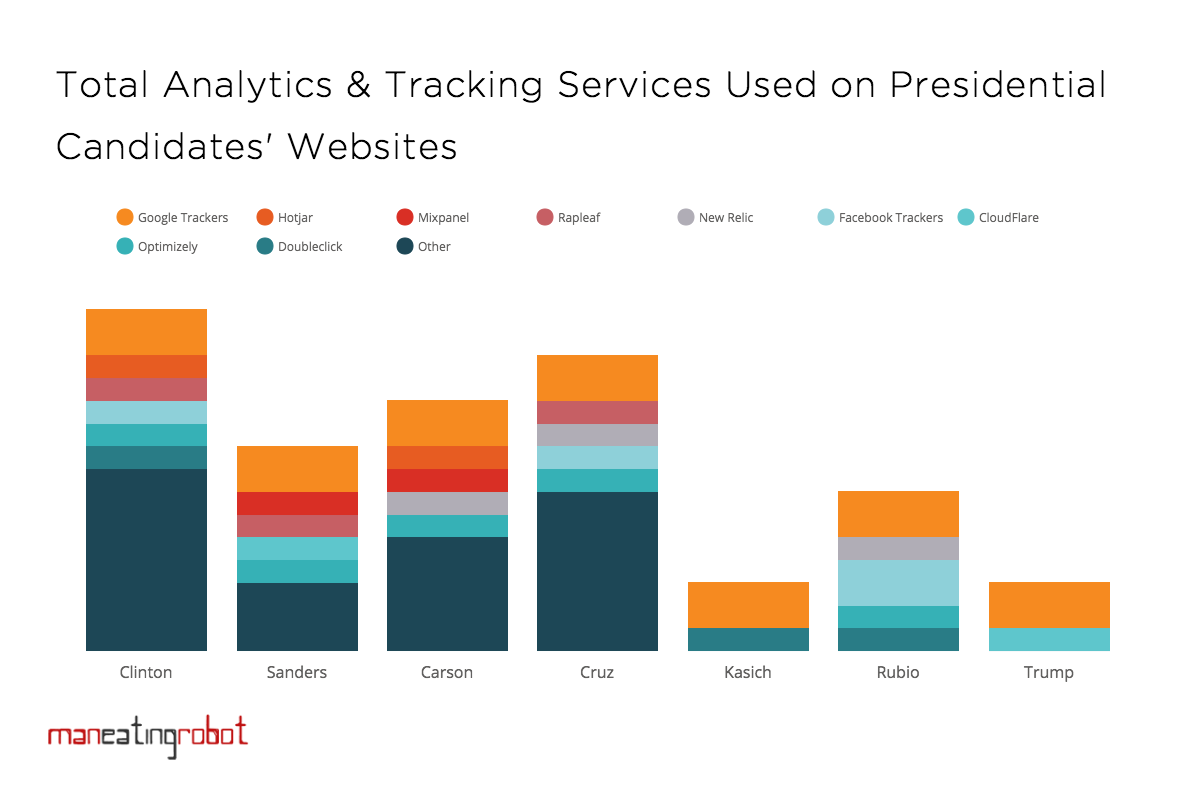 Clinton is tracking the most user data of any candidate, with a total of 14 analytics scripts running on her website. Every candidate uses Google tracking. Optimizely (split testing), Mixpanel (analytics insights and conversion tracking), and CloudFlare (who the hell knows?) are popular options as well.

Political candidates want to mobilize voters and donors, getting more people to support the cause—just as a consumer brand like Coca-Cola wants everyone to talk about Coke when they think about soda and buy Coke when they’re thirsty.

So in addition to tracking when you visit their sites, candidates want you to think about them as often as possible. They want to use you as a conduit to reach your friends too. Just like Coca-Cola, political candidates use tech tools to do this.

Here’s what each is using to manage user engagement: 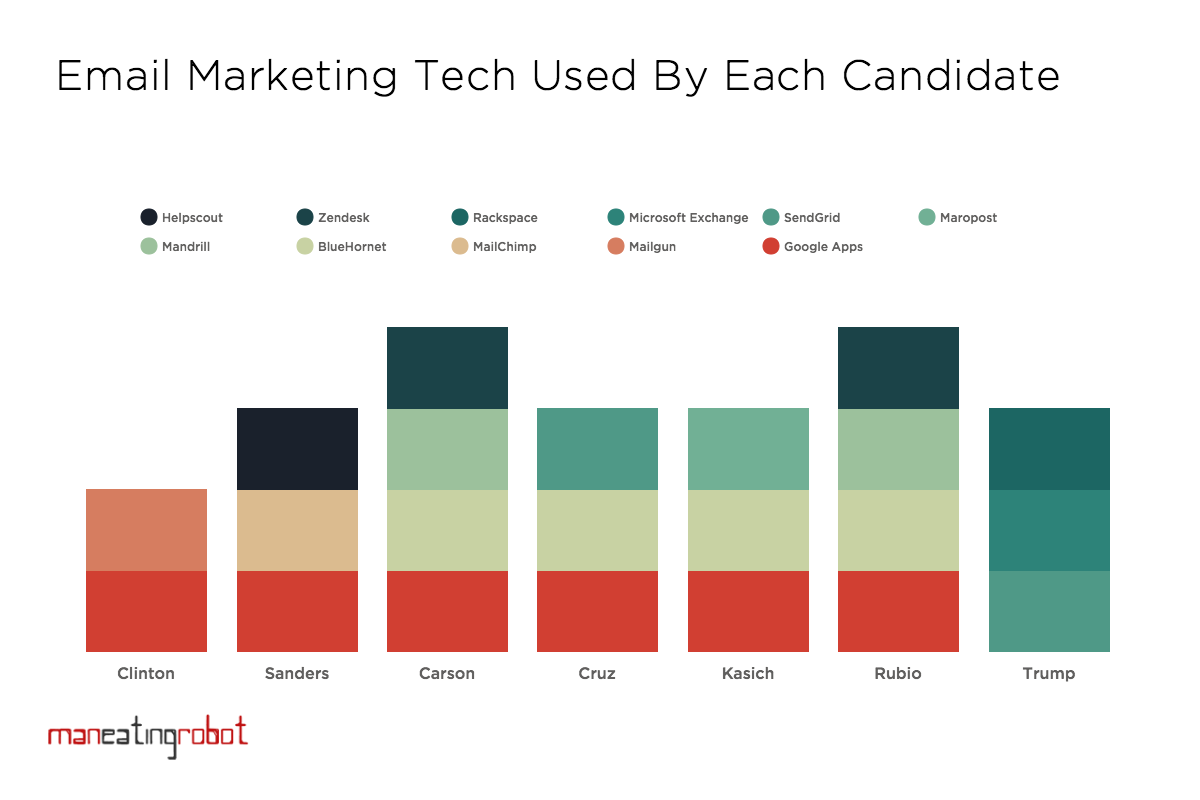 I couldn’t detect (with reasonable accuracy) which social media management system each campaign uses, but given the volume of social media activity the candidates are managing, we can be reasonably sure that each campaign is dropping $5,000 to $10,000 per month on a system like Sprinklr or Hootsuite or Tracx—with the exception of Mr. Trump, who is definitely managing all his accounts by hand.

I’m also going to guess that Sanders is using the populist’s SMMS, Buffer, run by his granddaughter.

Here are all of the advertising platforms each candidate has installed, according to data from BuiltWith: 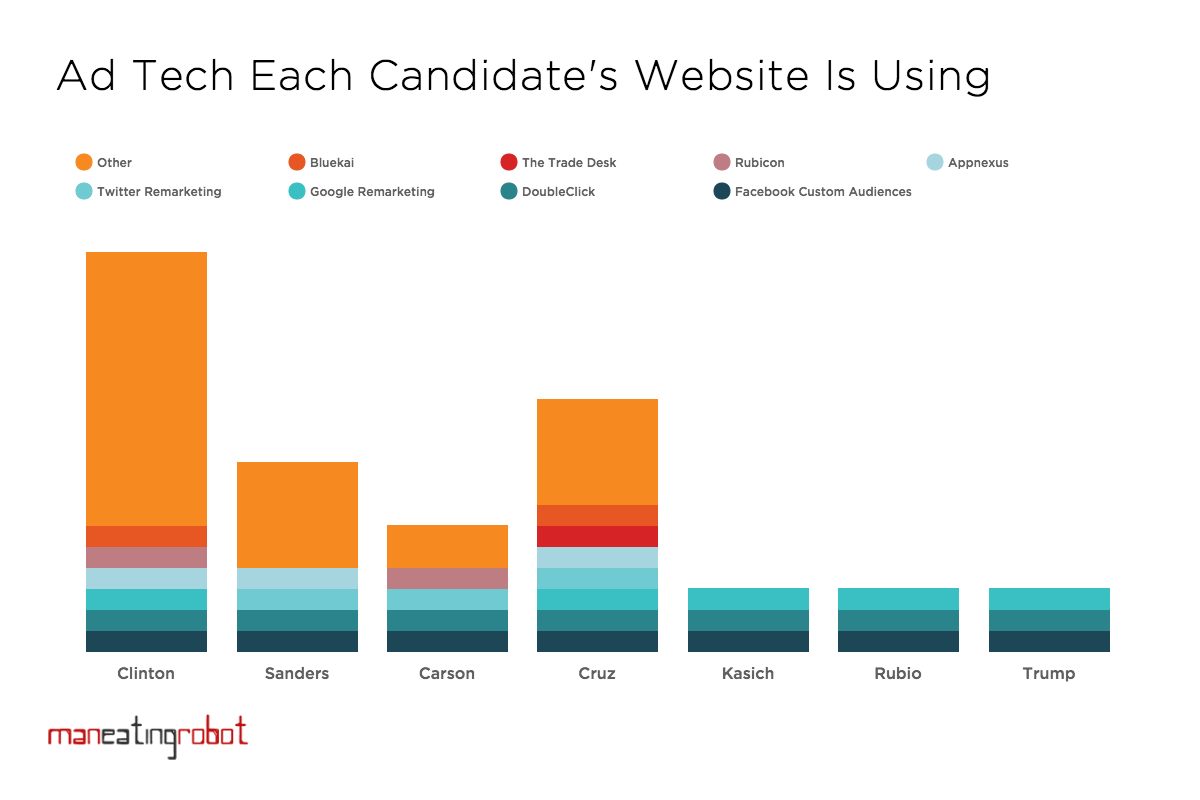 The chart above doesn’t account for the amount each candidate is spending on actual ads, just what software they’ve installed on their websites, which gives us an indication of the platforms they’re using. Carson famously declared that he was going all-in on Facebook advertising at the beginning of his campaign. Not a terrible call since most of America uses Facebook, where ads are cheap. Others, like Clinton and Cruz, have opted for a “blanket the airwaves” approach.

I went ahead and did some data digging on the digital influence that each candidate has right now. 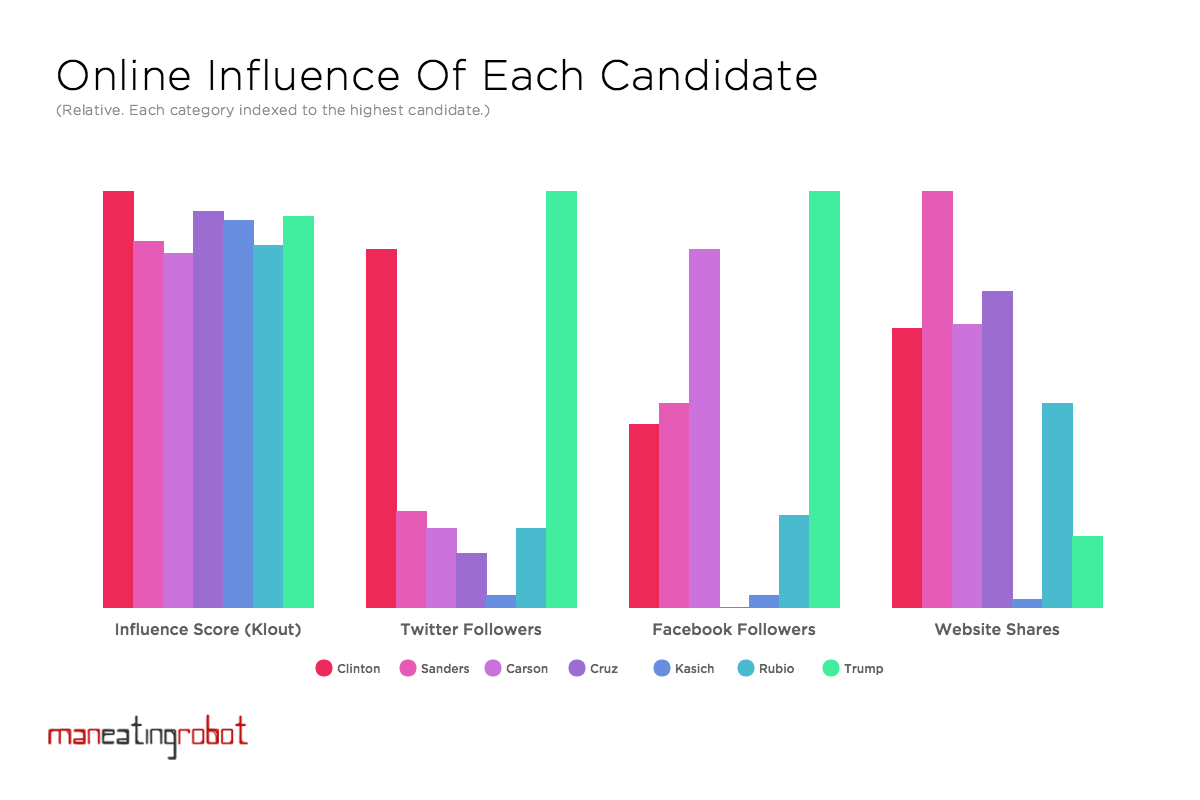 Clinton has slightly more “influence” than the rest (according to how people are responding to her online content and social media), though Trump has the most followers, and Sanders has the most shared material.

External factors can significantly affect a candidate’s digital influence as well, such as when a candidate says something Twitterworthy in a televised debate. Donald Trump practically gamed the entire primary election by saying so much insane stuff that he forced the media to give him free coverage, which the Internet happily spread.

Sometimes digital influence is weird or fickle, as I found in my recent analysis of how people perform more Google searches for “Donald Trump’s hair” than they do for “Marco Rubio.” Comparing influence to technology isn’t necessarily pointing to causal relations, but the correlations say interesting things about the different strategies that each candidate has decided to—or is able to—employ.

There’s one more thing we should mention. In pre-Internet days, politicians who had access to better voter databases via telephone or mail tended to have an advantage over competitors. The Internet afforded Obama, and now every candidate, richer ways to drill into that same kind of data, reaching people via email and targeting them through Internet advertising. These voter databases are gold mines, and technology to build them, reach them, and mine them has become increasingly prevalent in campaigns.

An advantage historically goes to the candidate who can collect and leverage the most proprietary data. Each candidate presumably has her or his own database of supporter information as well as access to the political party’s database.

What’s interesting here is not the actual database technology—which doesn’t appear to vary all that much—but the resources candidates put behind it. If you think of volunteers and field staff as little cookie collectors going door to door collecting data to plug into the larger database, the resources becomes a big deal for campaigns because the more money you put into analog data collection, the more powerful your technology will be.

Perhaps the lesson for the rest of us boils down to one of the most important concepts that data geeks talk about: Garbage in, garbage out. Your technology is only going to be as good as what you put into it. If you’re a content marketer with great tech but little content, you’re probably going to lose to the competitor with equal or even worse tech but amazing content.

I’m not saying that Trump’s content is amazing, but he’s fueling his relatively lightweight technology stack with highly original content (speeches, talking points, etc.) targeted at very specific groups—in his case, angry and checked-out voters. For better or worse, Trump’s content hits all the requirements for “shareability” that I write about here and has yielded big results compared to other candidates with boring content. Hillary, who’s polling the highest of all the candidates right now, has moved away from her historically polarizing approach to politics, so her use of technology (and big ad budgets) might just be what’s helping her stay in the conversation.

I won’t front like a clairvoyant and predict which candidate will win in the end. A lot is going to happen before election day. But I am comfortable saying right now that some of the biggest winners of this election—and probably many future elections—will be the software companies selling to everyone. In a war with many opponents and escalating weaponry, it pays to be an arms dealer.

Shane Snow is an award-winning journalist and co-founder of Contently. If you liked this post, subscribe to his blog, ManEatingRobot, via email, or get a free chapter of his bestselling book.