When we think of the publishers with the best social media performance, we typically imagine new media players like BuzzFeed and the Huffington Post, which not only understand how to best distribute content, but whose entire publishing strategies have been tailored from day one to maximize reach in an environment shaped by Web 2.0.

But when it comes to which publisher generates the most engagement on social media, you might be surprised to discover that the leading publisher was not founded in this century, let alone this decade, but rather all the way back in 1888. That’s National Geographic, if you’re keeping score at home.

According to a recent report from Shareablee, National Geographic actually had eight times as many social interactions during the first half of 2015 as BuzzFeed, the next closest publisher.

We decided to take a closer look to see how the nature-and-science mainstay is dominating the Internet. 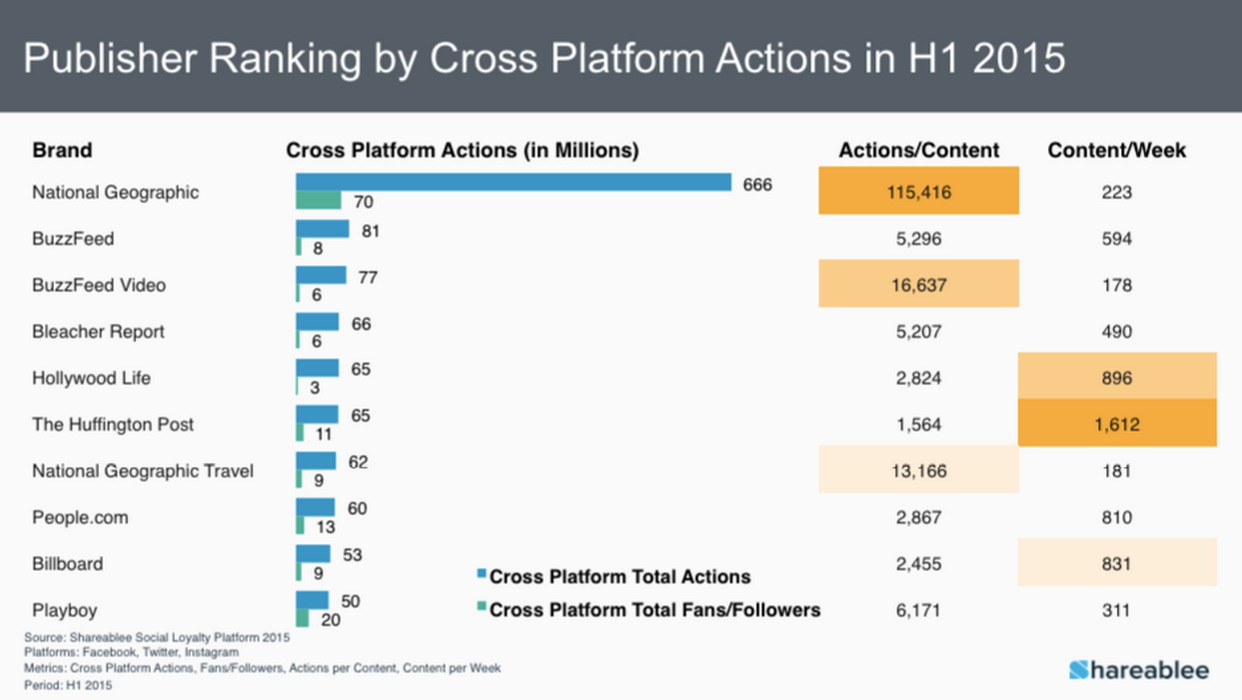 Playing to its strengths

It may seem obvious, but the biggest reason that National Geographic does so well on social media is because of the massive amount of great content it has to share. I’ve talked before about Business Insider CEO Henry Blodget’s theory that the web is a visual medium, and there really isn’t an organization better positioned to thrive in this environment than one with a century’s worth of stunning photography.

While it might seem like a waste of time to point out that National Geographic has good photographers, I do think its overwhelming social media success can be instructive. We spend a lot of time talking about targeting, scalability, and optimizing distribution spend, but at the end of the day, you can’t master any of those things without great content.

National Geographic and its editorial staff have spent a great deal of time and money building the expertise to produce quality content, and this investment has clearly paid off. The lesson here? Without experienced, talented people working hard to produce great content, you’re not going to succeed in today’s intensely competitive publishing ecosystem.

Photograph by @paulnicklen for @natgeo // How did this herd of horses survive the intense fires and heat of northern Washington State? When the owner of this ranch had to run from the flames, she said goodbye to her horses expecting that she may never see them again. But, she also knew that her horses, like all horses, are smart and if there was a chance, then they would survive. The day after the fire, she returned with her son and found the herd on this lake bed that allowed them a safe distance from the flames and heat. There was not a scratch or a burn mark on any of the horses. With @cristinamittermeier #follow me on @paulnicklen and @sea_legacy to learn more about the effects of human induced climate change. #gratitude #horse #beauty #love #smile #nature #persevere @natgeocreative @thephotosociety

Empowering its team to create

Tying in to the Web 2.0 theme, companies that want to be successful on social media have to encourage employees to create their own content without too much institutional oversight. This strategy is most visible on National Geographic‘s extraordinary Instagram feed, which boasts more than 30 million followers, making it one of the most popular accounts on the entire network.

The account is run by 110 National Geographic photographers and freelancers, all of whom have a password that allows them to post whenever they like. These photographers share images from the assignments they shoot, as well as from their daily lives, and use the captions to let readers in on the story behind the photos. In doing so, they build a sense of community with National Geographic‘s Instagram followers, who see the photos coming from talented individuals rather than a generic corporate account. As a result, users end up researching and following personal accounts for the photographers, maximizing the brand’s Instagram reach and leading to further engagement.

photo @lucalocatelliphoto every time I come back to Indonesia I never missed to travel around Bali. One amazing place is the central mountains where volcanoes and small villages are the only things you see. Here is a small family Hindu temple in front of the Gunung Batur, a particular active volcano with two calderas, one inside the other. The peak reach 1717 meters. The last big eruption was in 1963. At the feet of the volcano there's the lake Batur. #Bali #indonesia #travel #volcano @instituteartist follow me @lucalocatelliphoto

Understanding what audiences want on each platform

National Geographic‘s Facebook feed still features attractive preview photos, but all of the thumbnails have links that will bring users to its website or promote its cable TV network. The goal is to make the audience curious about science, and with titles like “Why Flashy Male Birds Aren’t What They Seem” and “How Not to Get Attacked by a Bear,” the Facebook posts do a great job of generating interest. 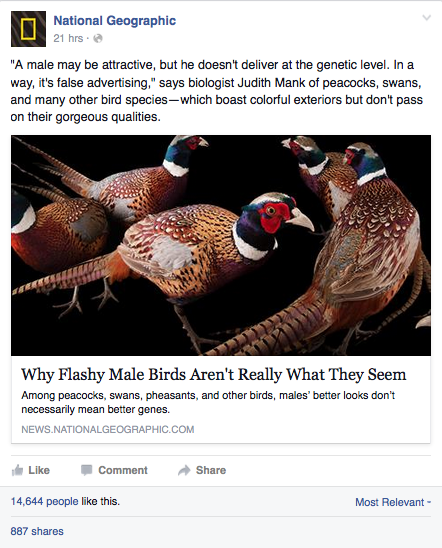 Though the National Geographic Twitter and Facebook feeds overlap, Twitter is used for more timely content that tends to be focused on teaching the reader something new. For example, instead of simply saying, “Here’s a photo of a seal riding a whale” (which, frankly, Dayenu), National Geographic‘s Twitter account links to a story that attempts to explain why seals keep riding whales in the wild. In case you’re curious, potential explanations include “Some seals have been trained to do this by humans for our amusement” and “The seal is latching onto the whale to feed on its blood.”

Even there, ads are minimally intrusive because they adhere to the same high standards that the publisher sets for its main feed. Take this photo, shot in partnership with Switzerland’s tourism department. It’s easy to see the appeal of content marketing when the content is this good.

Photo by @catherinekarnow Wow what a find! The Blausee hotel near Bern, a country house hotel where they raise organic trout and locally source all their food. An absolutely perfect get away, where, as they say, one night there feels like a week's vacation. It is that peaceful and bucolic. The grilled trout was exquisite. On assignment @natgeotravel in partnership with @MySwitzerland #Switzerland #SwissGrandTour

Even if it’s unlikely that your team is going to fly to Bali for a social media post, you can still think of National Geographic as a superb example of what you can accomplish with a smart approach to content that treats every potential user with intelligence. Newer publishers like BuzzFeed and the Huffington Post get a lot of hype, but National Geographic has had more than a century to perfect its image, and it seems to be doing just fine.