The central difficulty in calculating content marketing ROI is this: The easiest part to prove (direct revenue) is also the smallest piece of content’s value. It’s like the bullseye at the center of a dartboard, the tip of the iceberg, the low-hanging fruit, or any other tortured metaphor you’d like to use. It’s easy to see, but it’s only a piece of the story.

At Contently, we think of content’s value as a series of concentric rings, and we track ROI from the inside out. 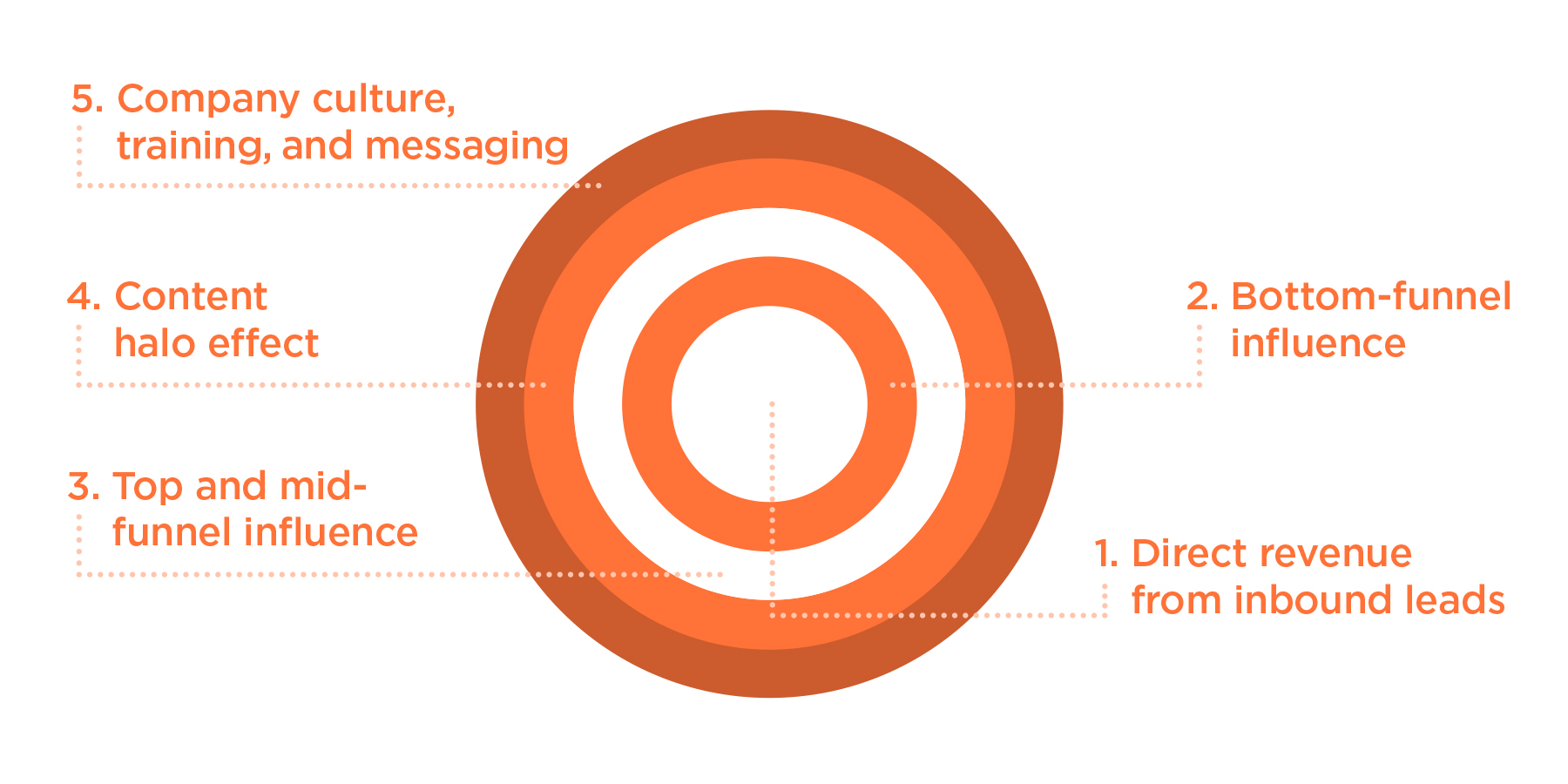 It starts with the center of the circle: direct revenue from inbound leads. We use Marketo to track people through the lead cycle; that way, we know exactly which stories they’ve read both before and after they become a lead. By using an attribution formula, tying it to our lead-to-close ratio and average deal size, and dividing it by our content spend, we’re able to determine direct ROI.

Just outside the bullseye is content’s influence on the bottom of the funnel, and on what we call “post-funnel”—current customers.

The bottom of the funnel are people who are seriously interested in buying Contently’s software. With these potential customers, we measure content’s influence on conversion rate, deal size, and time to close. We’ve found that people who read our content (whether on their own, because a salesperson sent it to them, or because they saw it in an ad) tend to convert at a higher rate, have a larger deal size, and close faster.

Closely related to this is client success, aka the post-funnel. Of our current client base, those who read our content regularly have a higher renewal rate, and create more stories than those who do not.

Next ring out we have the top and middle of the funnel—people who subscribe to our newsletter, regular visitors to our magazines, and social media followers. All of these people carry a true dollar value to the company. We tend to weigh email subscribers as the most valuable, followed by social followers and then readers—but every company will do this differently. For instance, a big B2C brand might weigh Facebook fans especially highly, whereas an ad-supported publisher will likely find more value in readers.

Getting further out from the bullseye (and deeper under the sea), we next look at content’s influence outside the funnel. This is what I like to call the halo effect (have I used enough metaphors for you yet?). A lot of influential marketers, including Seth Godin and Rand Fishkin, argue that this is where the lion’s share of content’s true value lies.

For instance, Contently recently found that people who read our content are 23 times more likely to trust us than our competitors, and five times more likely to recommend us to a friend. We also use a proprietary formula called ROCI, or return on content investment, that measures the amount we spend on content against the total value of the audience we attract. It’s not always easy to put a dollar value on trust, but there’s no denying that trust helps mightily in the sales process.

Finally, there’s content’s influence on our own company culture. We use content to train our sales team, to help freelance talent use Contently better, to recruit new employees, and even to boost morale through our investigative nonprofit. The bigger a company gets, the more important this becomes. For example, one of our clients is JPMorgan Chase—with an internal audience of over 200,000 people.

Hopefully this provides a useful framework for calculating ROI on your own content—feel free to swap in your own metaphors when sharing it around the office.