How the WSJ, HBR, and Other Top Print Publications Measure Digital Success in the BuzzFeed Era

Working on the Internet since the mid-’90s, I’ve watched empires built on pixels capture audiences that used to belong to print publications. The scale, immediacy, and reach of today’s leading digital players has dwarfed anything that could be achieved logistically for those who put ink to paper and physically transport it to readers.

But sheer scale isn’t everything, and those who write off the digital efforts of news brands with roots in print often miss the metrics that point to their success, specifically when it comes to engagement and conversion.

According to Sam Whitmore, the veteran behind the Sam Whitmore Media Survey, digital success is “diagonal to success as traditionally defined by the print business.” While digital-only winners have triumphed via mass attention and engagement on a scale beyond the reach of publishers that are rooted in print, the latter group can still claim victories in the content ecosystem.

For brands like The Wall Street Journal, The New York Times, or The Atlantic, digital success means attending to business goals (such as subscriptions or reaching targeted audiences) instead of trying to face off against the sheer traffic tonnage of Google, Facebook, or BuzzFeed.

Consider the Harvard Business Review, a 90-year-old print institution with a circulation of 260,000 and a focus on research-based business features. It’s arcane and not exactly sexy compared with the explicitly crowd-pleasing content on BuzzFeed—but on the web, it commands its own pocket of success.

Eric Hellweg, executive editor for HBR online, pointed to a recent NewsWhip study about news sites that initially seemed to give the nod to pure-play digital brands when it came to shares across Facebook, Twitter, and LinkedIn. “The original measure of data was just tonnage, and Mashable, Business Insider, and other digital brands came out on top for total numbers of shares,” he said. “But when they sliced the data to look at the number of shares for individual stories, content from HBR rose to the top across all platforms.”

When HBR went up against other business rivals, it dwarfed second-place Business Insider for average Facebook shares per story (405 to 147) and stomped runner-up Forbes for average tweets per story (724 to 163). 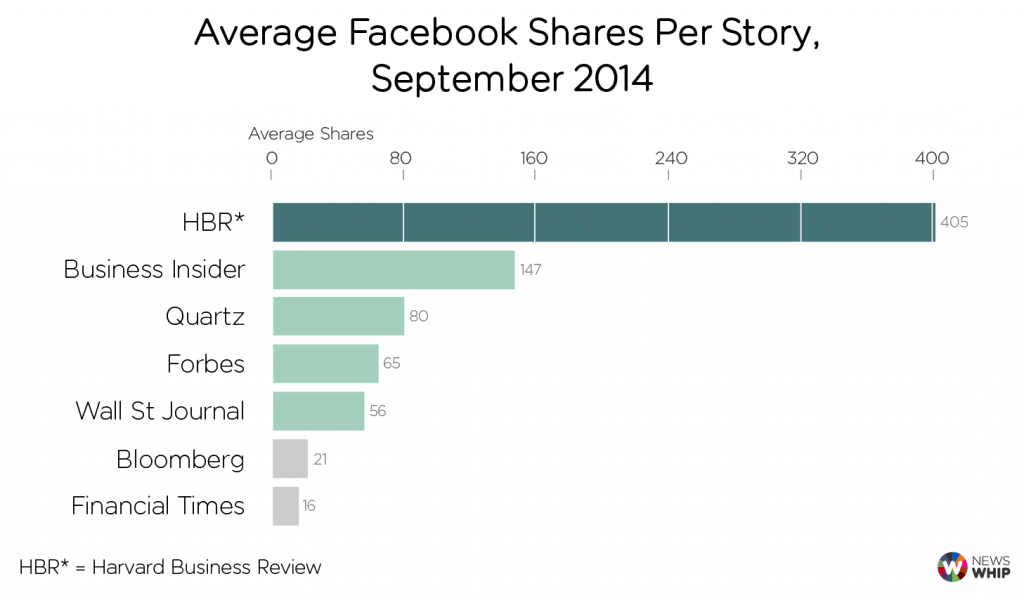 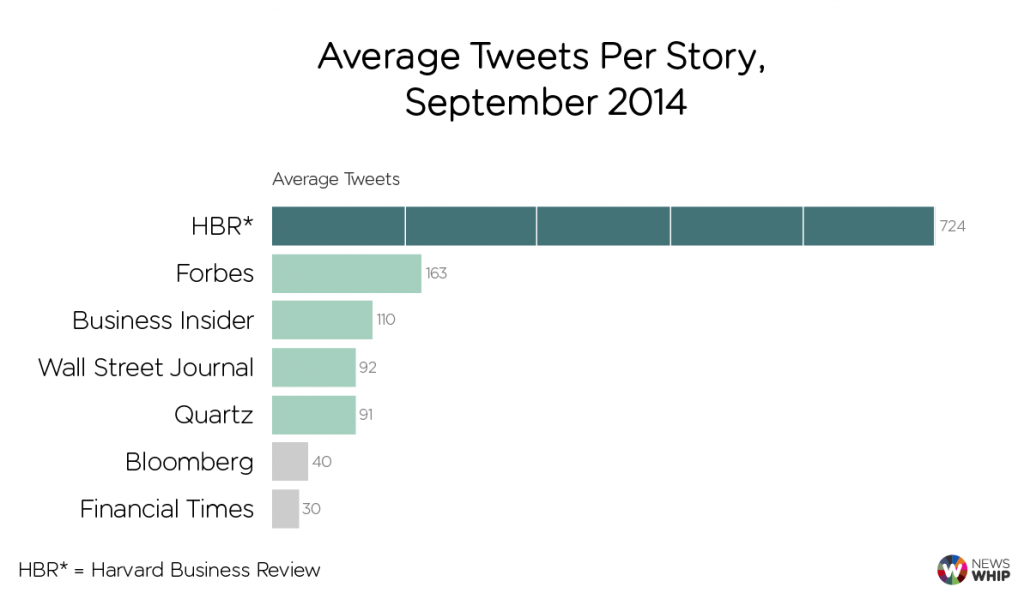 While HBR assuredly tracks its traffic, the subscription-based business is doing so on a different basis from digital brands that trade in volume. “We only do five to 10 pieces of content a day, while others are doing 100,” Hellweg said. “We’re more aggressively focused on interactions that are selective or transformative.”

Specifically, HBR has implemented benchmarking and assessment software from Forio that enables its authors to examine the degree of reader involvement their stories generate, as measured by responses and shares. Meanwhile, the site has also introduced a user-facing feature that allows authors to write questions directly to readers, thus enhancing the interaction between both.

“Stats influence our editorial direction, but not simply to drive traffic,” Hellweg added. “We can equip editors with much more information about who’s interested in their work. I see this data being more of an influence because traffic isn’t a primary factor to us. We’re interested in recurring engagement because we run on subscriptions.”

While HBR may be more of a niche print publication, it still has a lot in common with a major player like The Wall Street Journal when it comes to valuing digital success.

Raju Narisetti, senior vice president of strategy for News Corp., may be happy with The Wall Street Journal’s digital network (which he pegs at 70 million monthly visitors), but he doesn’t measure the company’s business success on sheer scale of pageviews or visitors.

“That doesn’t mean not focusing on top of the funnel,“ Narisetti said, “but conversion remains the fundamental success metric.”

Thanks to the WSJ subscription model, “empty calorie” metrics take a back seat to a focus on repeat visits, homepage metrics, subscriptions, advertising sell-through, and reducing churn.

With their focus on business and their roots in print, publications like HBR and WSJ will never play the same game as media channels that were built atop algorithms designed to create history’s largest funnel. But with more of a focus on the granular aspects of their audiences, these pubs that were once known for print can still have a digital footprint that leaves a lasting mark.