How Amex Raised the Bar for Longform Brand Storytelling

During the fall of 2013, Asheville, North Carolina, wasn’t home to any calamity, revolution, or major world event—yet American Express assigned a reporting team there to cover a single story for three months. Why? Because the credit card company made a serious commitment to longform storytelling. And more than a year later, this investment led to “The Journey,” a rich nonfiction multimedia project that chronicles the daily triumphs and trials of Buchi Kombucha, a brewing company specializing in kombucha, a type of fermented tea.

“The Journey“ is a prime example of what happens when a company executes its content marketing with an ambitious editorial mindset. Each of the story’s seven chapters contains high-quality photos of the founders, their staff, and the 180-acre property that holds their farm and brewery. There are three short video documentaries that intimately profile the Buchi team, and the written part totals over 10,000 words. To complement these components, there’s also a section devoted to journal entries from the founders, including daily ratings on a scale of one (very challenging) to 10 (perfect), written for each day during the three months they were being profiled. And to cap it all off, there are infographics illustrating the business’s highs and lows over that time period. 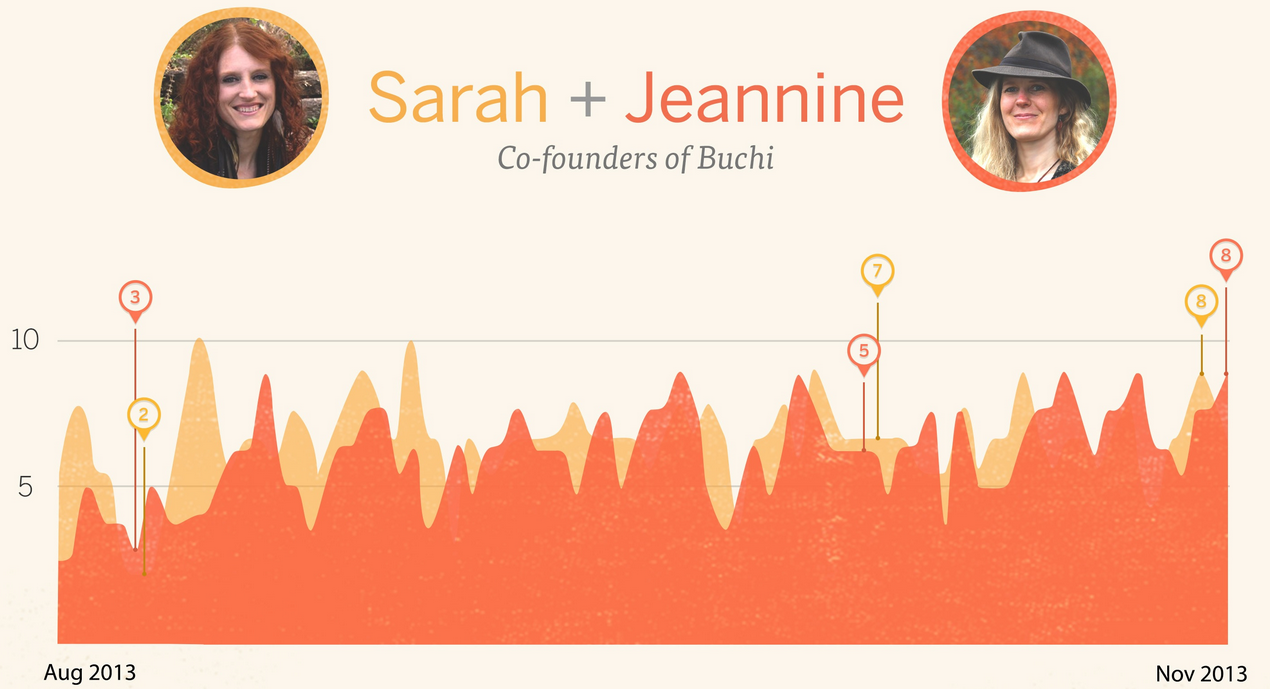 American Express is one of those rare companies that was already a brand publisher generations before “brand publishing” became a buzzword. Ever since the company started offering travel services in 1915, Amex has been publishing guides, booklets, magazines, and sponsored content for its audience.

When American Express launched OPEN Forum in 2007, small-business owners finally had a site dedicated to their needs. The site publishes blog posts, videos, and longform guides that help entrepreneurs make better business decisions, and it hosts a thriving community where readers can network, ask for advice, and share their own stories. Just recently the site has been redesigned to highlight four essential areas where small business owners need help the most: planning for growth, managing money, getting customers, and building their team.

This content-driven culture behind OPEN Forum makes it possible for Amex to experiment with richer content like “Local Business Stories,” a series of long, interactive narratives that cover small businesses making an impact in their respective communities. Along with their recent redesign, they’ve also launched “Growth Stories,” a new series that focuses on the emerging businesses and nonprofits that have found their home at Ponyride, a 30,000-square-foot building in Detroit’s Corktown area.

American Express hasn’t been the only brand in the last few years to seek out and share the stories of small-business owners in the U.S. In 2014, Ford Trucks underwrote This Built America, a 50-week documentary series profiling small businesses that are rebuilding communities across the country. And Basecamp, a Chicago-based software company, puts out an independent online magazine called The Distance that publishes one longform feature a month about a business that has been around for more than 25 years.

“The Journey” separates itself from these other storytelling endeavors with an unmatched level of in-depth reporting. Rather than covering several businesses, the project offers a glimpse into the daily life of a single business—an approach that requires an unusual amount of time and resources.

“What we wanted to do differently with ‘The Journey’ was to capture the story as it unfolded to get an unfiltered view of running a business,” said Courtney Colwell, director of OPEN Forum and content marketing at American Express.

The first step of that process was finding the right startup to profile. OPEN Forum wanted to search outside of hubs such as New York or Silicon Valley, since these places already receive adequate press coverage.

As Colwell put it: “We wanted to show that there are a lot of amazing, fast-growing businesses across the country, operating in a variety of industries.”

That’s how Amex landed on Asheville, North Carolina, an emerging entrepreneurial hub powered by local initiatives such as Venture Asheville, an entrepreneurship program from the Economic Development Coalition and the Asheville Area Chamber of Commerce.

The lead journalist of “The Journey,” Darren Dahl, lives in Asheville and covers the small-business beat for publications like Fast Company and The New York Times. Dahl helped OPEN Forum find local companies they could consider for the project, and eventually they settled on Buchi.

Amex realized that Buchi’s story of two female founders and mothers living and working in close proximity to each other would offer a unique look at how entrepreneurs balance personal and professional lives that are deeply intertwined.

“We were fortunate to find a company like Buchi that was gracious and, frankly, brave enough to open their doors and themselves to a reporting team and have them on site for so much time,” Colwell said. “Through this account, we get an objective inside view of a business at what turns out to be a fairly pivotal moment for their growth.”

Documenting this in real time meant one thing: American Express had no idea where the story would end up.

Going inside the machine

Given the scope of the story, Amex could’ve approached “The Journey” from a number of angles: covering it chronologically, organizing ideas by topic (such as hiring or sales), or focusing on a single interview subject. One idea the team initially committed to was publishing field reports to take snapshots of the narrative in real time. But the OPEN Forum team soon realized field reports were not enough. The story behind Buchi needed to be a focal point.

There was just one problem: The existing article templates on the OPEN Forum site were mostly static pages that wouldn’t have suited such an expansive story.

“We put design and development into building more immersive content templates and connected chapters to lead you through the story,“ Colwell said. As a result, the redesign of “The Journey” received a major upgrade full of smooth scrolling and multimedia treatments.

For example, the fifth chapter, “The Daily Grind“, opens with a full-width photo of two Buchi employees packing kombucha bottles. This photo fades out as the reader scrolls down to read the text. The rest of the page itself is simple, clean, only including the text, an infographic, and crucial pull-quotes. The overall design is responsive, making the story look stunning across different displays. And OPEN Forum members have access to another layer of interaction since they can follow the Buchi founders within the OPEN Forum community as they would on Twitter or Facebook.

This enhanced layout provided readers with a richer experience beyond what’s typically available from the OPEN Forum blog, but because of the additional time needed for developing the custom experience for “The Journey,” the publishing schedule was delayed by almost a year.

“As time passed, there were questions of whether it was now stale,” Colwell said. “We then realized there were a number of benefits to be had with additional time—a key one being that we could now end the story on ‘what happened since’ and share the results of those decisions made a year ago.”

As the story grew, AmEx learned how to adapt. The extra content that collected over time eventually became the final chapter, titled “Buchi Now,” which gives readers some closure to Buchi’s emotional story. The audience learns about Buchi’s new products, an 86 percent increase in sales, and even how a new investment in an expensive head brewer didn’t work out. The last chapter succeeds because it leaves readers wanting more, feeling connected and invested in how the business fares long-term.

“You don’t need to run a business, though, to appreciate ‘The Journey,'” Colwell said. “At its most basic, it’s a story about these authentic, entertaining characters, working together to achieve a dream. Like we say in the introduction, running a business is a series of ups and downs—financial, emotional, even physical. We hope it makes readers think of the journeys behind small businesses they encounter every day.”