For all of you struggling to maintain one brand blog with quality content, get ready to feel really insecure: HubSpot has three.

We often talk about brands becoming media companies, but HubSpot has taken that to another level. Late last year, they even acquired a competing blog, Agency Post. In December, they redesigned their blogs with a simple formatting that resembles Gawker Media’s style, and it’s hard not to think of them as Gawker’s incredibly dorky cousin obsessed with inbound marketing—the place you keep coming back to for quick hits of news and analysis. Over the years, content became the engine powering HubSpot toward an IPO that valued the company at nearly a billion dollars.

At the heart of it all is Joe Chernov, a man whose legend is built on two things: his thought leadership and his glorious beard. Chernov is a frequent contributor to the Content Marketing Institute and Mashable, and he won CMI’s “Content Marketer of the Year” award in 2012, when he was at Eloqua. Here he is with Joe Pulizzi after winning that award (and seemingly shotgunning seven Red Bulls with Pulizzi backstage). 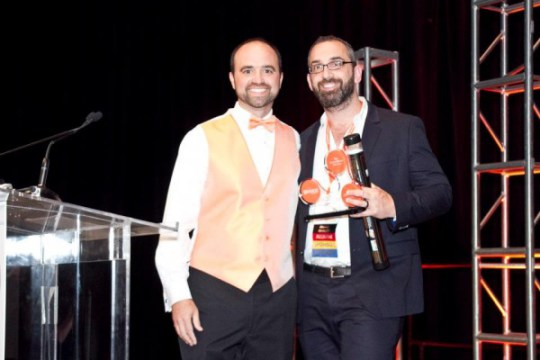 Recently, I emailed Chernov in an attempt to steal HubSpot’s secrets.

HubSpot has been making a really strong commitment to content marketing for the better part of a decade. Why has content continued to be such a priority?

Content is a prerequisite for inbound. I’ve joked that content is to inbound what the Arc Reactor is to Iron Man. Content drives search, search generates traffic, traffic yields readers, readers become leads, and leads fuel sales. Without content, that very fundamental process stalls. And, of course, not only is content vital to lead generation, but it also helps power lead nurturing, sales enablement, customer success, and even retention and advocacy.

How do you structure your editorial team and manage to produce so much awesome content? How much do you rely on freelancers vs. in-house folks?

First off, glad you think it’s awesome. Our marketing team is structured along the funnel. We have a pre-funnel team (brand and buzz), a top-of-funnel team (content), a conversions team (funnel), and a product team.

On the content side, we are basically split into two groups: shortform (our blog) and longform (our gated “offers” and podcast). There’s more innovation to come on the longform side. The blogging team is comprised of editors, writers, and an optimization pro. We use outsiders sparingly. We use our brand and buzz team for much of our creative work. If we go outside, it’s usually because of timing and bandwidth constraints.

We have worked with freelancers in the past, but the vast majority of our content is written by our internal team or our partners. It’s not that in-house is “better” than contractors, per se. Either model can work. HubSpot just believes in “owned resources” in the way that we believe in “owned media.”

One of the big emerging buzzwords in marketing of late is “owned audience”—as opposed to a rented audience through native ads. How big of an advantage is it for HubSpot to have a direct line to so many readers?

Yeah, exactly, this is what I was saying about the parallel between “owned resources” and “owned media”—or audience. Our CMO, Mike Volpe, has said, “We don’t like to build houses on other people’s land,” meaning it’s better to own the channel and content than just the content.

It’s taken the company a long time to build this asset, and it was a huge luxury for me to inherit when I joined a little over a year ago. But owning your audience comes with huge responsibilities—namely the need to “protect” that audience from marketing’s shadow. Our blog generated 2 million views in January. If we fell victim to the temptation to strip-mine that audience with overt promotions, we’d destroy the asset many people have worked so hard to build.

What about Inbound.org? How did you manage to build such an awesome community, and what advantages does it bring for HubSpot as a business?

I am not involved in Inbound.org other than as a participant. Come to think of it, I need to participate more! HubSpot is not only a company, but it’s also the catalyst of a movement. And as a community has coalesced around that movement, it’s our job to nurture and foster it. The advantage is an important, albeit indirect, one. It helps us maintain our position as the catalysts of the movement. But it’s not like we monetize Inbound.org to drive the top line.

Visits: We want to our blog to be an unassailable advantage for the company. The size of the readership is critical to that.

Leads: We are responsible for driving a sizable percentage of marketing-sourced leads.

Lead quality: To prevent us from filling the funnel with low-quality leads just to make our numbers—not that we’d do that!—we have a quality counterweight to our leads number.

On Inbound Hub, you’ve segmented your content into three big buckets—marketing, sales, and agency. How did you arrive at that segmentation? What advantages do you see?

I’m glad you’ve noticed this. This segmentation is very important to us. We used to have many more buckets—marketing, insiders, opinion, e-commerce, and a separate agency blog. But that nomenclature didn’t make sense to the outside world, so we consolidated.

We have three public-facing blogs: a marketing blog because we sell marketing software, a sales blog because we also sell sales software, and an agency blog because agencies are a vital channel for us. We designed the blog as we did—that is, in those three buckets—for several reasons, but one of the most important ones is that it helps expose the sales and agency blogs to our marketing readers, which constitutes the majority of our traffic.

Similarly, you guys have clients big and small. How do you create content that’ll drive a million-dollar enterprise deal and $10K SMB deal alike?

Personas are central to our marketing strategy. We spend a lot of time thinking about what each persona is interested in, is curious about, is struggling with, and we create content that we think lines up with those interests. When you get to the executive level, however, I think the tone, format and—most of all—expectations of content needs to change a bit. That’s something I’m focused on solving.

There’s a hint of Gawker/Kinja in the redesign of your blogs. Was that an inspiration at all?

Not overtly, but I can see why you said it. Our blog and theirs are both designed to achieve the same objective—”recirculating traffic” through their properties. Honestly, the biggest inspiration for me was Quartz, which went ahead and redesigned their blog while we were about a quarter of the way into our project.

What advice would you give companies that are trying to follow in HubSpot’s footsteps and build an awesome publication that’s read by millions of people?

Be patient. A readership is the byproduct of consistency. They say in Hollywood, talent will eventually be discovered. It’s not if but when. If you stay at it long enough, you will build a community.