Dr Pepper Hops on a Hot Digital Trend: Turning GIFs Into the New Emojis of Messaging

Woo. Oh boy. Sorry… Give me a second to recover from that GIF. So many questions are left unanswered here: How quickly was he able to get to a shower? How nasty does your hair feel after getting soaked with Dr Pepper? Why didn’t ESPN cut away faster? Was this all just an ingenious guerrilla marketing stunt? Considering the hilarity, does it even matter?

You’re probably wondering where I’m going with this. First off, I want to make the point that GIFs are a wonderful thing. I laugh harder at this with every loop. Watch the anchors’ faces as it cuts away: You can see their confusion and disgust as they see what’s transpiring behind them on the monitors, the sudden realization that they’ve just become bystanders of a sure-fire meme.

Secondly, I wanted to show that a brand can play a central role in a viral GIF—as long as that GIF is done right.

With the release of iOS 8’s customizable keyboard feature, GIFs may soon become even more prevalent in our daily communication. Apps like PopKey are using the feature to make sending GIFs via iMessage as easy as sending Emojis, thanks to a keyboard full of commonly used GIFs and favorites you can upload yourself.

PopKey has had a few problems so far, with most complaints targeted at being forced to share personal information to the app and the PopKey watermark on every GIF, but it’s likely that GIF messaging is going to be extremely popular once more people adopt the iPhone 6 and iOS 8.

So far, Dr Pepper, in a partnership brokered by Code and Theory, is the first brand to jump on board with branded GIFs as PopKey’s first advertiser. Their GIFs will show up in the “Featured” section of the main menu of the keyboard, giving them a leg up on association with an app whose popularity seems destined to increase. 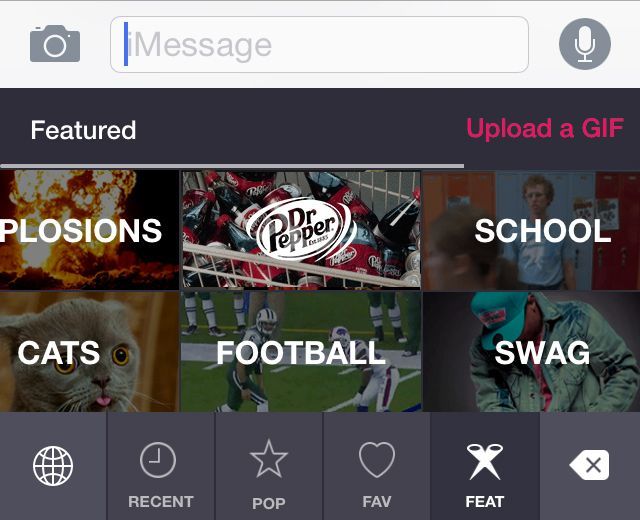 Dr Pepper’s early adoption of GIF messaging makes sense: GIFs are an excellent way to reach millennials, and Dr Pepper, known for associating themselves with the digital generation, wants to be trendsetters. According to Sharon Leath, the director of integrated marketing content at Dr Pepper Snapple Group, “The keyboard is sort of a ‘holy grail,’ as it allows us the opportunity to be a part of one-to-one conversations between friends.”

While this is certainly true, it’s difficult to see the Dr Pepper-branded GIFs being used in the flow of normal conversation, as they’re so overtly product focused. Let’s check out a few examples:

While the third one (“Skillz”) could have some potential to be used regularly, it’s hard to imagine anyone but the biggest Dr Pepper fans using these to express themselves… though that seems to be who Dr Pepper is targeting. Leath said that they’re experimenting with PopKey to “enable our fans to share their love for the brand in creative ways.”

That’s all well and good, but the potential for branded Dr Pepper GIFs on PopKey just seems so much greater. As our shirtless Dr Pepper fan above demonstrates, it is possible to create GIFs that are so good that people want to share them despite a brand presence. PopKey is about to collect a treasure trove of data about which GIFs people like using the most, and that has the potential to inform a brilliant next round of Dr Pepper-branded GIFs (which will hopefully include a little less Dr Pepper).