What U2 and Beyoncé Can Teach Us About Audience Engagement

I remember the first time I was bitten by the Apple bug—that first time I really had to get my hands on a product because it was so cool. It was about a decade ago, back when Apple introduced mobile music to the masses with that beautiful commercial with U2 singing “Vertigo,” the bandmates’ silhouettes rocking out against neon backdrops.

When I eventually got my first iPod, I decided to christen it with the only song that would be appropriate: U2’s “Vertigo.” Obviously, the ad worked. Not only did I buy the product, but I bought the song that sold it. Why? Because the commercial was just so enticing!

U2 is back in cahoots with Apple, having closed out the tech company’s big livestream last week with the announcement that their new album, “Songs of Innocence,” would be available for free for all iTunes users. But there was one big problem. When Bono said Apple was “offering” the new album, he really meant that Apple had forcibly added the album to 500 million users’ music libraries through iCloud.

Now. Let me bring in my girl Bey to teach you a little something.

There are good ways to do a surprise product launch, and there are bad ways. Beyoncé did it right during that fateful midnight hour of last December, when her album (and 17 corresponding music videos) dropped on iTunes with a sound that could make a pin jealous. Without warning, Beyoncé’s Beyoncé was released unto the world, proving that, for world-class superstars like Bey, no promotion strategy may be the new promotion strategy. 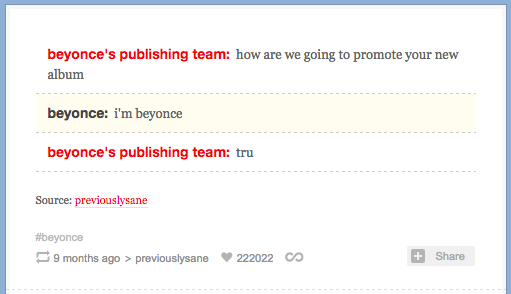 World-class rock stars themselves, U2 thought they could one-up the queen with the release of their new album almost a year later. But for U2’s launch, the “surprise” was annoyingly invasive: Users couldn’t remove the unsolicited tunes, even if they wanted to.

I’m confused, by definition is iTunes or the U2 record classified as malware?

Content marketing is supposed to be all about a rejection of intrusive advertising, and an embrace of custom experiences that a user chooses to consume. I hope that this unsolicited “gifting” of free content is not the future of the industry. Otherwise, as consumers, we’re reduced to just numbers—involuntary receivers of information who don’t really have a say in the matter.

Audience engagement isn’t about telling your consumers what they want; it’s about offering it to them in an intriguing way and letting them take the bait. Free stuff is nice, but just because it’s free doesn’t mean we’re going to want it. The physics of audience engagement—that classic push and pull—doesn’t work if you take away the pull.

With all the backlash, Apple found itself in the awkward position of creating a new feature built entirely for the purpose of removing the unwanted U2 album. It had to arm users with the tool to reverse its own campaign. Now if you Google “U2 new album,” you get articles about how to delete the band’s content from your library. Talk about poor brand perception.

Still, this is all just a messy situation that teaches a simple lesson: Tell your consumers why they should love you, not that they should.

How else can I say it?

U2 got up at 4 a.m. to primp and preen, but Beyoncé—she woke up like this.