How can I attract the Hispanic demo in the U.S.? Brands across the nation are asking themselves this question—and they should. With a population of over 50 million and a buying power of over $1 trillion, Hispanics are a coveted—and growing—audience for marketers to target.

Yet, thinking you can attract the whole Hispanic population with a one-size-fits-all strategy is a big mistake. Hispanics make up a diverse demographic that constitutes people from different countries speaking different languages, and trust me—we don’t like to be generalized. Thirteen percent of online users in the U.S. are Hispanic, according to comScore, making digital a prime space for building relationships with Hispanics—as long as your content is on point. Here are five tips to keep in mind:

1. It’s not about speaking English or Spanish—it’s about knowing Spanglish

The language you choose will attract different types of Hispanic people. When I hear a Spanish advertisement on Pandora, I listen more attentively. Listening to my native language captures my attention more effectively. But not all Hispanics speak Spanish. The Pew Hispanic Center survey showed that just 38 percent of Hispanic adults are Spanish-language dominant, while another 38 percent are bilingual and the rest, 24 percent, speak English as their primary language. Naturally, first generation Hispanics speak more Spanish, while second and third generations tend to be bilingual or speak more English.

Translating your English ads and content into Spanish or vice versa is not enough. Brands need to understand users and the way they speak. What does this mean? You might want to hire some bilingual writers who are familiar with not only the language but also the culture. Ultimately, high-quality content transcends language.

A video that really embraced Hispanic’s bilingualism is AT&T’s “The Mobile Movement Presents: #BetweenTwoWorlds.” The mini doc shows Hispanics from many different countries speaking in Spanish and English about bilingualism and their culture.

When I talk about my family, I don’t only talk about my parents and siblings; I’m referring to my aunts, uncles, cousins, my cousin’s kids and the neighbors who became family. Marketing strategies in the U.S. tend to focus on the individual; however, Hispanics generally have strong family and community values, and branded content should appeal to those values.

Last year, Wendy’s launched a campaign, primarily in Spanish, that introduced the Rojos family, a couple with three kids and a dog that frequent the fast food chain often. “Hispanic consumers as a group are growing in purchasing power and influence,” Wendy’s CMO Craig Bohner told Ad Age, “and we need to build the brand with them.”

Some of the commercials are all in Spanish while others, such as the one below, are in Spanish and English. Bohner explained that the campaign was meant to play into how the Hispanic consumer “lives in two worlds”—not surprisingly, a similar theme as the AT&T video above.

Hispanics don’t want to feel that you’re selling to them; they want to know you understand them and care for them. “Brands need to find new ways to engage with Hispanics,” Monica Gil, senior VP of Public Affairs and Government Relations at Nielsen, told Forbes. “It’s time for companies to understand the behaviors that drive Latinos to connect emotionally with their brands. Until they do, they are leaving revenue and market growth opportunities on the table.”

Let us be part of the conversation! Engaging Hispanics is now easier than ever thanks to social media. According to Ad Age, Hispanics are more likely to download apps, chat, stream video, listen to music and play games than non-Hispanics. In fact, the Association of National Advertisers (ANA) reported that 40 percent of Hispanics create content and share their opinions online, but brands haven’t figured out a creative way to be part of this sharing process. “The challenge is to support consumers, provide resources, and even become part of the process, without imposing artificial restrictions or values.”

4. Reach us by móvil

Everything is going mobile and Hispanics are not behind the trend. In fact, they’re ahead of it.

According to Nielsen’s “State of the Hispanic Consumer,” 60 percent of Latino households own at least one video—and Internet—enabled cell phone, compared to 43 percent of the general market. And it doesn’t stop there. PwC’s report “Mi Móvil: Hispanic consumers embrace mobile technology” (a must-read if you want to target Hispanics via mobile), found that Hispanic respondents were more likely to check their bank balance, make a bank transaction, or pay bills through their mobile device. Other studies also show that Hispanics, especially Hispanic millennials, are more likely to use their smartphones while watching TV.

5. Double down on video

If you were wondering if you should go through with that video campaign, consider this: Monthly, Hispanics spend 68 percent more time than whites watching video on the Internet and 20 percent more time watching video on their mobile devices, Nielsen reports. ComScore reports that Google sites (mostly YouTube) lead the Hispanic video consumption, with 22 million unique viewers watching over 2 billion videos a month, while Facebook comes in second with over 9 million viewers watching over 162 million videos every month. 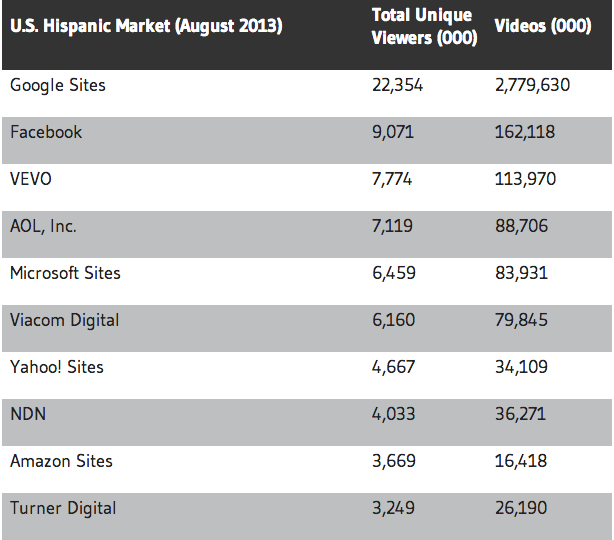 To give a more concrete example, in “Your Next Big Opportunity: The U.S. Hispanic Market,” Google VP of Americas Marketing Lisa Gevelber stated how the bilingual multi-channel MiTú has grown to a loyal audience of 36 million in two years. “That’s already one-third the number of subscribers to HBO, a network that’s been around for over 40 years,” she said.