Who is Red Bull, really?

Among the existential questions that plague humanity, maybe this one is not as high on philosophers’ radar. But for those interested in the state and future of branded content, it’s one worth asking.

Perhaps nothing helps shape the answer to the question of who Red Bull is right now more than the release of a new app, RedBull.com, and the update of another, Red Bull TV, which seem to showcase the company’s identity—as it stands today, anyhow. 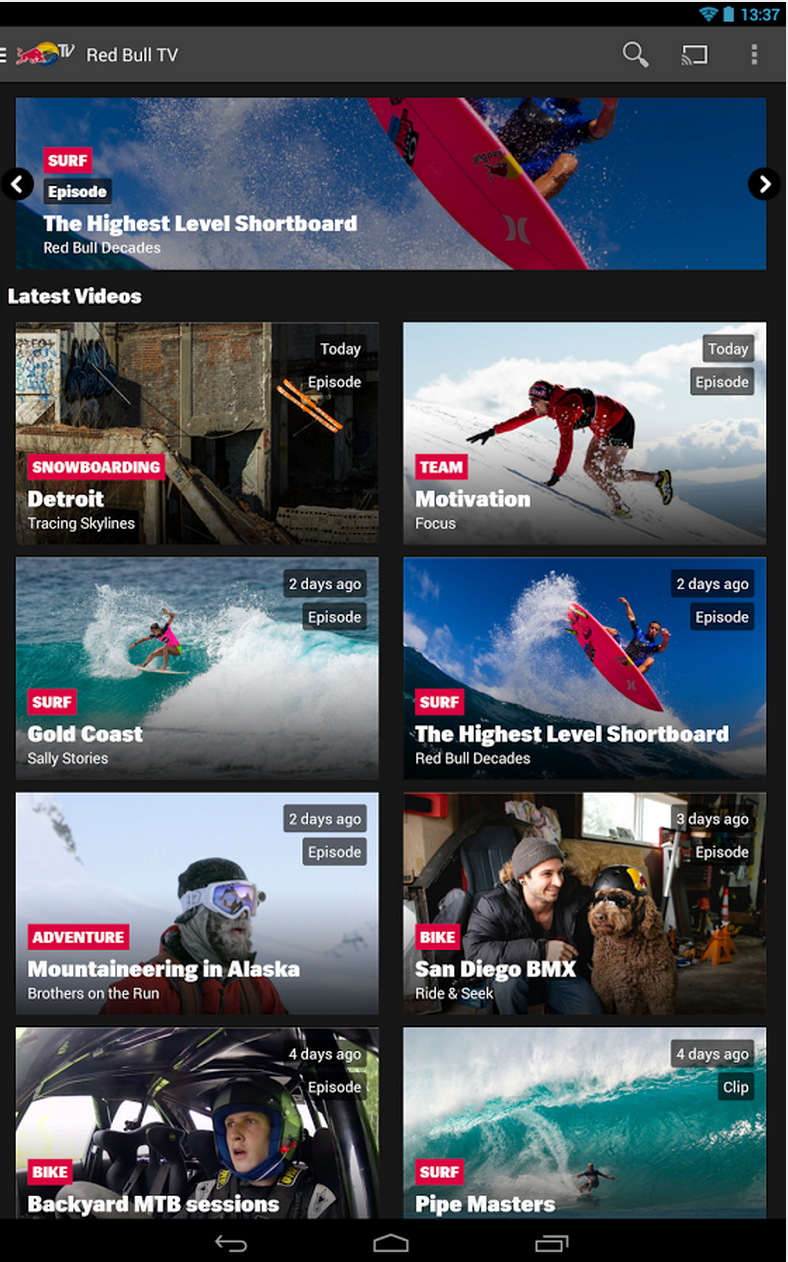 According to Gordon Plutsky, VP of Marketing at Digital Bungalow, what Red Bull is doing is in some ways classic content marketing, but taken to the highest degree seen thus far.

“They know their target audience, and they know what appeals to them, which is action sports,” Plutsky says. “They’ve attached themselves to it, and are speaking to that audience in the language and the formats that they’re used to, which is completely digital. It’s video and it’s mobile.”

The new RedBull.com app acts like a mobile reader featuring original content—primarily text-based, but sometimes with embedded video—that covers action sports, music, e-sports, and general lifestyle stories. Red Bull TV, which originally launched years ago, now features full video coverage of the recent Lollapalooza music festival, along with streaming live sporting events and an arsenal of original series, like “Who is JOB?,” some of which are into their third seasons.

Who’s been watching three seasons worth of TV shows that haven’t been on TV? Perhaps Netflix and Hulu Plus have made the answer to that question obvious: millennial cord-cutters, aka a good deal of Red Bull’s target audience.

Should ESPN be worried?

Red Bull owns the conversation about action sports, and that conversation is now happening on both mobile and on TV screens, with Red Bull TV’s Chromecast integration, the RedBull.com app’s Apple AirPlay integration, and a Red Bull channel available on Apple TV. Does this make Red Bull officially a sports media company? Has their primary competitor changed from Monster to ESPN?

“It will be interesting to see where this will go,” Levy says. “The original impetus in doing all this for Red Bull was just a marketing angle, but as this develops for them… If I was ESPN, they would definitely be on my radar.”

And they probably should be. Because while Red Bull’s main objective may still be to sell energy drinks, Red Bull Media House is its own entity, licensing its own content and offering other brands partnership opportunities. That doesn’t sound like content marketing. That sounds like creating revenue from content—which is what media companies do. And according to an industry contact of Levy’s, they’re already doing that successfully enough that Red Bull Media House is a viable as a standalone company.

Does that mean they’ll be appearing in cable listings along with ESPN and other networks? Plutsky doesn’t think so—not necessarily because they couldn’t, but because they don’t need to undertake such a massive expense to reach their audience.

“Why do that, when you can do it through the internet and mobile channels without having to go through the cable hierarchy?” he says. “I think their play is online and through mobile because they really own that media channel.”

The success of Red Bull Media House begs another existential question: What is branded content? Apparently, it doesn’t just have to be a marketing expense. It can also be a massive revenue source.

“It’s a best-case scenario,” Levy says. “I don’t think every brand will have the appetite to go as far as Red Bull did. But clearly the return can be exponential in success.”

Perhaps the question of who Red Bull is can’t be answered quite yet. Right now, it’s both a media company and a beverage company, but above all, it’s a company that’s comfortable breaking boundaries.

“I think it’s an indication that Red Bull intends to continue to evolve into a multi-faceted lifestyle consumer brand,” Levy says, “with its tentacles growing well beyond the original energy drink business.”