Is It Good Enough That People Trust Sponsored Content More Than Fox News and BuzzFeed?

Thanks to Robin Thicke, I despise the phrase “blurred lines.” That’s bad news for me, because it’s the analogy that pundits keep using when talking about one of my industry’s biggest trends right now: brands as publishers.

But brand publishing is actually quite straightforward for the most part—corporations have been publishing magazines for 120 years and making cartoons based on their toys for 50—and in most cases we have no misunderstanding about who’s behind the The LEGO Movie or The Red Bulletin.

The blurriness comes in, however, with a hybrid model that’s becoming popular among newspapers, magazines, and blogs: sponsored content. It’s a new form of advertising where the ads are replaced by stories in which the advertiser hopes to align itself with a value or idea. 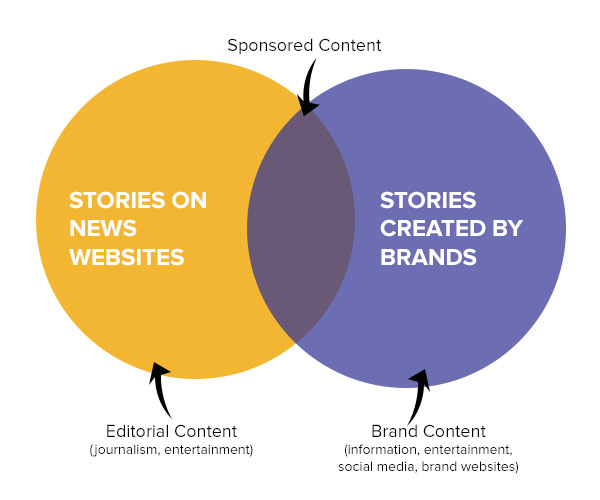 Media companies have realized that readers are much more inclined to click on a sponsored story than an actual ad, and, to my delight, it’s helping those companies stay afloat and it’s providing well-paying work for talented journalists who as a group are in a tight economic spot.

The marketing world loves this stuff. But how do everyday people feel about it?

My company, Contently, has a somewhat vested interest in the answer to this question. We build technology and provide freelance talent for brands that want to become publishers. Most of our clients are building their own branded websites, like American Express’ OPEN Forum (a news site for small business owners, whose stories readers understand clearly comes from a brand and like it anyway!). But a subset of our customers are media companies that need tech and talent to scale sponsored content programs. 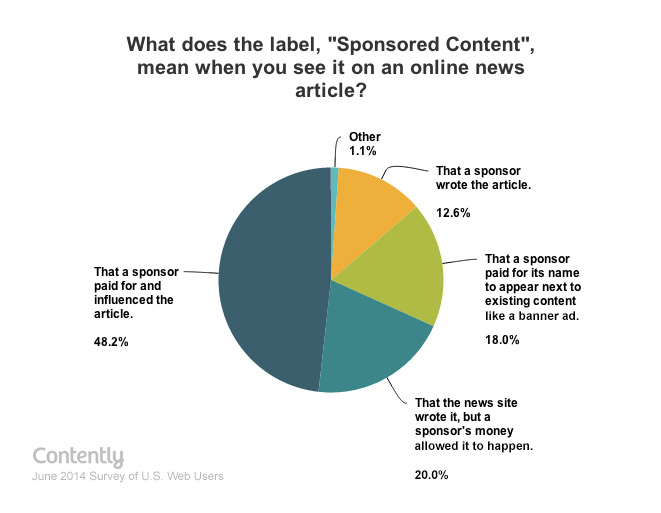 If that doesn’t put the chorus from “Blurred Lines” in your head, I don’t know what will. Perhaps the most worrisome statistic is the one that comes after: 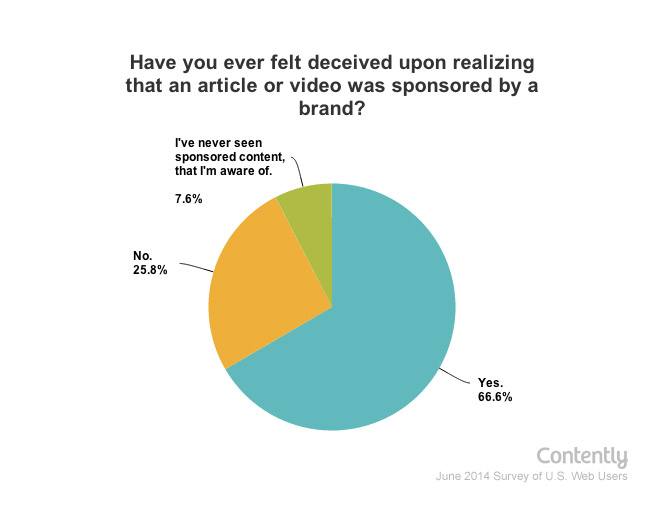 Most people feel like they’ve been tricked at some point by advertiser content. They thought a story was by a publication they know and trust and then suddenly found out it came from an advertiser instead. This chart triggered a few headlines yesterday about the content marketing industry being doomed, etc. Fortunately for media companies and advertisers, that’s a hasty generalization.

The next two charts illustrate why: 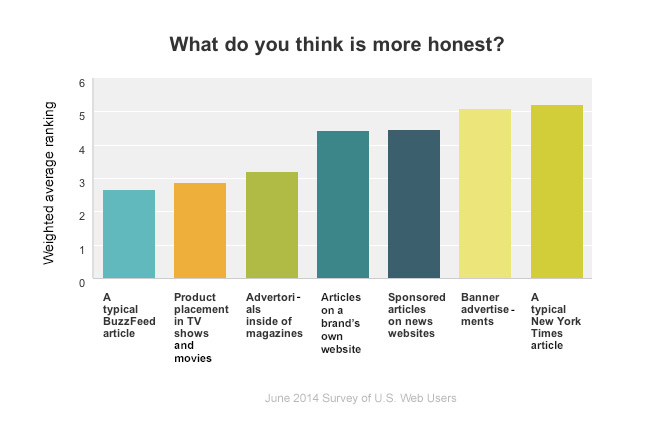 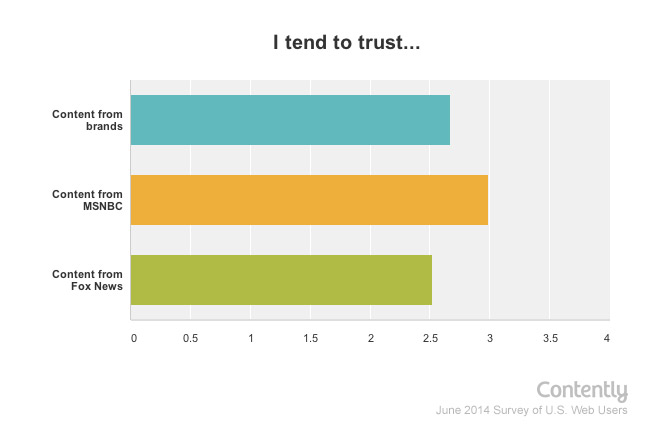 It turns out that people think sponsored content is more honest than a lot of “editorial” content. The reason for that, I suspect, is because news itself often is viewed skeptically, and the Internet itself has a trust problem. This week, footage of the 16-year-old Vine star Nash Grier shouting inaccurate information (and a slur) about AIDS to his 8 million social media fans caused a huge stir. BuzzFeed pumps out hundreds of quizzes and thousands of listicles filled with cribbed photos from random parts of the web, and the result is that despite the excellent reporting and real journalism taking place in the back of BuzzFeed’s office, people think it’s less trustworthy than advertising.

Cable TV has a trust problem, too. Fox News ranks lower in trust than sponsored content, and MSNBC barely squeaks ahead of it. The reason is likely the same: In an instant-gratification, high-demand, always-be-publishing world, errors and biases and flaws creep in on a regular enough basis that people feel betrayed and skeptical of any source. (And news organizations that advocate for a particular ideology or cause actually share a lot in common with brand publishers; they both have the goal of winning people over to a specific “brand.” Clearly, people are skeptical of this, unless they already lean a bit in the direction the publisher wants them to lean.)

So where does this get us? First of all, it means that sponsors and media companies shouldn’t panic. People have always disliked ads, but at the same time there have always been ads that people love. (Many of us watch the Super Bowl for the ads.) And people are cynical about the honesty of content that’s put in front of them across the board, not just from sponsors.

Contrary to what some may say, this actually presents a huge opportunity to make the web a better place for media companies, advertisers, and readers. To capture it, we need to think about the following:

What media companies can do:

(I should note that a few media companies already do a good job of this. But the stats show that not enough do.)

What brands can do:

What readers can do:

Imagine how much better the web would be if there were no pop-ups, no banner ads, no interstitials that make you click “next” before you get to the video you wanted? Imagine if instead of commercials asking us to “buy now,” we had just more great shows, created by brands we loved? I, for one, would way rather read a magazine about science published by Tesla, or watch a drama created by Starbucks, than have to click “X” on ads blocking me from seeing something I want.

If brands, sponsors, and media alike focus on telling great stories—and not deceiving people in the process—we could make the Internet a better place, and a whole lot of businesses will be a whole lot more successful.