It’s that time of the year. No, not beach season, but the release of Mary Meeker’s annual Internet Report, that monumental moment when we find out what the esteemed analyst thinks about the state of technology and the Internet. It’s one of the biggest annual events in the tech and marketing industries, and possibly one of the only good reasons to put away the sunscreen and hunker down indoors this weekend.

But we want you to have a good time, so we went through the report and found the five nuggets you need to know.

1. Industries are being thrown upside down by the Internet Trifecta: Content + Community + Commerce 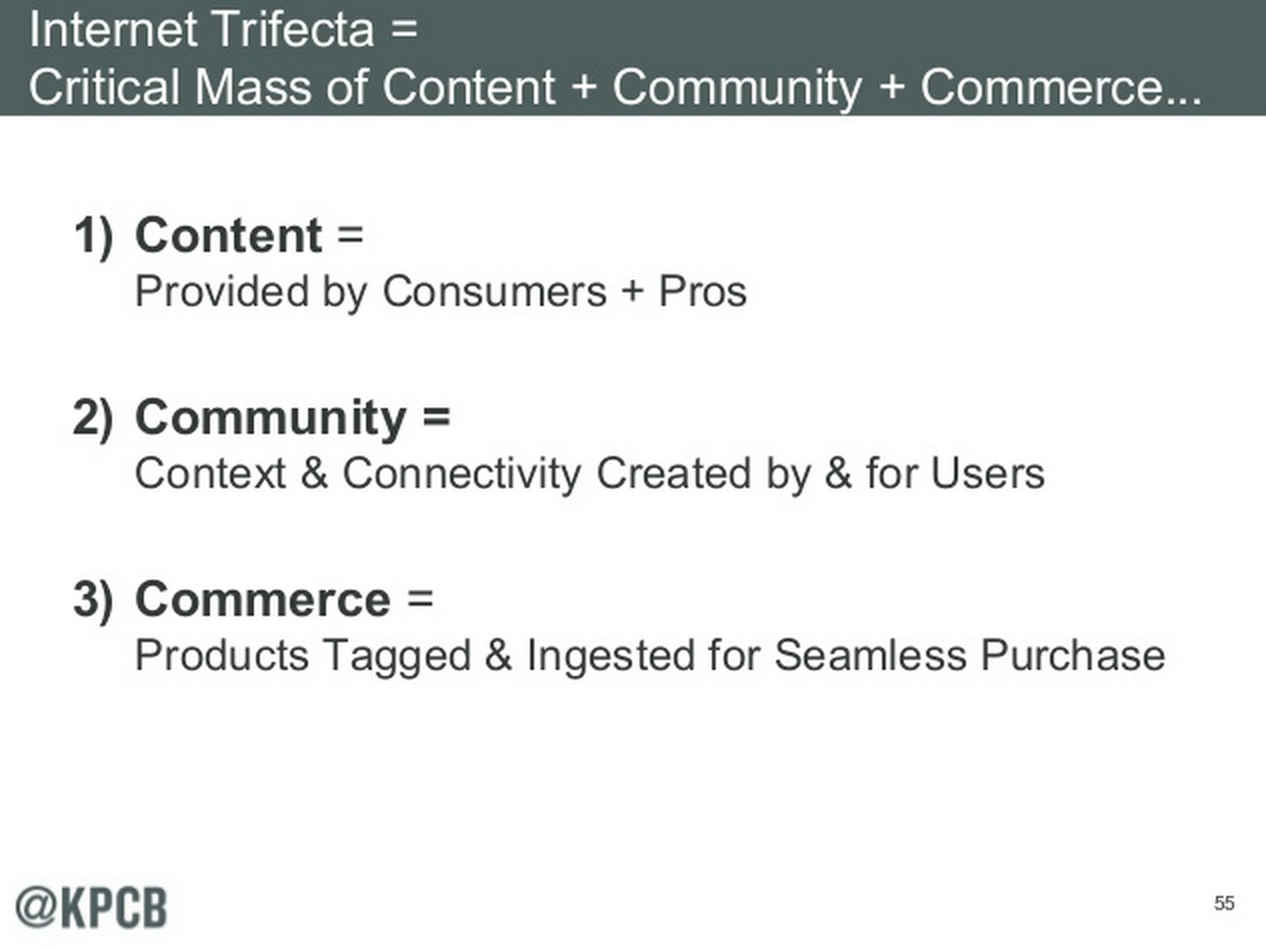 Content is infiltrating all aspects of the business world and creating a deadly trifecta integrated with community and commerce. Meeker gives the example of Houzz, the home ideas and design portal. The site sells goods and also gets millions of views per month for its community and content. The combination is deadly effective and upending the traditional homeware retail categories.

2. We’re nowhere near the top of the rise of mobile 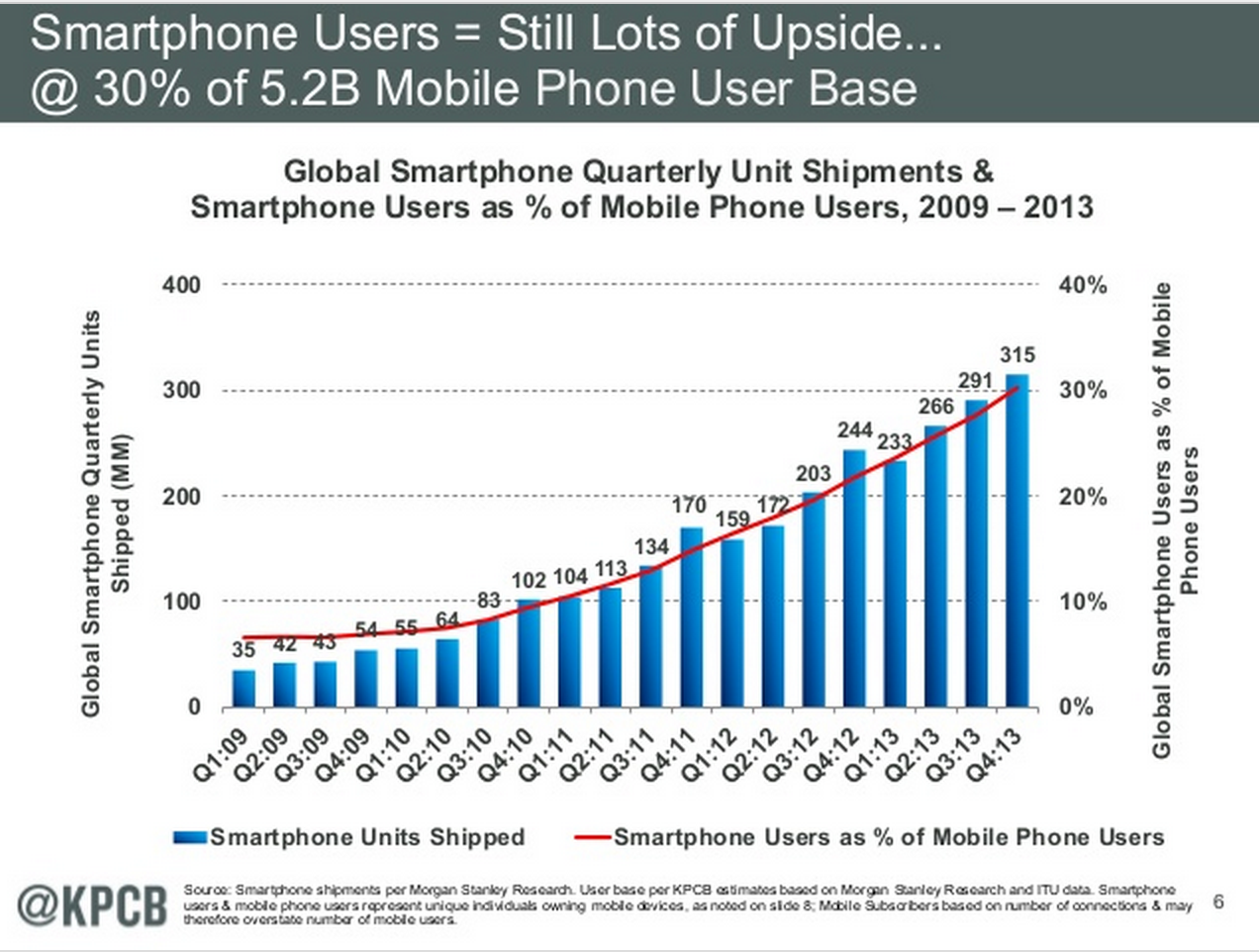 The mobile revolution has been fast, cheap and effective, and it’s changing both how—and how much—people consume content. As this slide shows, it’s also far from over. Expect that upward curve to keep rising all the way up to 100 percent. Today it stands at ~30 percent mobile penetration globally. 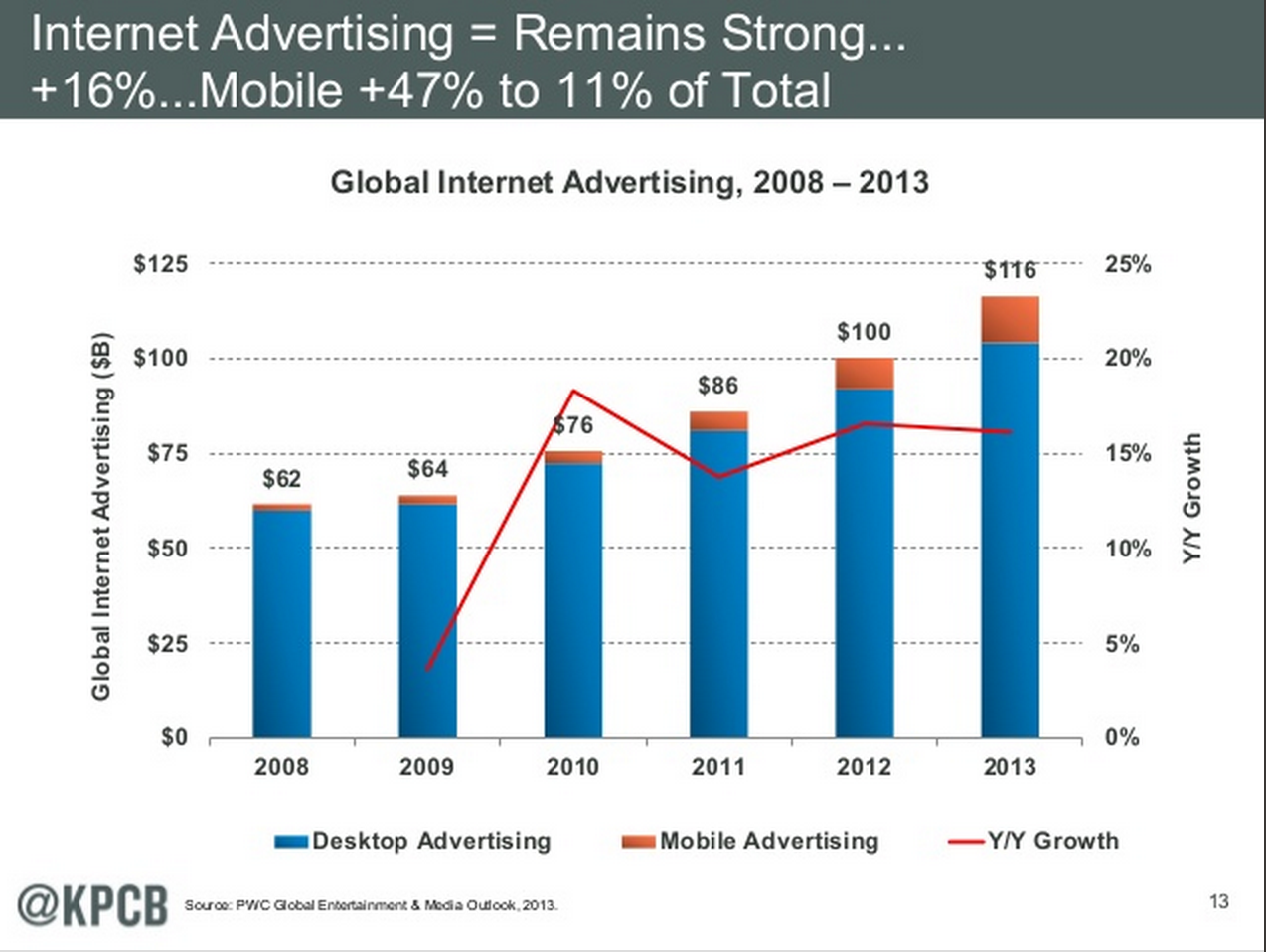 Mobile’s still a nascent adverting channel, too. As these slides show, YOY growth on mobile continues to rise briskly. But the spending is still dramatically less than that for desktop, even when time spent on mobile and desktop is converging. Expect mobile advertising to continue to grow up and deliver increasingly potent returns.

4. Image and video sharing is exploding 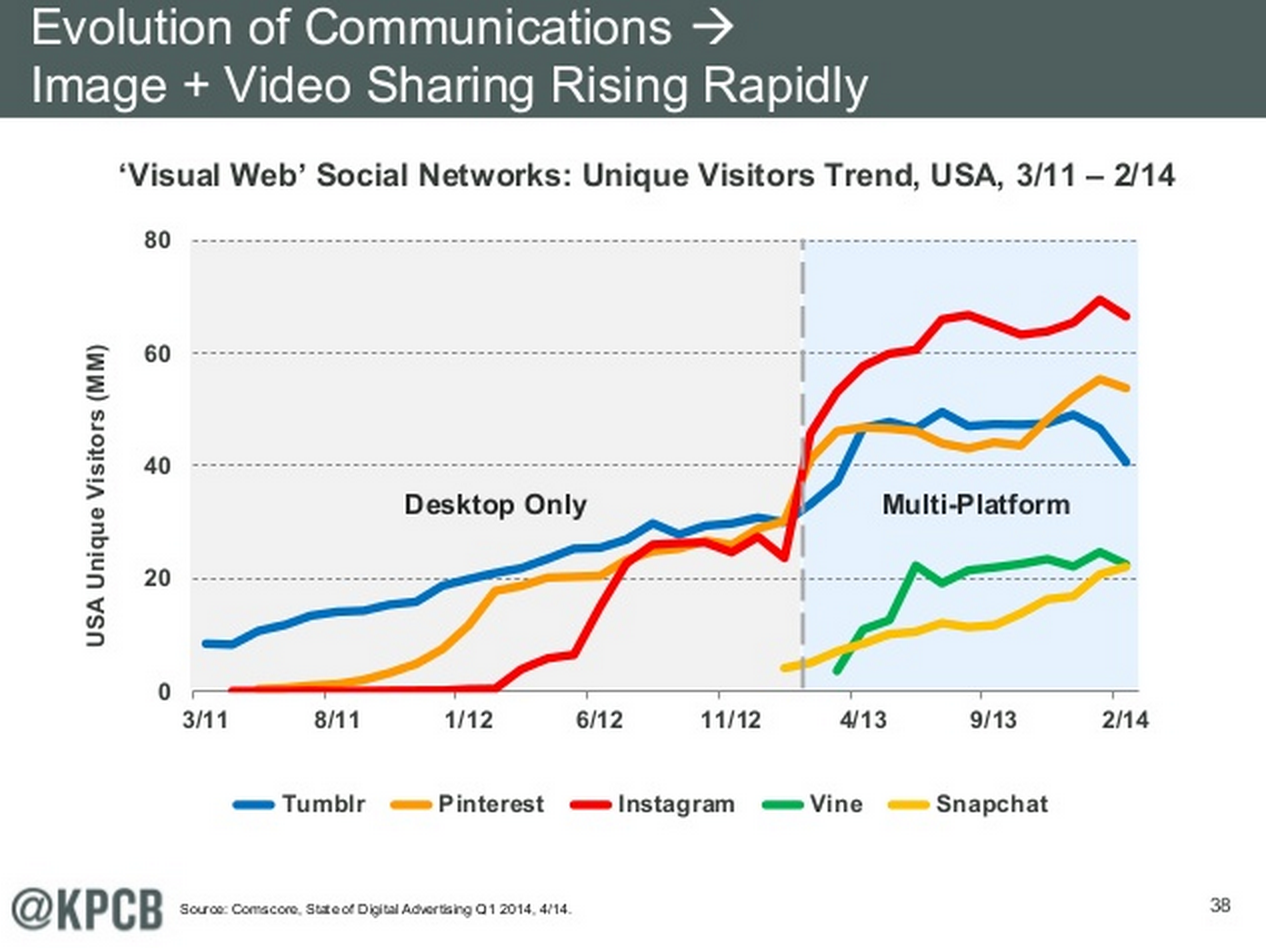 As we’ve frequently written on The Strategist, image and video sharing is rocketing. As more platforms for sharing come along, the pace keeps up. This year, there’s no doubt that another platform will emerge where video and image sharing explodes, much like what we saw with Instagram, Vine, Pinterest, and Snapchat this year. 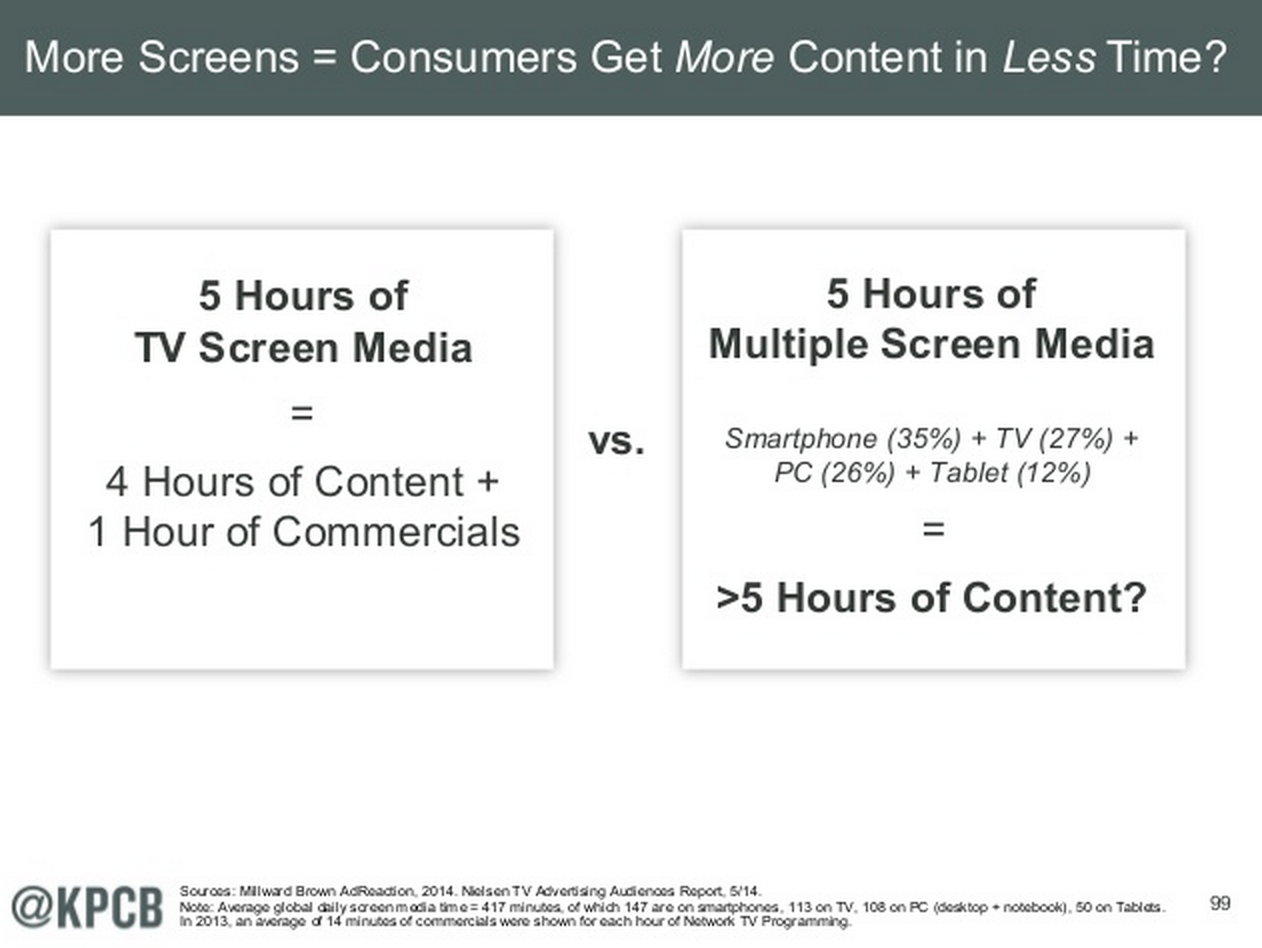 Video is taking off on YouTube at a phenomenal rate. In one slide, Meeker points out that new YouTube stars get tens of millions of views and millions of subscribers, sometimes within a few weeks. We’ve never seen that kind of repeated platform subscription growth with video before. Overall content consumption is not zero-sum game, either. As the above slide shows, as consumers add screens to their device list, they tend to consume even more content than before. That’s good news for content strategists.

What in the report stuck out to you? Tell us @Contently.

What’s the deal with The Content Strategist? It’s something we created at Contently because we believe in a world where marketing is helpful and where businesses grow by telling stories that people love. Learn more.