How Red Bull, Amex, and Dove Win by Proudly Branding Their Content

Welcome to the fourth post in our Contently Labs series, where we answer common questions we hear from current or prospective brand publishers. Today’s question: “How strongly should I brand my content?”

If Beyoncé worked in content marketing, she might sing, “If you liked it then you should have put your brand on it.”

As investment in content marketing grows rapidly, many brands are grappling with the question of how strongly they should brand their content. Recently, Contently’s Shane Snow argued that strongly branding your content just makes good business sense. “[T]hose who argue against transparency are shooting themselves in the foot,” Snow wrote. “It doesn’t matter how good branded content is if the brand doesn’t get the credit.”

But does that bear fruit in practice? To find out, we examined three masters of branded content that win by proudly putting their name on their stories.

AmEx OPEN Forum: Small business, brought to you by a brand

For a 160-year-old company, American Express manages to keep a fresh approach with their content marketing strategy, best exemplified by the success of OPEN Forum, their online platform for small business owners.

At first glance, OPEN Forum looks like a standard entrepreneurship blog: sleek design, contributor headshots, and comments and questions from readers. But it’s also hard to miss the fact that all of this is being brought to you by American Express. (Full disclosure: American Express is a client of Contently.) 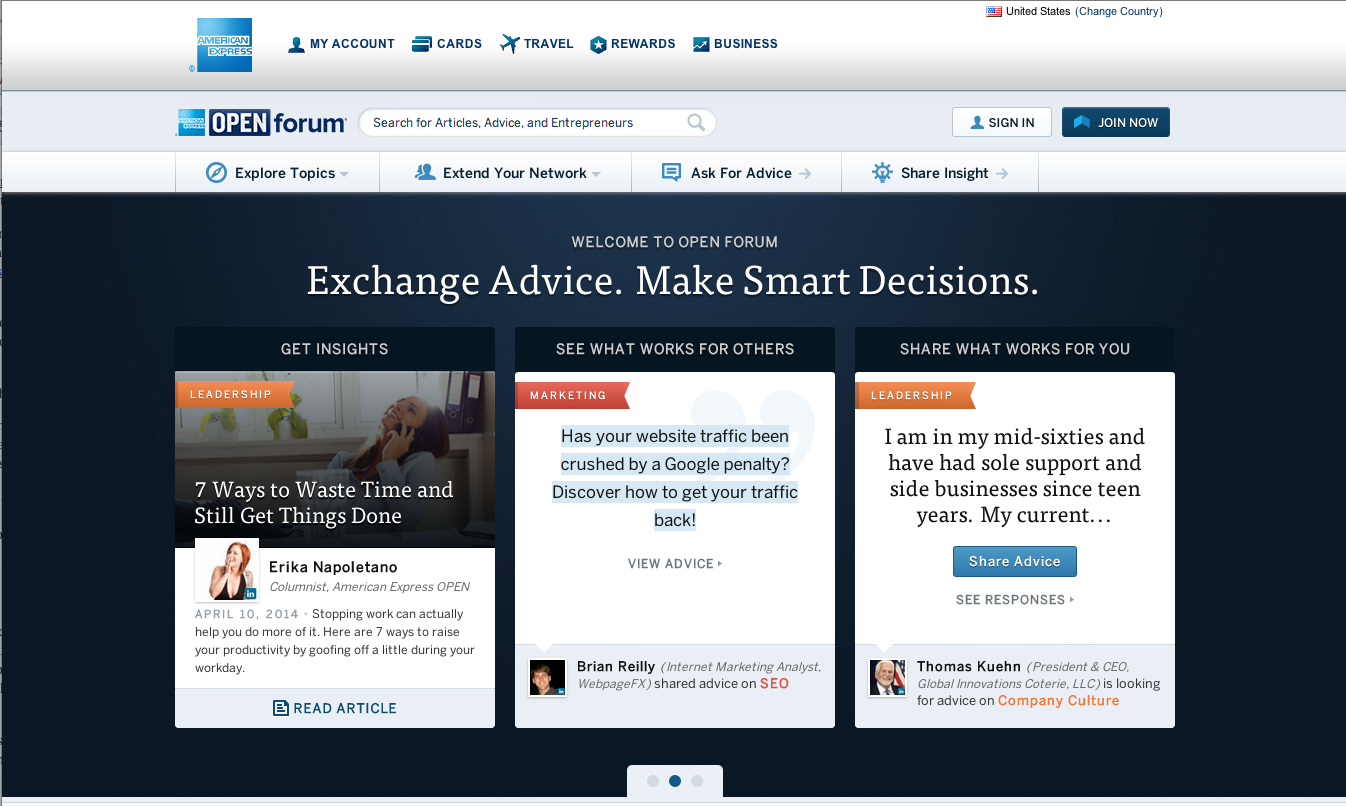 In fact, Amex is so up-front about sponsorship of the content, they brand their promotional materials within their own website—separating it from purely editorial content.

“We do also create some content that is more in the vein of sponsored content from OPEN, but that is a relatively small part of our editorial mix,” Parker said. “And even when we create pieces that are focused on our own business, we try to make that incredibly clear from the outset.”

Thus far, customers have bought into the clarity and honesty that comes from American Express’ transparency.

“Being in the credit card business, we want business owners to succeed and to use our products,” Parker added. “We also know that people who are engaged in OPEN Forum and with the OPEN brand tend to become more loyal American Express Card Members, thus driving our core business.”

For those familiar with Red Bull, the brand’s logo embodies action, adventure, and sports. This high-energy vibe is consistently present throughout Red Bull’s oeuvre. Since 2007, Red Bull has produced 50 sports and adventure films, a wildly popular YouTube channel, a lifestyle app, a record company, and a magazine, The Red Bulletin, with over 5 million subscribers.

In almost all Red Bull Media House productions, regardless of the platform, the company’s signature red, gold, and blue logo is prominently displayed. The branding can be seen in the upcoming ski documentary Days of My Youth, produced by Red Bull Media House and MSP Films. Almost every aspect of the film and the website carries the Red Bull mark. The featured athletes wear and use Red Bull branded gear; even the video play button incorporates the logo.

In addition to the logos, viewers will also notice Red Bull’s breathtaking aerial shots of extreme skiers sliding down the slopes and extreme close-ups that put you right in the action. The visuals are so crisp you may find yourself ducking in a computer chair.

The sneak peek videos for Days of My Youth have already generated more than 600,000 views on YouTube—numbers that rival view counts of trailers for major studio releases.

The buzz around the film is to be expected, especially since Red Bull’s previous ski documentary, McConkey, premiered at the 2013 Tribeca Film Festival and currently sports an 8.4 rating on IMDB.

According to Red Bull Media House, these compelling stories with impressive production value are meant to inspire the audience. In an interview a company representative told me, “Audiences who are inspired and engaged with memorable experiences on multiple levels are going to then eagerly look for the next story, the next film, the next stream.”

In other words, a satisfied audience will keep looking out for that little red bull charging ahead.

Dove cleans up with “Real Beauty”

According to Dove Skin Global Brand Development VP Fernando Machado, when you say the word “dove” without context, the first thing people think of is soap. Not birds. Not chocolate. Soap.

At last year’s Brand Innovators Summit, Machado spoke about his experience with word association: “Then you say, ‘Tell me something more,’ and they’ll go, ‘Um, real women, real beauty.’”

Machado was one of the branding executives behind Dove’s 2013 viral campaign, “Dove Real Beauty Sketches,” that produced a short documentary-style video showing an FBI-trained sketch artist illustrating the same woman twice—once based on how a stranger described her, once based on how she described herself.

At the climax of the video—now the most-viewed brand video of all time—the artist shows each woman the sketch of her description, side by side with the sketch based on the stranger’s take. To the women’s surprise, the strangers who described them downplayed or completely ignoring their self-perceived flaws. The video ends with the text, “You are more beautiful than you think.”

The branding in the video appears subtly: The viewer sees Dove’s blue and white color scheme weaved into wardrobe choices, set design, and text presentation before the company logo appears at the end. And, of course, “Dove” is in the title of the video.

With just the right amount of branding, Dove is able to make a strong impression on their audience. Less than a year later, they followed up with “Selfie,” another documentary about the perception of beauty, which debuted at the 2014 Sundance Film Festival. The messaging in both videos is strong enough for people to associate “real beauty” with the brand. And this effective strategy has been Dove’s approach for how to brand beauty for close to a decade.

American Express, Red Bull, and Dove treat their branded content with the same level of quality and effort they’d give to any tangible product or service in the marketplace. And they pair that commitment to intelligent storytelling with their recognizable logos, company colors, and visual styles.

These three companies have more than just buyers and customers; they have large, loyal followings eager to check out whatever they’ll come up with next. And best of all, they get full credit for serving up great content.

The Pros, Cons, and Costs of the Top 10 Content Distribution Platforms

What’s the Difference Between B2B and B2C Content Marketing?