Why Is Twitter’s Referral Traffic So Freaking Low?

Everyone’s talking about Twitter’s crash on the last day of SXSWi, but what about its plummeting place in the social referral traffic standings?

Twitter’s popularity among the cool kids of the Internet — that is, the younger, better educated, more tech savvy population — has long contributed to an air of superiority around the social network. Sure, there are fewer people on Twitter than there are on Facebook, but they make up a virtually pre-targeted audience for publishers. They’re the readers of the world, the knowledge-hungry, the engagement astute. They are the quintessential content consumers.

But the data paints another picture. A January Shareaholic report revealed that, in December, Twitter drove just one-fifteenth the amount of referrals to publishers as Facebook. It even falls significantly behind Pinterest. Those figures jive with a Pew Research finding that just eight percent of Americans get their news from Twitter, compared with the 30 percent who get their news from Facebook. 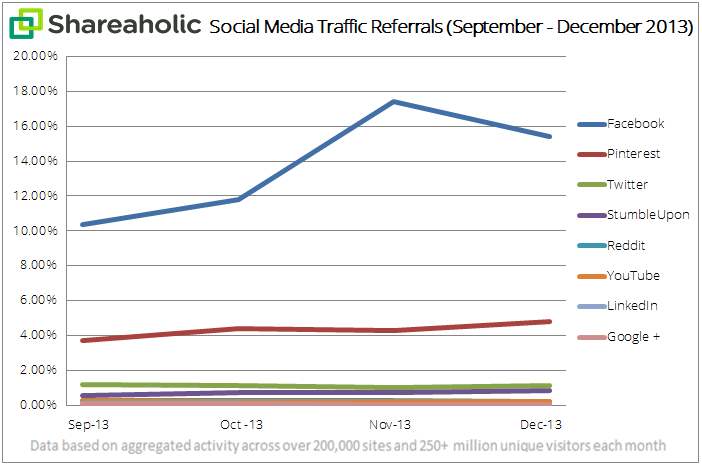 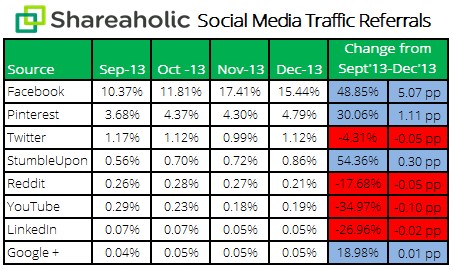 “Yet journalists — and, quite often, the organizations that employ them — clearly prefer Twitter,” wrote Ezra Klein in the Washington Post’s Wonkblog. “They put enormous effort into building Twitter brands and coming up with Twitter strategies.”

So what gives? Arguably, the most glaring possibility is that Twitter doesn’t have the value for publishers that we’ve been pretending it does, and everyone should adjust accordingly. But Twitter’s defenders are stanch. Could there be a good explanation for the data? Maybe. Possibly. There are definitely some theories.

We all know the spiel: Twitter isn’t about direct traffic; it’s about engagement.

“Twitter has a number of different uses,” said Matt Owen, Head of Social for Econsultancy. “Think of people who are live-tweeting with a TV show for example. They’re quite engaged, but there wouldn’t be any direct, measurable referral traffic.”

But — and there is a “but” here — isn’t engagement the goal of every social network? And, for what it’s worth, more top brands are getting better engagement rates from Facebook than Twitter anyway. Twitter’s edge was supposed to be its ability to drive content. As TechCrunch said, the network “has made a name for itself as the de facto sharing network with URL shorteners abounding and real-time, concise flow of information.” With one-tenth of Facebook’s referrals, Twitter does not seem to be living up to that name.

General statistics be damned, individually, a number of brands insist Twitter drives more of their traffic than Facebook does. With The Content Strategist, for instance, traffic from Twitter outpaces Facebook by a ratio of four-to-one. If it’s working for some, why aren’t everyone’s stats higher?

“I have total respect for Twitter,” Owen said, “but often I’ve thought that they created Twitter and weren’t entirely sure what to do with it. A lot of the innovations on Twitter all came from the audience using it. They need to do more to educate people on how to use their network really effectively.”

Facebook, on the other hand, takes flak for being the Big Brother of social media, carefully controlling how brands use its features. Perhaps such heavy-handedness has in fact made the network foolproof for brand success (though many now have to pay for the privilege). If Twitter wants to foster better results for brands, they could consider becoming more hands-on, offering tools like Facebook’s portal for businesses or Pinterest’s business blog to tutor brands on best practices and tips.

The data is difficult to measure

“Generally speaking, I tend to assume you can only measure the minimum value of Twitter,” said Owen. “Every time I do a social media report, I’ll say, ‘we definitely saw this much traffic, and we probably had this much.'”

That’s because, he noted, outside referral links are often pasted into Twitter, burying their true origin. And while Twitter did add website analytics to its dashboard last year, it did so quietly, again not going out of its way to help brands find and use the function. Should companies be able to track their own referrals? Yes. Do they always do so accurately? No.

It’s hard to be king in a democracy

Even more beneficial than Facebook’s business resources has been its algorithm that favors publishers, skyrocketing many brands’ referrals. For most of Twitter’s history, algorithms have not been a part of the equation. Users see the posts of those they follow chronologically and in real time. That democratic approach might please the public, but brands, not so much.

The good news for brands — and Twitter’s referral rates — is that the democracy is getting a shake up. With the acquisition of MoPub, the data-rich network has the ability to deliver finely targeted content to just the right users. The move is not to be understated, being called a very big deal by a number of social media observers.

Could this be the beginning of Twitter’s comeback on the referral charts? Facebook isn’t exactly resting on its laurels with its recent release of the brand content-heavy Paper app, but Twitter is at least starting to make the competition more interesting. And considering how fierce Twitter’s supporters are, even when the data looks dire, any uptick in traffic should be welcome news to many.