Like everyone else, I downloaded Lulu for one reason: to mock every guy I know. Hashtag ratings like #CantIkeaFurniture, #ProcreatedandEvaporated or #OwnsCrocs feel like a tiny strike against the guy who never called or the ex who never returned your West Wing DVDs (you know who you are, Keith Barrenger).

Lulu has been called the “Yelp for men.” It invites female users to “rate” the guys in their lives, and empower their single sisters to make informed dating decisions. Additional benefits include feeling really awkward upon discovering that your coworker is #kingofdowntown and a surprisingly effective mobile content strategy.

Apart from a few graphics, Lulu’s blog is pretty sparse, but where they really shine is in mobile content. “Dear Dude” is a semi-weekly dating advice column written and curated by the anonymous “Dude.”

Due to my appnesia (an infectious viral disease that causes users to download and then instantly forget new apps), Lulu was shoved away in an obscure app folder … until I started getting notifications that led me to “Dear Dude.”

Instead of the conventional, crap dating advice from writers who spout cliches like a broken fire hydrant (or that guy in digital marketing you went out with once), the anonymous Dear Dude offers quippy, straightforward relationship and sex advice. Since I am over age 12 and not a character on the CW, I don’t frequent many advice columns, but for some reason, this one sucked me in. The Dude’s sex tips crackle with wit, and his relationship advice offers real insight into modern dating. 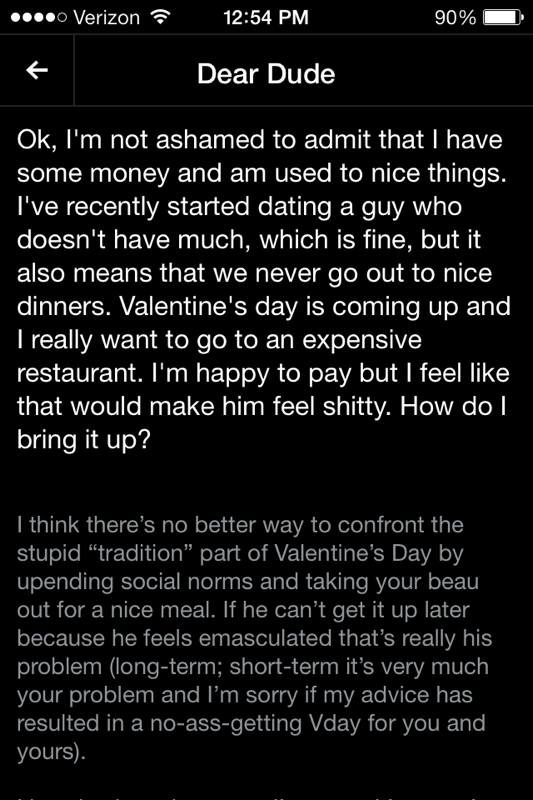 A recent column featured a user grappling the age old problem: Girl meets boy; girl makes more money than boy. Will boy be emasculated if girl drops the cash for them to go out on Valentine’s day?

Dear Dude, in his unexpected wisdom, replies “Doesn’t make me feel like less of a man — makes me feel like she is more adult, sure of herself, and above all, considerate. It also makes me feel appreciated. Like most things in life, I think your success in this affair will depend on your approach.”

Lulu’s branded content probably won’t win any literary awards, but they are doing the one thing that everyone else is fumbling to figure out: Speaking the same language as their audience and winning their affection.